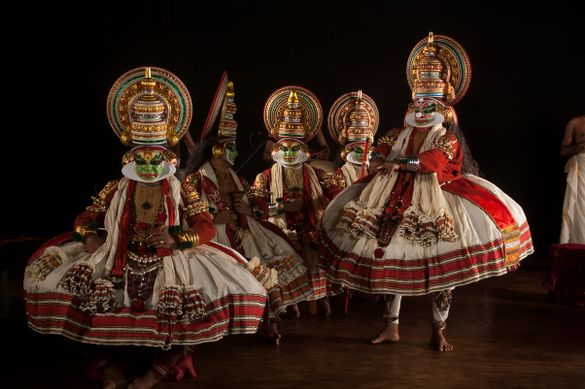 Indian culture is full of unique customs and traditions that are waiting to be explored. These cultural aspects differ widely across India’s 28 states and seven territories, and many of them stem from ancient Indian scriptures and texts, which paved the way of life in India for centuries.

Our guide is here to show you some of India’s most popular customs and traditions, to give you a feel for this amazing country and to learn a little more if you’re planning to visit.

One of the most popular Indian greetings is Namaste, sometimes called namaskar or namaskaram, translating as ‘I bow to the divine in you’. This respectful way of saying hello, goodbye, and thank you has seen a e around the world huge uptake during the Coronavirus outbreak as an alternative to handshakes and hugs. The gesture is performed by placing the palms together in prayer pose in front of the chest, fingers pointing upwards, and making a slight bow.

Another popular saying is ‘Atithi Devo Bhava’, a Sanskrit verse from Hindu scriptures that translates as ‘the guest is equivalent to god’. In Indian culture, guests have always been given supreme importance.

You might also encounter the Indian head shake which can mean yes, thank you or indicate understanding, depending on the context of the conversation.

A joint family in India is where the entire family all live together, which can include parents, wife, children and occasionally relatives. At the head of the family is a ‘Karta’, a senior male or female who makes economic and social decisions on behalf of the entire family, and other relations can be equal, of mutual respect or teasing in nature. Income goes into a common pool, which benefits all members. Nowadays, economic development and urbanisation have led to an increase in nuclear-like families than joint families.

Arranged marriage is still a strong tradition in India. This dates back to Vedic times in 1500–1100 BCE where suitable matches from around the kingdom would compete in competitions to win the hand of a royal bride.

Every region in India has its own distinct cuisine with a signature dish or ingredient. It’s one of the best countries for vegetarian cuisine, which you’ll find predominantly in Gujarat and Rajasthan. Non-vegetarian options feature strongly in Bengali, Mughlai, North Indian and Punjabi cuisine, and Kerala in South India is famous for its delicious fish dishes.

You can always guarantee plenty of fresh ingredients, including wonderful herbs and spices used for flavour, aromas, to enhance colours and for healing properties.

Although many restaurants provide cutlery for tourists, it’s great to get involved with the Indian tradition of eating with your hands. As well as immersing yourself in Indian culture, your digestive system will thank you as it means you eat more slowly. Wash your hands thoroughly before and after, and use your right hand to eat.

The cow is a sacred animal in Hindu culture and is depicted in mythology as accompanying several gods such as Shiva on his bull Nandi, or Krishna, the cowherd god. The horns represent the gods, the four legs are ‘Vedas’ (ancient Hindu scriptures) and the udder is the four objectives of life – desire, material wealth, righteousness and salvation. Consuming beef or killing a cow is considered sinful, and it is illegal to slaughter a cow in several states.

Fasts (‘Vrats’ or ‘Upvas’) are a key part of Indian culture, as a means of giving thanks to Gods and Goddesses and of showing resolve and sincerity. It is thought that by going without the necessity of food you will cleanse yourself of sin. Fasts are observed through India on various days and on a range of religious occasions.

Exploring Indian temples is a magical experience, but there are a few things to remember before you visit. Many of these sacred buildings were deliberately built at places rich in positive energy from the magnetic wave lines of the Earth. Most temples feature one main idol, which has a copper plate called the Garbhagriha or Moolasthan underneath that absorbs and resonates this underground energy. Therefore, it’s good practice to have a bath or shower before entering a temple or at least washing your hands and feet to cleanse yourself of negative thoughts and evil influences.

Appropriate attire is really important, namely conservative clothing to indicate respect. Women should ideally wear a modest top and a calf or ankle-length skirt or trousers that will allow sitting comfortably cross-legged on the floor. Men should wear trousers and a shirt. Avoid wearing leather or animal skin of any kind, as this is offensive to practising Hindus.

You will also need to remove your footwear before entering places of worship to prevent any dirt coming into a cleansed and sanctified environment. A top tip is to choose shoes that are easy to remove. If you’d prefer to keep your socks on, that’s fine, just make sure they are clean and free from holes!

There are hundreds of festivals to experience in India, meaning that every day holds a new celebration. The huge variety of festivals represent India’s rich culture and traditions, with state-wide, religion-based, and community-focused festivals on offer.

Indian festivals can feature ornate idols in extravagant parades, specific food dishes, dancing and music, sacred rituals and vibrant colours. There are also well-being, yoga and walking festivals. Unlike many festivals around the world which can be boozy affairs, many ‘dry days’ where the sale of alcohol is prohibited fall on major national Indian festivals and occasions. Why not incorporate a festival into your tour for the chance to be part of community celebrations and create magical holiday memories?

Clothes in India depend on the climate, cultural traditions and ethnicity of each region. Both male and female clothing has progressed from simple garments covering the body (sari, dhoti, gamcha, kaupina, langota, lungi and loincloths) into intricate costumes used not only in daily wear but also on festive occasions, rituals and dance performances. You’ll see western clothing worn by people of all social levels in urban areas.

Traditional Indian clothing often showcases fantastic skills passed down from generations, including embroidery, embellishment and printing, as well as ornate textiles such as fine silk. Clothing may be worn in particular colours to represent a religion or a particular ritual.

India offers a wide variety of dance forms which vary throughout each state. The Hindu Sanskrit ‘Natyashashtra’ (text of performing arts) recognises eight Indian classical dances, which includes Kathak in North, West and Central India, with East India showcasing Sattriya from Assam, Manipuri from Manipur and Oddisi from Odhisa. In South India, you can witness the Kuchipudi in Andhra Pradesh, Bharatnatyam in Tamil Nadu, Kathakali and Mohiniyattam in Kerala.

These dance forms have dramatic narratives, with performers telling stories mostly from mythology through gestures and movement.

Indian folk dances are also based on stories, this time passed down through generations. These dances are popular in rural areas with performances showing the everyday life of villagers.

India is a land of many fascinating languages and dialects that can change even within a few miles. There are more than 19,500 mother tongues, 415 living languages, and 23 constitutionally recognised official languages in India. Hindi is spoken by 41% of the population, particularly in the north, and 12% of Indians can speak English as a second language.

Many people living in India write in the Devanagari script, developed between the 1st and 4th centuries. The script contains 47 primary characters including 14 vowels and 33 consonants and is written from left to right. The characters have symmetrical rounded shapes within squared outlines and are all written in the same case, without any capitalisation.

India has many great epics dating back many centuries in the form of stories, poems, plays and self-help guides. The two most famous Hindu epics are the Ramayana and Mahabharata, which both contain thrilling tales of gods and demons, love and war and chariots and kidnappings. These stories have been told and retold for thousands of years and play a huge part in Indian culture.

The Ramayana tells the story of Rama, prince of the legendary kingdom of Kosala, and follows his fourteen-year exile to the forest urged by his father King Dasharatha. The Mahabharata is the longest poem that has been written in Sanskrit. Both epics tell of good triumphing over evil and show the values of devotion, loyalty, sacrifice and truth.