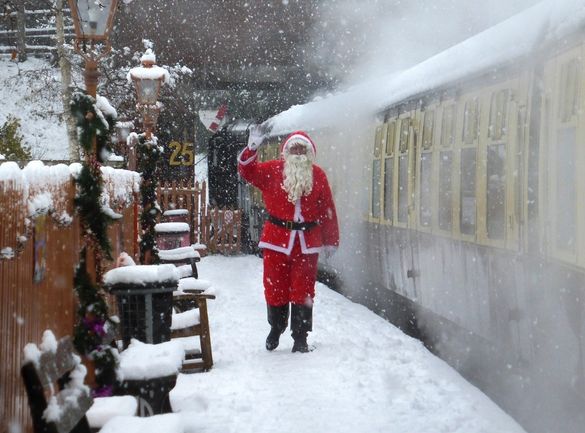 New for 2020, meet Santa and his helpers aboard a steam train this Christmas in vintage, festively decorated carriages whilst steaming through the capital on a circa 90 minute round trip. Departing London Victoria Monday and Wednesday 14th /16th /21st and 23rd December three times daily at 09.30, 12.00 and 14.15.

Each child, of course, receives a Christmas gift whilst adults can enjoy mulled wine in First Class, tea or coffee and a mince pie. Travelling with the Steam Dreams Rail Co. prices from £39pp or £139 for a family of four (at least one adult) in Standard Class or £49p and £175 family ticket travelling First Class.

The Steam Dreams Rail Co. also offers the option of Christmas gift vouchers from £50 with a choice of over 40 nostalgic days out by steam train planned for 2021 travelling to cathedral cities, coastal towns and historic sites across the UK. Delivered either by post or email, these trips will delight anyone with a love of history, nostalgia or unique experiences.

Covid-19 note : All on-train catering options and service will be guided, and possibly altered, to ensure compliance with the Covid-19 requirements that apply on the day of departure. The catering described is what we hope to offer.

All Steam Dream excursions are compliant with the current government guidelines on social distancing; hand sanitisers are available at every carriage door and in the lavatories; guidelines for passenger safety are sent with every e-ticket issued and prominent on the trains. Individual bookings that must be delayed due to Covid can be rescheduled to a later date with no amendment fee.

It is likely the engine pulling the Santa Steam Expresses will be Mayflower though one from the following; these are all vintage locomotives so it isn’t possible to absolutely guarantee their availability.

45212 is one of 842 ‘Black Fives’, as they became affectionately known, built for the London Midland and Scottish Railway. It is one 18 members of the class to survive into preservation.