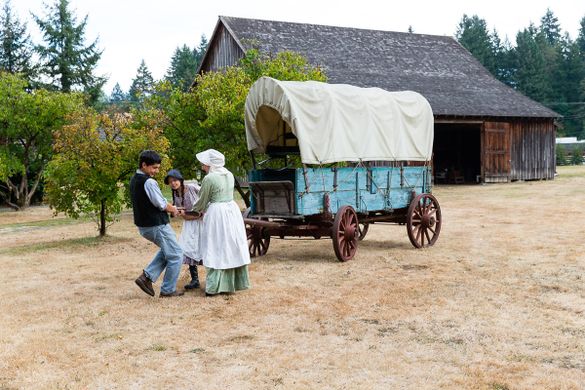 Oregon City, Oregon, June 28, 2018, — This year marks the 175th commemoration of the Oregon Trail. The 2,170-mile trail was a wagon route that stretched from Independence, Missouri to the official end in Oregon City, Oregon. Oregon’s Mt. Hood Territory has partnered with cities and states along the route to create a social media campaign that tells both the story of the trail’s history and life along the route today. Follow along at omht.us/oregontrail175.

As part of the campaign, 15 social influencers visited 17 cities along the Oregon Trail and explored various sites and museums with historical significance. They also met with local business owners, makers and leaders to tell their unique stories. From two women restoring and transforming 20 historic granaries into an antique village in North Platte, Nebraska to a brewer crafting heritage beers in Oregon City, these “Modern Pioneers” are carrying on the entrepreneurial spirit of the original Oregon Trail pioneers.

“The Modern Pioneer theme is critical to this campaign,” said Casey Knopik, regional public relations manager at Oregon’s Mt. Hood Territory. “We want to highlight the individuals who make each destination special. Learning the backstories of the people whose passions made those businesses come alive is what really makes a visitor feel connected to that community.”

Participating influencers posted their adventures on blogs and social channels and each collaborated by sharing the other influencers’ blogs in order to better capture the spirit of the entire Oregon Trail. Discover where you can step in wagon ruts on a golf course and drink fizzy water directly from a spring, find out which Oregon town with a population of just over 700 is home to two wineries and see what it is like to kayak to the second largest waterfall by volume in the United States.

“We want to inspire travel to each of the destinations along the Oregon Trail and encourage visitors to spend a few days experiencing these areas to the fullest,” said Knopik. “Their tourism departments have been terrific to work with and each city offers an amazing experience that you can only find there.”

About the Oregon Trails Coalition

The Oregon Trails Coalition is a collaboration of statewide and regional tourism partners to inspire visitors to experience the heritage trails in Oregon, specifically the Oregon Trail. The goal of the Coalition is to incorporate heritage tourism into the destination development plans and marketing strategies to ultimately raise awareness of the historical significance of the trails and create experiences that a variety of visitors will enjoy.