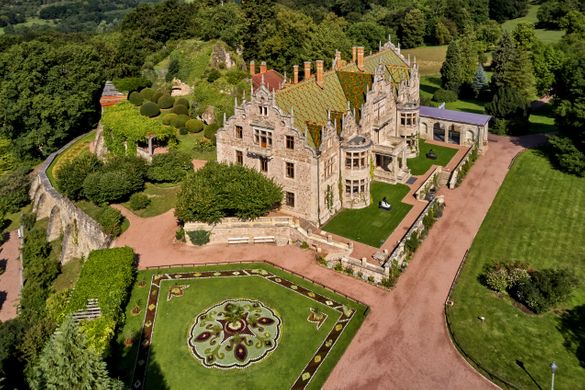 Words, music and nature – take a look at 2022 anniversaries and happenings in the Culture Heart of Germany, including special exhibitions, great music festivals and some delightful palaces, parks and gardens to put on your travel agenda.

Martin Luther: 500th anniversary of Bible translation
For anyone who hasn’t toured Thuringia’s stunning UNESCO-listed Wartburg Castle in Eisenach yet, this year is the right time: In 2022, Thuringia is celebrating the 500th anniversary of Martin Luther’s translation of the New Testament from Greek into German, a project the Protestant reformer worked on during his confinement in Wartburg Castle from 1521 to 1522. Printed in Leipzig in 1522, the “September Testament” rapidly became the most influential bible translation in Germany and has played a role similar to that of the King James Bible in the English-speaking world. It contributed significantly to the development of today’s modern High German language and is considered one of the foremost achievements of German literature. When attempting to create an English version of the Bible, the English reformer and contemporary of Martin Luther, William Tyndale, even learned German to read the translation.

Throughout the year, a range of exhibitions and events revolve around this key moment in German history, including the exhibition “500 years of the New Testament – Luther’s Translation” at Wartburg Castle (4 May to 6 Nov 2022), featuring original sources and multimedia installations. Eisenach’s Luther House, which has a permanent exhibition on “Luther and the Bible”, has added special content for the anniversary year with the recent acquisition of an Ai Weiwei sculpture, “man in a cube”, drawing attention to the formative power of Luther’s language and ideas. In Weimar, “Cranach’s Deluge of Paintings” exhibition (from 4 June 2022) in the town’s stunning Rococo Duchess Anna Amalia Library sheds light on the close relationship between the great Renaissance painter and Martin Luther and, alongside paintings, prints and medals, features the Luther Bible from 1534, one of the rarest and most lavishly illustrated copies that exist today.

Bach, Wagner and chamber music delights
Apart from presenting various projects paying tribute to the 500th anniversary of Luther’s Bible translation, Thuringia’s Bach Festival (8 April to 1 May 2022) will this year also feature a virtual reality project with the digital resurrection of Weimar’s 20-metres high court chapel, known as “castle of heaven”, where Bach composed most of his pioneering organ pieces. Over in Saxony, Leipzig Opera is putting on a veritable Wagner bonanza from 20 June to 14 July when all 13 of the composer’s operas will be performed in chronological order, with only the four parts of the “Ring” being excluded and following one another. Tip for music in unusual surroundings: Just outside Dresden, charming Moritzburg Castle, one of Europe’s most delightful baroque palaces, each year hosts the Moritzburg Festival (6 to 21 August) as one of the world’s leading chamber music festivals with top international performers.

Palace glory, garden delights
Glorious palaces, parks and gardens abound in Saxony and Thuringia and visitors can tour the region on a route lining up grand residences, fortifications and splendid green spaces. Or build their own itinerary to see off the beaten track beauties such as delightful Altenstein Palace and Park in Thuringia, which was remodelled in the style of an English manor house and is surrounded by a huge landscape park with stunning vistas and hidden architectural gems. Also in Thuringia, the charming ensemble of the three Dornburg Palaces sitting high above the valley of the Saale river features three distinct gardens and lots of roses. In Saxony, UNESCO-listed and very romantic Muskau Park is a visitor favourite. This masterpiece of English landscape design features lakes, a small river, hundreds of thousands of trees and even a palace, all arranged as if in an oversized painting. Anyone on a city break to Dresden, should check out Grosssedlitz Baroque Garden southeast of the city. The grand ensemble in the French formal garden style is known as the “Versailles of Saxony”, with magnificent buildings such as the Upper and Lower Orangery, outside staircases, water features, sandstone sculptures, decorative vases and exotic plants as well as 400 potted plants. Tip: The beautiful town of Torgau with its splendid early Renaissance Hartenfels Castle will host a regional garden show from 23 April to 9 October 2022. The town was also a centre of the Protestant Reformation in Germany, with Martin Luther consecrating the castle chapel as the first newly-built Protestant church in 1544.

Notes to the Editor

All major airlines to Berlin or Frankfurt with onward rail connections.