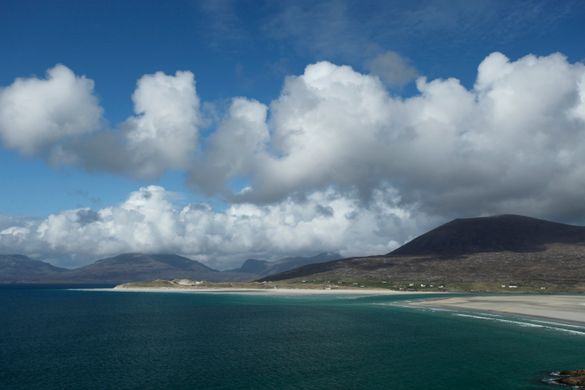 Get a bucket and spade at the ready…

With stunning coastal views, white sands, waves that are surf-ready, and family-friendly activities, Scotland’s beaches are where it’s at this summer. Just add in some tasty fish and chips, an ice cream, and perhaps a sandcastle-building competition, and everyone can create holiday memories to last a lifetime (not forgetting four legged friends….)

Not sure which Scottish sands to explore?  Read on for more information….

Luskentyre on the Isle of Harris is regularly included in lists of the most beautiful beaches* and it’s not difficult to see why: with miles of white sandy beach and clear blue water, visitors to the island may be forgiven for imagining they are visiting a Mediterranean archipelago. It is certainly one of the most spectacular beaches in the Outer Hebrides. Incidentally, anyone travelling to the Outer Hebrides can enjoy the unique experience of travelling by plane and landing at the beach airport at Barra.

St. Ninian’s Isle in Shetland is a stunning tombolo (a natural sand causeway with sea on either side) on the west coast of Shetland, linking the South Mainland with the Isle. The beach itself is often compared to beaches in the Caribbean, and there is an archaeological site located on St. Ninian’s Isle. If that wasn’t reason enough to visit, Shetland has been chosen as one of the places in the world with the best sunrises**.

Calgary Beach on the Isle of Mull is a haven of white shell sand and blue sea, a picture perfect impression of what a beach in the Hebrides should look like.

Similarly, the stunning beach at the Bay of Skaill on the west coast of Orkney should be on everyone’s list of must-visit beaches, being as it is close to Skara Brae, which has been designated a UNESCO World Heritage Site.

Film-fans will recognise West Sands Beach in Fife from the opening scenes of the Oscar-winning film Chariots of Fire, set against a stirring Vangelis score. The beach stretches out for two miles, within walking distance of St Andrews town centre and world-famous golf courses.

For breath-taking tranquillity, it would be hard to match Achmelvich beach in Sutherland.  Located on the now legendary North Coast 500 driving route, the unique morphology of the area means there are many nearby walks and climbs, including the famous Suilven, for those interested in hiking.

Kippford Beach in Dumfries and Galloway is the perfect seaside retreat for families located at the friendly town of Kippford, near to Castle Douglas, on the Solway Coast. It is certainly unique as the beach is made up almost entirely of cockle shells.  The coastal walk from Rockcliffe to Kippford is also a great addition to any trip.

North Berwick Beach in East Lothian has long been a favourite seaside escape for families, located only 25 miles from Edinburgh City Centre. With plenty of shops, cafés and the Scottish Seabird Centre close by, a trip to the beach at North Berwick is the perfect day out.

Who knew Aberdeen had dolphins? Yes, visitors to Aberdeen Beach might be lucky enough to spot one of the happy animals in the sea. Aberdeen is home to one of the greatest coastlines in the world. A 165-mile-long strip which includes golden sandy beaches, hidden caves and rugged cliffs. Described by National Geographic as ‘one of the world’s outstanding coastlines’ thanks to its areas of natural beauty, featuring puffins, seals and dolphins, set against an unblemished backdrop of big skies and deep blue seas.

Surfers’ favourite Tiree is the most westerly island in the Inner Hebrides.  Lovingly referred to as the ‘Hawaii of the north’, Tiree is perfectly placed to catch the swell from the North Atlantic, giving year-round, consistent waves to catch. The island’s many white sandy beaches face every direction, so even if the waves aren’t quite right for surfing on one bay, they’re likely to be ideal on another. There are also plenty of local surfing schools to cater for all levels.

Thurso in Caithness is also an ideal place to hit the waves, as the northerly tip of the Scottish mainland is known for providing the most consistent and best quality waves.

With sand dunes, a golden beach and a shallow sandy bay, the beach at Applecross in the north Highlands is the perfect place for four legged friends to sniff about, allowing their owners to enjoy gorgeous views across to the Hebrides.

In addition, Irvine beach in Ayrshire has plenty of grassy sand dunes and is far away from the road to let dogs off the lead.  It’s a popular spot for dog meet-ups and dog walking clubs.

Finally, pups will have great fun splashing around at the beach at Luss in Loch Lomond, with their owners having plenty to choose from for dog-friendly cafés close-by, including the Coach House Coffee Shop

For more information on things to do in Scotland visitwww.visitscotland.com