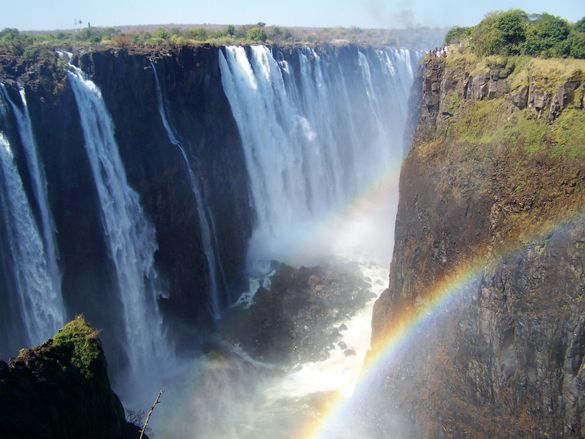 Leading adventure travel specialist, Acacia Africa has updated its top 10 list of the most popular destinations to visit in East and Southern Africa*, Zimbabwe surging up the poll to first place. One to watch in 2020, the country received the Hollywood seal of approval this past December, Michael Douglas and Catherine Zeta-Jones choosing to celebrate their festive season at the Victoria Falls. South Africa is another country that is likely to draw more travellers to its shores, Cape Town currently hosting ITV2’s Winter Love Island. Timely news, Acacia’s new Signature Safaris & Tours focus on the Rainbow Nation and neighbouring eSwatini – the collection including 11 itineraries.

According to the tour operator, ever since its political fortunes changed in late 2017, Zimbabwe has been slowly making its way back onto bucket lists, and 2020 could be its best year yet, with hotel demand at Victoria Falls reportedly up by 25%.

Arno Delport, Sales & Marketing Manager at Acacia Africa, comments “Still crowd-free, there’s an added incentive to visit Zimbabwe, under-tourism well on its way to becoming a major travel trend. The main highlights are the majestic falls, the country offering what are arguably some of the best views (15 points in all); Hwange, one of the largest elephant populations in Africa residing in the national park, and The Great Zimbabwe National Monument, the ruins second only in size to the Egyptian Pyramids.”

The 14-day Mozambique & Zimbabwe Explorer northbound includes a guided tour of The Great Zimbabwe National Monument and wildlife viewing at the Hwange and Matobo national parks, with the final two days spent at the Victoria Falls. 2-FOR-1 OFFER: SAVE £1,835 (£917pp) From £918pp (no single supplement) + Adventure Pass from £160pp including all highlights, transport, camping accommodation, 36 meals and services of a tour leader and driver. Book by 29 February. Starts Pretoria  – ends Victoria Falls. Full tour price before discount £1,835pp. T&Cs below. Departures March through December.

South Africa has climbed back up the list from ninth to fifth place, the country reaffirming its status as a family-friendly destination after the government waived the UBC (unabridged birth certificate) requirement for foreign minors. Boosting its profile with younger adventurers, “Winter Love Island”* is currently broadcasting from Cape Town, and even more reason to go, 11 February will mark the 30th anniversary of Nelson Mandela’s historic release from Victor Verster Prison – the six-day Wild Coast & Garden Route Adventure stopping in Mthatha, a focal point of the Nelson Mandela Route. One of 11 itineraries in Acacia’s brand new Signature Tours & Safaris collection, the escorted group trip starts in Durban. Predicted to be another of this year’s travel hotspots after surfing makes its Olympic debut in the Tokyo 2020 games – its iconic landmark, the Golden Mile, is a haven for visitors keen to ride the waves. Additional eco-friendly pursuits include hiking in the Oribi Gorge Nature Reserve, game driving at the Addo Elephant National Park (the only national park in the world to conserve the Big Seven) and nature trekking the Tsitsikamma National Park (one of the largest and oldest restricted (no-take) marine protected areas in the world). And, not forgetting the country’s fascinating food and wine culture, the itinerary also includes a visit to a local winery in the Cape Winelands (the Cape Winelands listed in Lonely Planet’s “Best Value” top 10 for 2020) before ending in Cape Town. From £1,075pp (two sharing) including all highlights, transport, accommodation (three and four-star twin/double share accommodation with en-suite facilities), 10 meals, and services of a tour leader and driver. Starts Durban – ends Cape Town. Max. group size: eight.

One of the main gateways into eSwatini, South Africa borders the kingdom to its north, west and south – renewed interest in the Rainbow Nation bound to translate into increased tourism for the Swazi people. Ripe for the growing number of under-tourists who are mapping out less well-travelled places (this group including more adventurous parents), the Lonely Planet favourite is still rarely visited by neighbouring South Africans, and for now, it remains crowd-free. Blending the cultural with the creative, the NEW six-day Kruger Swazi & Wild Coastmakesstops at the Ngwenya Glass Factory, Swazi Candles and the Swazi capital of Mbabane – these visits combined with safaris in South Africa’s best national parks and more intimate private game reserves. The Balule Private Game Reserve, Zulu Nyala Private Game Reserve, Kruger National Park, Hluhluwe Game Reserve and iSimangaliso Wetland Park feature on the itinerary, the holiday ending with a relaxing river cruise on the St. Lucia estuary. From £1,225pp (two sharing) including all highlights, transport, accommodation (three and four-star twin/double share accommodation with en-suite facilities), 11 meals, and services of a tour leader and driver. Starts Johannesburg – ends – Durban. Max. group size: eight.

Kenya might have slipped from fourth to seventh place, but Acacia is predicting that the country will take the lion share of East Africa’s bookings in 2020, the destination strengthening its commitment to eco-tourism. Scheduled to take effect on the 05th of June 2020, Kenya is broadening its ban on single-use plastics in beaches, national parks, forests and conservation areas.

Arno Delport comments, “Sustainable travel is important to travellers, but the “Greta Thunberg effect has challenged us as individuals (young people especially), to become the driving force for change. That means giving greater consideration to the question of how and where we travel – David Attenborough’s upcoming documentary (David Attenborough: A Life on Our Planet, scheduled to be broadcast live in cinemas in the UK and across Europe on 16 April 2020) and Earth Day 2020 (the theme for its 50th anniversary on 22 April “Demand for Climate Action”), certain to make us even fiercer critics when deciding on our choice of holiday destination.”

Arno Delport, comments, “What Instagram does for travel, Sir David Attenborough does for the animal kingdom, and on the back of his recent successful documentaries, Kenya is set to be one of 2020’s most sought after destinations, the annual migration showcasing raw, untamed Africa at its most spectacular, the event already a major drawcard for first-time visitors to the continent.”

All prices exclude return flight. Independent flight prices available on request. Acacia Africa’s Adventure Camping and Adventure Accommodated Tours are aimed at travellers aged 18-39’ish (adventurers in their mid to late 40s to join if they wish). The operator’s Small Group Safaris and Signature Safaris & Tours are open age (from eight years).  Unless otherwise stated max group size is 24 and tours are year-round. Acacia offers pre and post accommodation and a wide selection of city breaks and short stays. Acacia Africa(020 7706 4700; acacia-africa.com) SATSA membership No. 1931, Atta membership no. 20151 and ABTA No. W4093 PROTECTED.

An adventure travel specialist, Acacia Africa, will celebrate 25 years of safaris in 2020.  The owner-operator has offices in the UK, Cape Town and Zimbabwe, the company leading tours (all of its guides born in Africa) across East and Southern Africa. Acacia’s complete collection includes Adventure Camping and Adventure Accommodated Overland tours (as of 2020, these tours are now open to travellers who are 18-39’ish, with the option for adventurers in their mid to late 40s to join if they wish), Small Group Safaris, Short Safaris & Treks, City Breaks & Short Stays, and NEW for 2020, Signature Tours & Safaris – the itineraries combining South Africa and eSwatini. Outside of their Adventure Camping and Adventure Accommodated product, the majority of Acacia’s escorted group tours are open-age and appeal to a wide range of wanderers including, adventurous families with children from eight years.

Poll II: 2019’s most popular destinations to visit in East and Southern Africa

Poll III: 2020’s most popular destinations to visit in East and Southern Africa

Terms and Conditions of 2 FOR 1 offer: This promotion applies to the normal 2020 Tour Price only. Normal Adventure / Safari Pass and Gorilla / Chimp Trekking Permit (if applicable) apply. Normal Acacia booking terms and conditions apply to all bookings. Seats are limited and subject to availability. 2FOR1 promotion cannot be used in conjunction with any other incentive, promotional discount, last minute discount or value plus discount. Promotional discounts are not combinable with value plus discounts.  2FOR1 promotion is valid on select adventure camping tours only departing between 02 January and 31 December 2020. 2FOR1 promotion is only valid for two clients booking and travelling together on the same tour and departure date. This promotion is applicable for new bookings only made from 02 January – 29 February 2020. Promo Code: BIRTHDAY_CELEBRATIONS_2020 Please quote the promo code at time of booking.

*  Love Island is said to have influenced previous travel plans, with OTA research claiming there had been a 23 per cent increase in British tourists flying to Majorca in 2018 compared to the previous year. In 2019, the ITV2 dating reality show was the most-watched programme on TV among 16 to 24-year-o