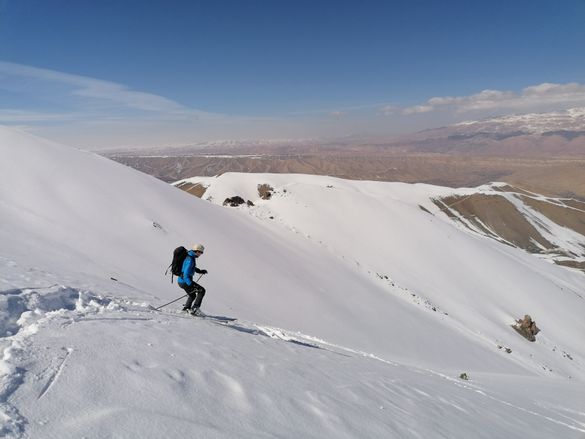 Afghanistan and Iraq are not the first countries most people think of when booking their ski holiday, but with many European ski resorts in restrictive lockdowns this winter, adventure tour operator Untamed Borders are offering up some alternative ski destinations for those still chasing the powder in 2021.

Untamed Borders organise trips to some of the worlds least visited and inaccessible countries, and their fixed date ski trips for 2021 are no different. With mountains that had never been skied before, Untamed Borders founder James Willcox saw a gap in the market for ski tours to Afghanistan, after first leading trips to the country in 2006. “2021 will be the 11th year that Untamed Borders have organised ski trips to Afghanistan” explains Willcox. “We feel grateful that we are currently able to organise trips to Iraq and Afghanistan and assist a little bit in stimulating the small tourism sector within these countries. We have been operating with new Covid-safe procedures to keep guests, guides, drivers and everyone else involved safe.”

The success of these ski touring trips in Afghanistan lead Untamed Borders to arrange dozens of other ski adventures over the last 10 years, taking over 100 people to some of the world’s most inaccessible slopes in Western China, Pakistan and Tajikistan, but Afghanistan and Iraq have always remained the most popular.

Ski Iraq
2021 will be the fifth year Untamed Borders have run ski touring to the slopes of Northern Iraq, after operating the first ever commercial ski trip to the area in 2017. For a country more associated with deserts, Iraq has some great mountainous terrain in the northern semi-autonomous Kurdistan region.

Around a three hour drive from Erbil, the capital of Iraqi-Kurdistan, this trip is based in the small city of Choman. Skiing among the slopes of Mt Halgurd, Iraq’s highest peak, this trip offers a chance to explore new ski routes, with a variety of terrain and plenty of snow. The trip coincides with the Choman Winter Festival, which was stopped under the rule of Saddam after running since 1952. Now restarted, the festival includes the Iraq Ski Ralley, a fun ski touring race through the Zagros Mountains, open for guests to take part in. The chance to truly blaze a tourist trail is a rare opportunity, and this trip offers just that.

Dates: 14 – 22 February, 2021
Cost: $2400 (Excluding flights)
Guides: Guided by a qualified international ski instructor with Iraqi local guides.
COVID-19 Information: No quarantine on arrival. Test required 72 hours before and on arrival. Some countries (UK and 7 others) currently banned due to second strain.

Ski Afghanistan
Deep in the Hindu Kush, lies the small town of Bamiyan, the best place for skiing in Afghanistan due to its good security and incredible scenery. Since first operating ski trips here in 2011, Bamiyan has had a ski revolution and now has four ski clubs and multiple ski races, including the Afghan Ski Challenge, which guests will take part in on this trip. Starting in Kabul, guests will be shown a few places of interest before flying to the beautiful and peaceful Bamiyan Valley to ski in the Koh e Baba mountain range. There will also be time to visit the remains of the world’s largest standing Buddha statues overlooking the town and the ancient sites of Shah e Zohak and Shah e Golghola.

Dates: 5-14 March, 2021
Cost: $2500 (Excluding flights)
Guides: Experienced English-speaking Afghan guides will lead the entire trip. The skiing will be led by a qualified international ski guide, joined by local Afghan ski guides.
COVID-19 Information: No quarantine on arrival. Test required 96 hours before transiting in Dubai. Untamed Borders can arrange test in Kabul on arrival with a 4-6 hour turnaround for $60.