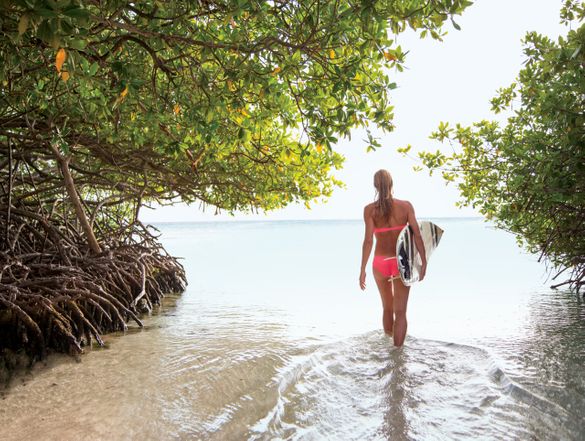 The Dutch Caribbean island of Aruba is famed for its award-winning beaches but after the trying times of the last year or so, it is reassuring visitors that it is also ideal for those relishing quiet moments of tranquillity, reflection and meditation.

Simply want to curl up with a good book under a shady tree with a soundtrack of rustling palms and gentle waves lapping the shore?  Then check out these hidden gems and secluded spots if you are looking for time to disconnect, reflect, or recharge.

Located along the limestone cliffs that anchor the northwest coast/Malmok area, Tres Trapi is just south of Boca Catalina, characterised by a set of steps carved into the rocks that lead to a small sandy cove.  It’s a favourite spot for sun lovers or for simply chilling on the limestone cliff in a beach chair with the mesmerising rhythm of the waves splashing along the rocky shore.  Take the steps down into the cove to cool off in the crystal-clear waters.  The snorkelling here is great as well.

The “new” natural pool near the ruins of a gold mill at Bushiribana on Aruba’s north coast was created probably hundreds of years ago by the tandem efforts of pounding surf and strong winds, so there’s clearly nothing “new” about it. It’s just that only more recently has its existence become common knowledge.

This hidden gem is entirely concealed from view, even when standing right at the edge of the limestone cliff that you have to descend to reach the pool. Of course, that makes finding the pool a bit tricky, so you can ask one of the vendors near the gold mill ruins to point you in the right direction, but you’re basically going to make your way over to the water’s edge, just a bit south of the ruins, and look for the top of the ladder that is poking above the edge of the cliff.

Once you’ve (carefully!) descended you’re going to make your way over the limestone…and what awaits is truly breath-taking: a gorgeous cove with turquoise water.  It’s very shallow and protected from pounding waves by a cluster of surrounding rocks.  When not enjoying a refreshing dip, there’s lots of smooth rocks to relax on and enjoy the unique atmosphere here.

Meanwhile, the cove and beach area at Wariruri is on the road/trail heading to the sea from Alto Vista Chapel.  The same forces of nature that created Wariruri also sculpted a natural bridge here. Wariruri is a popular place for local surfers to catch some waves. Local fishermen can also be seen fishing from the low cliffs flanking both sides of the beach.  Weekdays are a good time to enjoy some quiet moments here, as the local surfers are mainly here on weekends.

Located at the southern reaches of the island is Boca Grandi Beach.  Characterised by undulating sand dunes kept in place by low-lying sea grapes, it wraps around a bay where steady winds and a small, rolling surf beckon advanced kite surfers, particularly on the weekends.  During the week, there is hardly a soul here, allowing you to enjoy plenty of peace. You need to be a strong swimmer, though.

Sometimes dimmed by the popularity and grandeur of the popular California Lighthouse at the northern point of Aruba, the Colorado Point Lighthouse is located on the opposite end of the island, at the very southeast tip.  Although it is not the typical lighthouse—it’s a metal structure with a caged light—the Colorado Point’s elevation offers stunning, dramatic sea and island views.  There are a few paths to explore along the cliffs, with plenty of spots to relax and take in the magnificence and awe of the rolling sea.

Arikok National Park, Aruba’s national park and conservation zone, covers nearly 20 per cent of the island, making it the ideal place to roam and enjoy pristine and picturesque rolling countryside and coastline.  Head out for a hike on one of several marked trails, including Miralamar, where the trail leads you to a majestic hilltop with amazing views of the park and Aruba’s coastline.

You don’t have to be a bird watcher to enjoy the lush and peaceful surroundings of the Bubali Plas Bird Sanctuary, located in the high-rise hotel area, west of capital Oranjestad.  Aruba is home to more than 220 local and migratory species, with this fertile sanctuary offering birds a reliable food source, as well as breeding and nesting areas.  Sit back, relax, and let the sounds of Aruba’s nature bring balance and a sense of calm.

For more information about Aruba, go to www.aruba.com