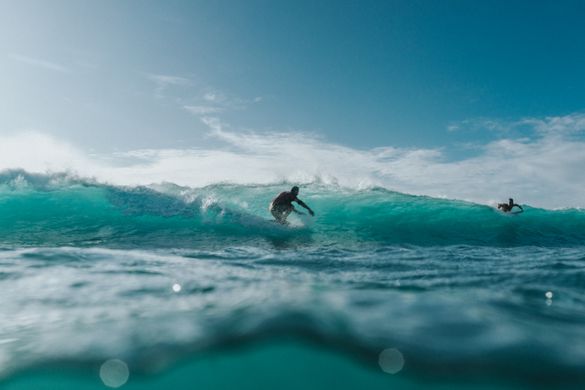 With award-winning beaches, Aruba is a top choice for sun-worshippers. But for those who want to make even more of this Dutch Caribbean island’s natural playground, there is an abundance of choice.

The island is widely recognised as a top diving and snorkeling destination but there’s plenty of action above the surface, too, and if you’ve ever fancied conquering the waves on a surfboard, Aruba is the place for you!

With steady breezes, Aruba is also recognised as one of the best wind and kite-surf destinations in the Caribbean and whether you are an experienced surfer or an out and out beginner, you can join the action.

The island boasts a number of watersports companies offering lessons for beginners and friendly locals are always happy to pass on tips. Expect to pay in the region of US$95 (approx. £73) for a two and a half hour surf board lesson (based on minimum of two people), while board rental is around $35 (£27) for a full day.

Aruba’s beaches can be roughly divided into two categories: idyllic on the island’s west side and rugged on the east side. That means you will find beaches that are perfect for those who are learning to surf as well as beaches that will challenge even the professionals. These beaches are also worth a visit for those with no interest in surfing whatsoever. The acrobatic manoeuvres of the surfers in the waves offer impressive entertainment.

Among the most popular beaches are:

Malmok Beach: The most popular beach for beginners. Here you will find several surf schools and rental facilities. The beach itself is quite narrow but the clear water is shallow for the first 60 metres offshore.

Hadicurari Beach: Also called Fisherman’s Huts, this is the surf mecca of Aruba. Every year in June or July, the prestigious Aruba Hi Winds World Challenge takes place here, the largest windsurfing competition in the Caribbean. But during the rest of the year the beach is a popular destination for water sports fans with their colourful sails and kites. The spectators on the beach also enjoy the aerial and water acrobatics of the pro surfers; some jump metres high above the waves.

Boca Grandi: On the most southern tip of Aruba’s rugged east coast, this is a great beach for experienced surfers. Swimming is not recommended because of the strong currents and high waves, but skilled surfers will have a great time here. The beautiful beach near Aruba’s second city of Saint Nicholas is worth a visit in its own right, if not as a spectator perhaps as a beachcomber – the rugged surf deposits a lot of coral, driftwood, and other small ocean treasures on the beach.

Other beaches to consider include:

Dos Playa: A pair of side-by-side coves etched out of a steep limestone bluff by powerful waves and currents.  The first cove is a favourite spot for surfing and body boarding. Generally, for experienced surfers only.

Wariruri: A sandy cove found along the windward coast of the island, where the swell size starts at between 1 and 1.5m, holding to 3m. Average to experienced surfers will enjoy the waves here.

Urirama: This cove is located on the north coast just past the Lighthouse/Dunes Beach. Also for experienced surfers.

Arashi: The sea is typically calm at Arashi, but the occasional change in weather brings in a decent swell, prompting local surfers to flock to the break just north of the main beach.  Suitable for average to experienced surfers.

Andicuri: This windward coast beach is a sandy cove flanked by two bluffs. With beach-breaking waves, it is recommended for experienced surfers.