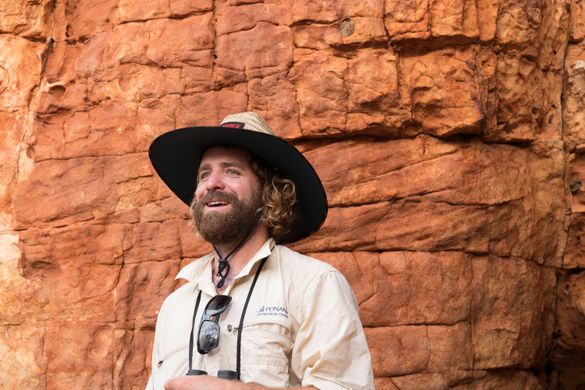 PONANT is conducting their third series of online lectures, to be broadcast on their Facebook page during July, this time focussing on unravelling some of the aspects of just what makes Australia’s own Kimberley coastal region so special.

“Building on the response to our first two series of on-line Facebook lectures, I am delighted to announce that we have a third series going to air on Facebook each Thursday during July” advises Monique Ponfoort, PONANT Vice President Asia Pacific. “I invite everyone who has a thirst to find out just what makes our own Kimberley region so outstanding, to join us. Be it to gain a better understanding of this spectacular coastline, getting a broader understanding of the Kimberley’s 300 or so bird species – some migrating annually from Asia and Siberia, – or gathering insight into the tortuous geology of the region from times when the planet was still in the throes of creation.”

“This month’s specialists feature an Expedition Leader, two outstanding Naturalists and, once again, a professional Photographer, for this is a region where you will really want insider information on how to  prepare and then capture the best images of your holiday. Please join us on our Facebook page, listen, ask questions and be stimulated.”

Stretching over 12,000 kilometres, with more than 2,500 islands, Australia’s Kimberley coast is like nowhere else on earth. One of the world’s last great wilderness areas, and one of Australia’s greatest natural assets, it is a destination that everyone should experience at least once in their lifetime. From migrating humpbacks, to Ospreys and Frigates, horizontal waterfalls, Devonian barrier reef and soaring sandstone cliffs, PONANT specialists share their knowledge of this special place.

PONANT invites you to start the journey by connecting to the weekly presentations throughout July on Facebook to learn from each specialist as they share their expertise. This series of virtual lectures is easily accessible every Thursday in July on PONANT’s EVENTS Facebook page.

Meet the Who’s Who of PONANT’s Kimberley region guest experts:

Sandrine Erwin-Rose – PONANT Expedition Leader
Sandrine Erwin-Rose is the Expedition Operations Manager for PONANT Asia Pacific. The favourite part of her role is taking guests to explore incredible destinations and providing them with unforgettable experiences. Sandrine studied Tropical Zoology, Ecology & Marine Biology, followed by an Education degree. She has always enjoyed sharing her passion for wildlife conservation and the protection of the natural environment and working at PONANT allows her to do this every day.

Dr Hannah Cowley – PONANT Naturalist
Hannah is passionate about environmental sustainability and conservation and is currently studying a Bachelor of Environmental Science. Her career has seen her work around Australia and the world with marine megafauna including humpback whales, manta rays, great white sharks, and whale sharks. On Ningaloo Reef, WA she assists on a whale shark research and tagging program. Hannah is a keen birder and enjoys sharing the excitement of sighting new and rare species with guests and her fellow naturalists.

Sebastian Jones – PONANT Naturalist
Born in Western Australia, a love for rocks and the Earth took him down the path to become an Exploration Geologist which included being in a team that discovered a major gold deposit in WA. Sebastian took up Hydrogeology and the became fascinated with ground water. Besides rocks, Sebastian loves the ocean and has sailed and surfed around the world. In his spare time, he does ocean health conservation projects and takes on citizen science adventures.

Nick Rains – Photographer – Nick Rains is a professional photographer specialising in travel and documentary work, and Leica Akademie Principal Instructor. Having been to the Kimberley on several occasions, Nick will share valuable tips on how to best capture outstanding landscape, seascape, and wildlife images. His work has been featured in publications that include Australian Geographic, Outback Magazine and Australian Photography. View examples of his work at nickrains.com

If you have been to the Kimberley and want to share your  best Kimberley shot with Nick, click here for a chance to be reviewed during his photography lectures.

The earlier 2020 lecture series on Antarctica and the Sub-Antarctic Islands are available here for catch up:

Note: When PONANT was forced to cease operations on March 15, the company deployed a plan to shelter its ships and crew members until the resumption of its operations. The small size of its vessels, the medical infrastructure and teams on board, its protocols and the professionalism of its crews ensured that there were no cases of Covid-19 contamination throughout the fleet.