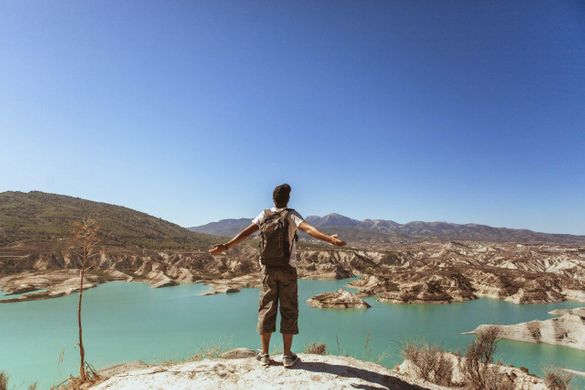 Blessed with 300 days of sunshine a year and named the Spanish capital of gastronomy, Costa Cálida – Region of Murcia is surrounded with an abundance of grand, historical attractions. The area is one of the most beautiful regions to be visited during the autumn season, offering many undiscovered charms, great cuisine and a more than favourable climate. Here are just a handful of holiday ideas from the Costa Cálida – Region of Murcia to enjoy a well-deserved autumn break.

Discover the charming old town of Murcia with a local guide

Stroll around the charming old town and discover the magnificent cathedral which represents more than six centuries of art and history. Admire the Royal Casino of Murcia, with its unique architecture which combines modernist and eclectic styles. Situated in the heart of the city centre, the Royal Casino was declared a National Historic Building in 1983 and it is now considered to be of significant cultural interest. Join Ana, a local guide on the ToursByLocals platform, who was born and raised in the Mediterranean and works together with her brother Jordi leading private guided tours around the Region of Murcia, Valencia and Alicante. The tour is fully customisable and there is free time for shopping.

ToursByLocals (www.toursbylocals.com), the world’s leading marketplace for private and customisable tours, offers the three-hour Murcia Private Walking Tour from £154 per tour, for up to ten people.

On the Tapas Trail in Cartagena

Named the Spanish Capital of Gastronomy for 2021, the Costa – Cálida Region of Murcia is the go-to place for those interested in tasty tapas at affordable prices. The historic city of Cartagena is home to a number of cultural attractions as well as an authentic gastronomic scene. Starting from the most emblematic monument in Cartagena, the Roman Theatre, guests will visit historical features of the city, passing through narrow streets and hidden corners whilst making a few pit stops to savour the best local tapas accompanied with traditional products of Cartagena.

Full package plus flights to Cartagena with EasyJet, and accommodation, starting from £539. Overlooking the Cartagena bay and only a 4-minute walk from the Roman Theatre, the NH Hotel offers the best location in the heart of the city and visitors get the best of central Cartagena plus the option of views over the bay or terraced landscape.

Planout (https://planout.es/) offers a three-and-a-half-hour tour in Cartagena (Region of Murcia), of €40 per person which includes guide, ticket to the Roman Theatre, three tapas and three drinks, insurance and taxes.

Cycle through the coast of Murcia Region unearthing tranquillity and sunshine

Explore one of Spain’s best kept secrets, the Costa Cálida – Region of Murcia, by bike. With some of the best cycling routes in the country comprising of coastal roads, winding mountains and deep valleys that lend themselves to road cycling, mountain biking and hiking in complete serenity. With relaxing views and never-ending sunshine, enjoy a scenic four-night Murcia cycling holiday, ideal for cyclists who prefer a hassle-free journey with emphasis on the peace and serenity the sport can bring. The route begins and ends in Los Alcazares on the Costa Cálida coast, gradually taking cyclists through The Portman Hills and Calblanque Regional Park. The itinerary takes guests through sweeping landscapes, over and around impressive mountains, and past the striking views of local vineyards and olive groves.

LoveVelo’s four-night Murcia Cycling Holiday is priced from £395 per person and includes accommodation in Hotel 525. The package comes with three days bike hire, airport transfer from Murcia airport, full suite of GPX experience to navigate routes and some meals. www.lovevelo.co.uk

Take some strokes off your golf swing at La Manga Club

The region of Murcia in southeastern Spain is home to 22 golf courses all within 30 miles of each other. One of the most renowned of all of these is La Manga Club, home to three high quality golf courses and once the venue for the Spanish Open. Designers have utilised the stunning natural landscape to create world-class golf courses which wind through clusters of pine trees and glide along undulating plains offering immaculate views while driving down the fairway. The resort also features luxurious accommodation and an array of facilities perfect for a long weekend spent golfing. Not to mention the over 300 days of sunshine a year which make this corner of Spain a true golfer’s paradise.

La Manga offers a three-nights, two rounds of golf package staying at the four-star La Manga Club Principe Felipe Hotel from €359 per person based on two people sharing on a B&B bases. A buggy is included with each round. Travelling in September or October 2021, subject to availability. Email reserve@lamangaclub.com and quote MUR21. https://lamangaclub.com/en

The Regional Park of Sierra Espuña and its surroundings contain Murcia’s largest extensions of forest which has become the first protected natural space of the Region of Murcia, supported by the European Charter of Sustainable Tourism, CETS, granted to protected natural spaces which have shown their commitment to sustainable tourism. The modern verdure is due in large part to reforestation efforts carried out towards the end of the 19th Century by Murcian philanthropist Ricardo Codorníu, known as the ‘Tree Apostle’, which are still continuing today. Sierra Espuña is an ideal destination for nature lovers with its mountains and valleys lending themselves to hiking and mountain biking. A challenge for active travellers is to take on either the Espubike or Esputrek trails, known collectively as ‘Espusendas’, which visitors can sign up for online and have their route stamped throughout the park. Those who take on the Espubike challenge will even be awarded an official Espubike cycling jersey to accompany them along the route and to take home as a treasured memory. Murcia’s continued conservation and restoration efforts of this beautiful natural landscape earned the region the title of ‘Headquarters for the International Day of Forests’, celebrated on 21st March 2021.