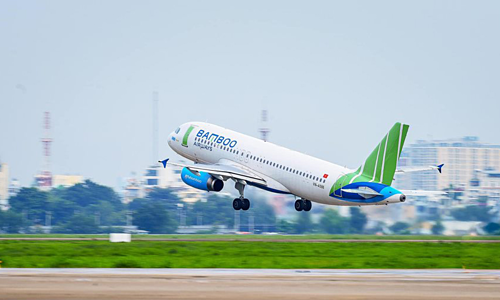 Bamboo Airways announced the launch of the first Vietnam-U.K. direct flight routes Sunday in the presence of PM Pham Minh Chinh, in the U.K. for the COP26 meet.

The airline also confirmed that local firm APG UK will be its representative in the U.K.

Bamboo Airways chairman Trinh Van Quyet said that the direct flights could commence as early as this year when the resumption of commercial flights between the two countries is allowed.

The airline said it expects to operate six round trips a week between Hanoi, Ho Chi Minh City and London; and increase frequency based on demand.

Bamboo Airways’s direct flights would help cut travel time between Vietnam and the U.K. to around 12 hours, seven hours quicker than flights that require transit.

The flights are expected to drop off and take passengers at Heathrow Airport’s Terminal 2, connecting Vietnam’s Noi Bai and Tan Son Nhat airports with the U.K.’s largest airport. The Boeing 787-9 Dreamliner will be used for flights on the Vietnam-U.K. routes, the airline said.

Nguyen Hoang Long, Vietnamese ambassador to the U.K., said opening direct flights between the two countries would boost commerce and people to people exchanges, and would be particularly beneficial for the Vietnamese community in the U.K.

APG UK, a passenger and cargo representation company, will support the airline with sales, marketing and customer support as also issues related to aviation policies and procedures.

There are currently over 100,000 Vietnamese studying and living in the U.K., and around 60 percent of them are in London. In 2019 alone, the number of tourists from the U.K. traveling to Vietnam reached 315,000, a 105 percent increase from the same period in 2018, according to the General Statistics Office. Among European countries, the U.K. has the second-highest number of visitors to Vietnam, the office added.