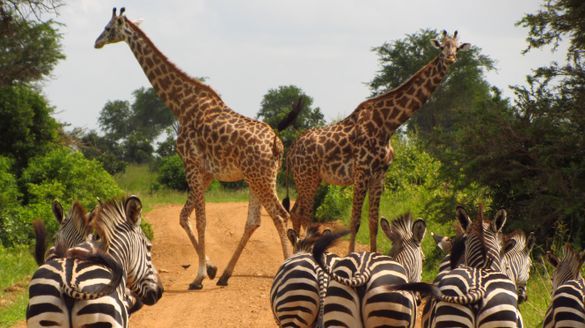 Ecuador’s birdlife is as varied as its geography and Hayes & Jarvis’ new Birding in Ecuador holiday includes many of the country’s different landscapes enabling travellers to see myriad species of bird in their natural habitats. The itinerary visits the Yanacocha reserve – known to be one of the world’s best birdwatching locations – which is home to puma, spectacled bear and the critically endangered black-breasted puffleg bird, the emblem of Quito. Avid birdwatchers can expect to see endemic birdlife including plate-billed mountain-toucan, the indigo flowerpiercer, the moss-backed tanager, the glistening-green tanager and golden-winged manakins.

Hayes & Jarvis (01293 762 456, hayesandjarvis.co.uk) has a 13-night Birding in Ecuador holiday from £5,099 per person including accommodation, international flights from London, transfers, entrance fees and meals and excursions as specified.

ANT TOURS IN THE COSTA RICAN ECO-DESTINATION OF SARAPIQUI

Hayes & Jarvis’ Mystic Jungle tour explores many of Costa Rica’s national parks, including Cahuita National Park on the Caribbean coast. Here, some of the brightest and most colourful birds in the world can be seen, including green ibises, keel-billed toucans and herons. Inland, travellers can visit Sarapiqui, a lush and green picturesque eco-town known for its biodiversity and range of nature activities. Hayes & Jarvis offers a fascinating ant tour where travellers can learn more about the life of this leaf cutting insect, as well as discover how they cultivate fungus, their caste division, functions of these important insects and surprisingly where the queen ant lives.

Hayes & Jarvis (01293 762 456, hayesandjarvis.co.uk) has a ten-night Mystic Jungle holiday from £2,499 per person including accommodation, international flights from London, transfers, entrance fees and meals and excursions as specified.

IN SEARCH OF TIGERS IN CENTRAL INDIA

According to the latest tiger census, India’s tiger population has grown by a third in the past four years and is now home to nearly 3,000 tigers. The national parks of Madhya Pradesh in central India are some of the least visited by tourists but the state has the highest tiger populations. This new tour visits four national parks including Kanha National Park, the inspiration for Rudyard Kipling’s Jungle Book and Bandhavgarh, home to over 35 kinds of mammals, 250 species of birds, 111 species of butterflies, 16 kinds of snakes and 500 types of exotic flora and fauna – the ultimate wildlife experience.

Hayes & Jarvis (01293 762 456, hayesandjarvis.co.uk) has a 14-night In Search of Tigers holiday from £3,399 per person including accommodation, international flights from London, the Agra-Katni overnight train and transfers and meals and excursions as specified.

For a tiny island, Sri Lanka is packed full of wildlife. Elephants are an important cultural symbol to Sri Lankans and thanks to conservation efforts are prevalent throughout the island. The most popular places to view elephants in the wild are Yala and Minneriya but Hayes & Jarvis recommends some quieter options to see these magnificent animals. In Gal Oya National Park, travellers can go on a boat safari to see elephants swimming between islands.  And in Udawalawe travellers can visit the Elephant Transit Home where orphaned babies are rehabilitated then released back into the jungle.

Hayes & Jarvis (01293 762 456, hayesandjarvis.co.uk) has a 7-night Wildlife of Sri Lanka holiday from £1,999 per person including accommodation, international flights from London, visits to Gal Oya, Udawalawe and Yala, transfers and meals and excursions as specified.

DISCOVER THE ISLAND OF DRAGONS IN INDONESIA

Komodo and the nearby islands of Rinca and Padar make up Komodo National Park, a UNESCO World Heritage Site and home to 5,000 Komodo dragons. The Komodo dragon is the world’s largest lizard weighing up to 90kg and three metres in length. An adult’s saliva is said to feature 50 strains of bacteria which is used to poison the blood of prey in one bite: adult Komodos are cannibals, with 10% of their diet comprising new hatchlings. All visits to the islands must be accompanied by a park ranger and Hayes & Jarvis recommends a two-night stay in Labuan Bajo as a base for visiting the national park by boat.

Hayes & Jarvis (01293 762 456, hayesandjarvis.co.uk) has a ten-night holiday to Bali from £2,199 per person, including eight nights staying at the four-star Melia Bali Indonesia and two nights on the Komodo Trails tour. The price includes internal and international flights from London, transfers, entrance fees and meals and excursions as specified.

The Bale Mountains National Park, an eight-hour drive south from Addis Ababa, is home to some of Ethiopia’s rarest wildlife including its most celebrated resident, the Ethiopian wolf. There are fewer than 500 wolves remaining in the wild and most are found on the Sanetti Plateau in the national park. Despite their rarity, the wolves are easily spotted on the plateau’s open landscape as when they are not hunting the endemic giant mole-rat in the early morning, they doze among the heather. The Bale Mountains National Park is also rated as one of Africa’s top five birding sites. Travellers also have the chance to spot the Abyssinian catbird, Abyssinian long eared owl and the white backed black tit.

Hayes & Jarvis (01293 762 456, hayesandjarvis.co.uk) has a 12-night Discover Ethiopia  holiday including two nights in Bale Mountains National Park from £6,999 per person including accommodation, international flights from London, entrance fees, transfers and meals and excursions as specified.

Selous Game Reserve, named after the great explorer Frederick Courtney Selous, is Africa’s largest game reserve and three times the size of South Africa’s Kruger National Park. At its heart, Tanzania’s largest river, the Rufiji, forms a complex network of channels, lakes and swamps creating one of the most outstanding ecological systems in East Africa. The boat trip provides an alternative view of the wildlife, observing elephants, buffalo herds, lions, leopards and prolific birdlife on the water’s edge, along with those that inhabit the river, such as hippos and crocodiles.

Hayes & Jarvis (01293 762 456, hayesandjarvis.co.uk) has a seven-night Discover Southern Tanzania holiday from £5,999 per person including accommodation, internal and international flights from London, entrance fees, transfers and meals and excursions as specified.

OBSERVE THE GORILLAS OF BWINDI IMPENETRABLE NATIONAL PARK IN UGANDA

The conservationists at Bwindi Impenetrable National Park have gone to great lengths to encourage growth in the population of gorillas and it is now a habitat for over 600 of them, more than half of the world’s remaining mountain gorilla population. This means that travellers can take a mountain gorilla trek and experience the magic of seeing these creatures up close in the wild, observing first-hand their natural behaviour in their native habitat. Although seeing gorillas is top of most travellers’ lists, Hayes & Jarvis also recommends exploring the reserves at Lake Mburo, home to rich numbers of zebra, buffalo, impala and leopard and the rare Rothchild’s giraffe, which were recently moved into the park to help regenerate population numbers.

Hayes & Jarvis (01293 762 456, hayesandjarvis.co.uk) 13-night Highlights of Uganda holiday is from £7,699 per person including accommodation, international flights from London, tracking permits, entrance fees, transfers and meals and excursions as specified.

The Ningaloo Reef is perfect for an aquatic adventure: it is one of the world’s largest and most accessible shore reefs. Every year from March to August, whale sharks – the world’s biggest fish – congregate along the Ningaloo Reef, giving travellers the opportunity to snorkel with these gentle giants. These huge but harmless filter feeders can grow up to 18m long and cruise the world’s oceans in search of concentrations of plankton to feed on. This reef is one of the only places on the planet they appear regularly in large numbers.

Hayes & Jarvis (01293 762 456, hayesandjarvis.co.uk) has an 18-night Australian Coastal Explorer holiday from £5,499 per person, including accommodation, international flights from London, car hire and excursions as specified, including a whale shark swim.

CROCODILES AND TURTLES IN THE NORTHERN TERRITORY OF AUSTRALIA

Kakadu National Park in Australia’s Northern Territory stretches for thousands of miles, encompassing lush wetlands, sandstone caves and meandering creeks. It is Australia’s largest nature reserve, averaging the size of Slovenia and is a UNESCO World Heritage site. Kakadu borders the equally beautiful Katherine National Park, famed for its dramatic gorges, tumbling waterfalls and the Katherine River. Both parks offer incredible biodiversity, allowing travellers to witness thousands of saltwater crocodiles in the rivers and billabongs, as well as endangered flatback turtles along the park’s coastline. Whilst exploring the national parks, highlights include trekking to the cascading waterfalls at Maguk Gorge or Jim Jim Falls; watching crocodiles and over a third of Australia’s native bird species on walks around Kakadu; and seeing some extraordinary ancient Aboriginal rock art.

Hayes & Jarvis (01293 762 456, hayesandjarvis.co.uk) has a 22-night Kakadu and Katherine National Parks holiday from £6,195 per person including accommodation, international flights from London, car hire, rail transfers and excursions as specified.

About Hayes & Jarvis
Hayes & Jarvis is one of the UK’s longest established tailor-made long-haul specialists, offering bespoke, experience-led journeys worldwide for more than 65 year. The Hayes & Jarvis team members are travellers at their core, dedicated to inspiring customers to see more of the world and helping them to take the journeys on their wish-lists. Hayes & Jarvis specialises in tailor making bespoke, multi-centre trips encompassing over 65 destinations around the world. Whether it’s cultural tours of discovery, wildlife encounters or castaway island-hopping holidays, Hayes & Jarvis’ Destination Specialists transform ideas into unforgettable holiday experiences. Hayes & Jarvis is part of Travelopia, the world’s largest collection of specialist travel brands officially formed in 2016 and is fully ABTA, IATA and ATOL bonded.