↓
Home→JetsettersMagazine.com→C for Cycling in Canada 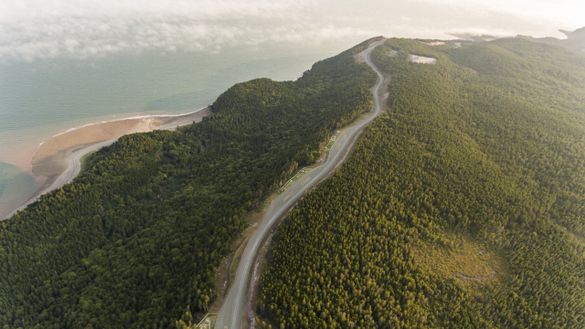 As World Bicycle Day approaches June 3rd, a round up of a few Canadian cycling ideas

Cycle across Canada
At 24,140 kilometres, Canada’s Great Trail is the longest recreational trail network in the entire world, passing through every single province and territory. Whether cycling, hiking, horseback riding, dogsledding or snowmobiling, there are plenty of highlights to see as you journey across the country. In Nova Scotia, the Celtic Shores Coast Trail is ideal for beginners, with a flat route that winds past spectacular Cape Breton Island. On Prince Edward Island, the Confederation Trail flows past farmland, seaside villages and charming cities where visitors can bird, geocache, golf and sightsee in Charlottetown, Canada’s birthplace. In Quebec, La Montérégiade winds through the Eastern Townships, a quaint collection of villages, lakes, inns, and maple and birch trees. And in Nunavut, the Itijjagiaq Trail follows a traditional Inuit route without markers, with adventurers using GPS to orient themselves; nine warming huts are positioned strategically between the expansive valleys and plateaus, providing temporary shelter. See more at thegreattrail.ca.

Vancouver, BC’s largest city, has long been one of the best biking cities in the country. Thanks to infrastructure changes that have expanded and improved cycling routes throughout the downtown core, the number of people commuting by bike has increased steadily. Cycling along the ocean-hugging seawall has emerged as one of Vancouver’s top visitor attractions, with small businesses like Cycle City Vancouver offering tours, bike rentals and self-guided maps leading visitors to the city’s most scenic locations. The city is also home to the world’s longest uninterrupted waterfront path – a perfect spot to enjoy a leisurely cycle, and the most popular recreational spot in the city.  The 28-kilometre Seaside Greenway includes the scenic Stanley Park seawall, and extends from the Vancouver Convention Centre in the heart of downtown to Spanish Banks. There’s plenty to see and do along the way, including visiting the Vancouver Aquarium, viewing a totem pole “forest”, picnicking at one of the beaches lining the path, and stopping for a cold drink on a waterside patio.

Fun fact: Canada is known for its bike-friendly cities, with Victoria and Vancouver, BC and Montreal, Quebec topping the list in a recent study.

E-bike the Canadian Rockies
Seeking an easy breezy escape to nature? White Mountain Adventures has launched guided e-bike tours in Banff, Alberta – the only operator in the region to provide the experience. Recognized as the premier guided biking experience provider in the Canadian Rockies, the company’s electric bikes boast a small motor to supplement the rider’s pedal power, expanding access for people of all ages and skill levels to cycle the mountain’s long distances and uphill sections. Several tour options are available – try the Full Bow Valley Parkway tour to bike along the scenic Bow Valley Parkway, including show-stopping views of Vermilion Lakes and a stop at the Baker Creek Resort for coffee and a sweet treat.

Cycle safely in Toronto
Launched by the City of Toronto in Toronto, Ontario ActiveTO makes it easier for residents to enjoy the outdoors with major road closures and expansion of the citywide cycling network. The temporary network aims to allow cyclists to move around Toronto safely, better connect the city, and mirror major transit routes.

Cycle the Route Verte in Quebec
Quebec’s Route Verte stretches over 5,300 kilometres – North America’s longest network of bicycle trails, and acclaimed as one of the best cycling routes in the world – and links regions within Quebec, as well as connecting Quebec with Ontario, New Brunswick and the U.S. The epitome of bike-friendly comfort and safety, the route features thoughtful facilities and clear signage throughout.

The Fundy Trail Parkway comprises more than 35 kilometres of hiking and hiking trails winding past some of Canada’s most beautiful scenery and the world’s highest tides. In addition to 20 paths leading to isolated beaches, leafy forest and a thrilling suspension bridge, there are three waterfalls and several landmarks of interest, including a burial ground for sea captains and a replica heritage building with pictures showing early settlers logging and harvesting the woods. Twice a day, visitors can witness a spectacular sight when 160 billion tonnes of seawater is pulled into the Bay of Fundy – more than four times the combined flow of all the freshwater rivers on the planet. The tides can soar up to 16 metres before retreating, leaving a large swathe of the ocean floor for guests to explore.

There’s no fresher feeling than inhaling the salty scent of the Atlantic Ocean as you cycle or hike along seemingly endless ribbons of picturesque paved trail. The 298-kilometre Cabot Trail loops around a sizeable chunk of Nova Scotia, passing through Cape Breton Highlands National Park at its highest loop and winding past glittering panoramas of the Atlantic Ocean, mountainous Acadian forest and quaint fishing villages, with the potential to see moose and bald eagles along the way. Freewheeling Adventures leads six-day guided biking tours of the Cabot Trail, with a mostly moderate route interrupted by two climbs of approximately 400 metres. (Guests who prefer a cushier ride can opt for electric bikes.) The excursion includes plenty of stops to explore local towns, whale-watch from high bluffs, swim in the ocean and dine on seasonal East Coast fare.

Readers wanting more information on Canada should head to www.explore-canada.co.uk