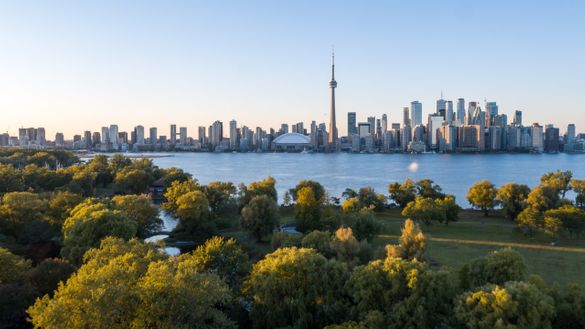 Canada’s natural assets – from towering cliffs and majestic mountains to glittering ocean and rushing waterfalls – will leave outdoor enthusiasts mesmerized. With natural wonders situated in and around Canada’s biggest cities, there’s no need to trek far to explore the wilderness.

This UN-designated day promotes sustainable   urban development around the world. Despite   its wide-open, larger-than-life landscapes,

Canada is an urban country, with the vast   majority of its population concentrated in urban   areas. Hubs such as Vancouver, Toronto and

Montreal are pioneering industries that include   biotechnology, cleantech and film.

Gardens, bluffs and birds, oh my! There’s plenty of wilderness to explore in Toronto:

A thriving metropolis with a heart of green, Montréal is marked by sprawling parkland that merges seamlessly into the downtown core:

With the Rockies to the west and the badlands to the East, Calgary is ideally situated for a holiday in Canada’s most epic outdoor playgrounds:

Venture onto the Atlantic Ocean, explore trailways, and downward dog in front of a picturesque lighthouse. In Halifax, nature is entwined with every experience:

For more media information and images  go to www.destinationcanada.com/media