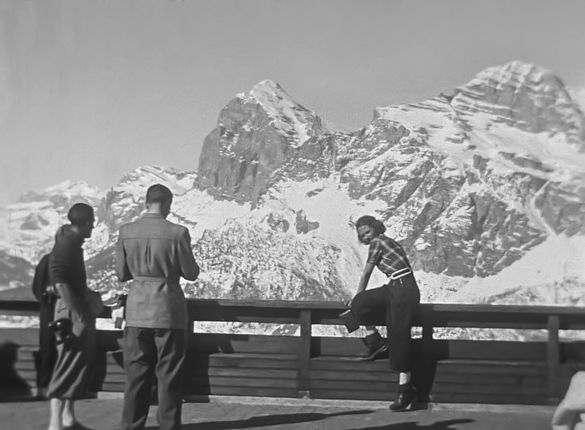 Cortina’s history as a tourism destination is at least 160 years long. In the 1860s, climbers and explorers like Viennese Paul Grohmann started making the Dolomites, and in particular Cortina d’Ampezzo, famous throughout Europe. The British, Austrian and German nobility and high bourgeoisie began flocking to Cortina for their summer holidays, attracted by the beauty of the landscape, the numerous adventure options and the positive effects of fresh air and a pristine environment on their health.

This first golden age of tourism was not to last forever: when the First World War broke out, Cortina d’Ampezzo found itself on the frontline, and when the peace was signed it was passed from Austria to Italy. Europe was not the same as before, the Belle Époque had gone for good and the tough war years had reshaped the interests and values of a poorer population. Nevertheless, the taste for beauty and adventure did not fade. Tourists gradually returned to Cortina, the Italian high society replacing fallen royal families. The 1930s saw the boom of winter tourism, Cortina’s success was unrivalled, with 52 hotels hosting over 600,000 overnight stays in 1937, and the town was appointed to host the Winter Olympic Games in 1944.

A few years later, the flourishing tourism economy of Cortina was once again disrupted by war. The town was still able to host the World Ski Championships in 1941, but the 1944 Olympics were cancelled. When the war stopped, the social and economic situation in Europe was catastrophic, and yet tourism in Cortina slowly recovered. In the 1950s, the Italian economic miracle marked the growth of a wealthy middle class, and tourism stopped being an activity only for the ultra-rich. Cortina was fast in reacting, as only two years after the war the destination bid for the 1956 Winter Olympic. This enhanced the phase of renaissance already taking place and gave residents the necessary motivation to keep working and renovating the town. The Games marked Cortina’s definite comeback on the international scene and gave it a special place in the hearts and minds of Italians as a dream mountain destination.

Ever since, Cortina’s image and tourism sector have reshaped a number of times: from the party town of the 1980s to the place of Italy’s jet-set in the early 2000, to a shift back to sports, nature and wellbeing after the crisis of 2009.

In more than one century, mountain tourism transformed from its very foundations, from a summer-only activity for the élites to a mass phenomenon filling up the slopes at the weekend. In an ever-changing environment, throughout two World Wars, the internet revolution, a change of nation and huge social transformations, Cortina has always found a successful way to transform and recover. The golden thread linking these events has been that tough times are able to bring a destination closer together, creating new partnerships, more exchange and greater cooperation among its stakeholders.

Many things may change, but humankind will always be attracted to nature, to beauty, wellbeing and the places that embody those values and are able to reinvent themselves.