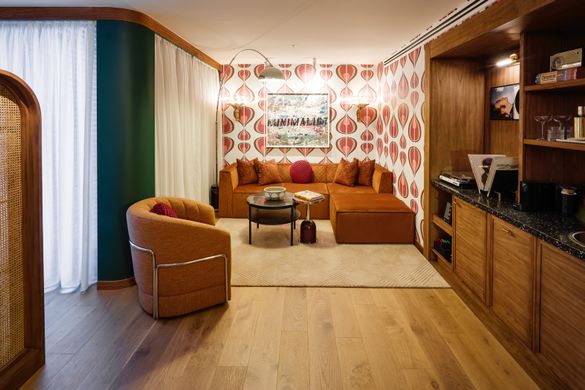 Ovolo Hotels has unveiled the next addition to their designer hotel collection, Ovolo South Yarra, in Melbourne. Located next to the famed intersection of Toorak Road and Chapel Street in Melbourne’s cultural precinct, blending past, present and progressive, Ovolo South Yarra is a place where retro chic and pop art meet.

Taking design cues from the days of disco, rock gods and retro glamour, Ovolo South Yarra is bold, creative, and unpredictable. Designed with long-term collaborators of Ovolo, award-winning designer Luchetti Krelle, all 123 rooms infuse retro-plush, with accents of chrome and colour. Ranging from micro-hotel rooms to Rockstar suites, completing the hotel in true Ovolo fashion. Each with a musical moniker, aptly named in honour of the era’s most iconic lyrical lovers, ‘John’, ‘Yoko’, ‘Sonny’ and ‘Cher’.

Effortlessly designed, the rooms and suites offer an injection of energy and are anything but dull. Seamless technology integration with Chromecast, Bose Bluetooth speakers (excluding Go Go rooms) and intuitive design is met with custom bold graphic wallpapers that jump off the walls. While chrome makes a comeback in feature joinery pieces in harmony with plush pattern-heavy furnishings. In addition, Ovolo South Yarra’s rooms feature a convenient water dispenser, hydrating guests while reducing plastic waste.

“South Yarra – the cosmopolitan corner of Melbourne – has always had a rep for setting trends as a cultural hub of food, art and fashion. It’s the ultimate place for stepping out in style and living life as it should be,” says Rachel Luchetti, Co-Founder of Luchetti Krelle.

Ovolo South Yarra is a heady mix of ‘mod’ and retrofuturism. The later sees themes of tension between past and future and the nostalgia of those eras are explored and appropriated with modern art installations and collaborations with local and international artists integrated throughout the property. Featuring the works of Mr Brainwash, Punk Me Tender, Ben Tankardand and the renowned Jisbar to be one of the largest private art collections in an Australian Hotel.

At every turn of the Lobby there is an element of surprise and delight, discovering a time of discos, rock gods and retro glamour. On entry, pop art collides with retro elements through raw brutalism and monolithic forms. Centred around a neon fireplace with bright orange flue and a domineering concrete reception desk worth the weight of two elephants (6 tonnes) akin to a futuristic airport check-in.

A vast internal lightwell serves as the heartbeat of Ovolo South Yarra. The largest in Australia, created in partnership with FPOV lighting and audio-visual designers, to showcase Ovolo’s love of art and design. Influenced by Luchetti Krelle’s retro pattern making throughout the hotel’s interiors, inspired by the golden era of 8-bit arcade games from a simpler bygone lower resolution world.

“The work is made of a laser cut metal screen which is pinned off the wall which has colour changing lighting nodes concealed behind it. When all working together the nodes form a very low-res video screen, amongst other things, takes us back to the early days of arcade games and draws on the detailed interiors of the hotel,” explains Bernie Tan-Hayes, CEO APAC and Head of AV and Technology of FPOV.

A basement level within Ovolo South Yarra offers numerous communal spaces to work, host small to large meetings or simply relax and play pool. There are three meetings spaces which take on a rich glam rock subterranean aesthetic allowing for a flexible yet edgy event space for those looking for something different than the usual hotel event space. From corporate functions to Yoga to movie nights. Beyond these hideouts is a free-flowing flexible gallery come pre-function hangout with endless possibilities.

Anna Roberts, one of Australia’s most formidable and leading interior stylists, has brought the theme and design narrative of the hotel to life. Styling the public spaces with art pieces, artifacts and curiosities that further enhance the guest’s visual experience.

Additionally, alongside Ovolo’s own Radio Ovolo, Music Curator Andrew Lewis has further heightened the auditory experience. Curating a juxtaposed score, offering chic-disco vibe within public spaces whilst the restaurant and bar leans towards a Latin feel.

With decades of experience in European fine and bistro dining, Curley along with plant-based chef and author Martinez have curated produce led vegan/plant-based menus with vegetarian options, paying homage to her Latin roots. A rebellious renaissance from root to stem, sustainably crafted to be shareable, seasonal and flavourful.

To celebrate Ovolo’s latest launch, from April 9 the first 500 bookings will see the revival of retro rates, starting from $99 per night, inclusive of Ovolo’s signature The Perks – breakfast, mini-bar, WiFi, social hour plus more.

These flash-back prices are valid for 7 days only and are strictly limited to the first 500 reservations.

It is anything but under-the-radar, book now at ovolohotels.com

The Ovolo Group was founded by entrepreneur Girish Jhunjhnuwala and first entered the real estate market in 2002; then further expanded into the hotel industry in 2010. Ovolo Hotels quickly became one of Hong Kong and Australia’s most dynamic independent owner operated hospitality firms by providing guests with the best in effortless living across hotels and food and beverage outlets.

The Ovolo Group is a collection of contemporary hotels that keep you connected to the little luxuries you love, all effortlessly included. The company prides itself on being in touch with the modern traveller through award-winning interior designs, detail-driven comforts, complimentary value-added services like the mini bar and breakfast, with cutting-edge technology. Ovolo Hotels have been acknowledged for Hotel and Accommodation Excellence, receiving the accolade “Hotel Brand of the Year”, at the 2019 and 2020 HM Awards.

Ovolo also has the By Ovolo Collective within its portfolio of hotels, a distinctive collection of four hotels each one unique, each one special, the more guests explore, the more they’ll find. These include Nishi Apartments in Canberra Australia, The Sheung Wan by Ovolo in Hong Kong, and Mamaka Kuta Beach in Bali Indonesia.

As of March 2021, Dash Living collaborated with Ovolo Hotels to launch two new generation of serviced rental solutions in Hong Kong. A total of 135 rooms and suites that form part of a new generation of serviced rental solutions for hyper-mobile millennials will be available for booking. The Aberdeen by Dash Living, soon-to-be converted from Mojo Nomad By Ovolo, offers 79 rooms ranging from studios to executive suites. The 56-room The Sheung Wan By Ovolo, onl

y remaining under Ovolo’s management for stays under 7 days, will offer units from studio, one bedroom, to family room options.