↓
Home→JetsettersMagazine.com→Escape the Heat of Summ Treats en Route the Tobu Railway in NZ 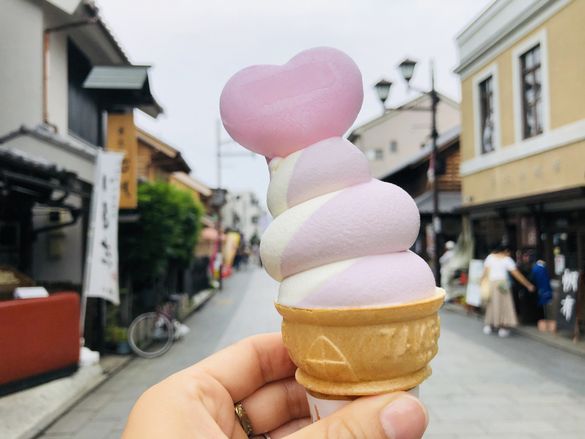 Australians love Japanese food – so much so that it stands as one of the top motivators to visit Japan. With summer at its peak here down under, be inspired and start compiling a list of the foods you MUST try on your next culinary adventure to the land of the rising sun.

Offering affordable and convenient transportation to destinations in Tokyo and to prefectures north, a journey of decadent summer sweets awaits along the tracks of the Tobu Railway.

Asakusa is one of the most popular spots for first time and repeat visitors to Tokyo, whether it be to see the famous Sensoji Temple, wear a kimono and do some souvenir shopping or relax at one of the back alley izakaya bars. Travellers can also stretch their legs by walking the banks of the Sumida River and enjoy riverside attractions such as the newly opened shopping complex TOKYO mizumachi and bask in the view of the city’s most iconic landmark – TOKYO SKYTREE .

Asakusa is also home to an array of traditional sweets – one of them is Suzukien, famed for selling the ‘richest’ matcha flavoured ice cream in the world. Originally a teahouse when it opened 150 years ago, this historic store continues to sell a variety of tea and tea making accessories alongside their ice cream and sweets. Suzukien’s matcha ice cream is made in collaboration with Nanaya, a matcha sweets company from Shizuoka Prefecture, one of Japan’s iconic areas for the production of green tea. There are 7 different intensities of matcha ice cream – with an obvious difference in flavour marked by the signature green colour. The richest flavour has a deep, refined flavour boasting the sophisticated taste of high-quality green tea. Those who prefer something more mild should stay in the mid-range – or even splurge with two scoops of contrasting intensity.

Walk for 8 minutes from Asakusa station and find Suzukien behind Sensoji Temple.

Venture to a historic town with an unexpected local legend

North of Tokyo in Saitama Prefecture you can find Kawagoe – a small town overflowing with traditional Japanese charm. Known locally as ‘Ko-Edo’ (little Edo), here time seems to have stopped in the feudal Edo Era (1603-1867) – the period of Samurai. The town has countless heritage buildings, seasonal activities and traditional shops for visitors to enjoy as a day trip from Tokyo.

Kawagoe\\ is also famous for an unexpected ingredient – sweet potatoes! In the Edo era, sweet potatoes were a common snack, and many local farms still produce high amounts to this day, resulting in the branding of ‘Kawagoe potatoes’. They can be found in a variety of forms all over Kawagoe – from simple roasted sweet potatoes, sweet potato noodles, to Kaiseki course meals, sweet potato sweets and even a sweet potato beer. After enjoying the town, tame your sweet tooth with one of Kawagoe’s most loved sweets at dessert shop Kashou Umon. They are known for their purple sweet potato ice cream that comes topped with a heart shaped, crispy monaka pastry filled with sweet red bean paste.

Utilize the Tobu Railways Kawagoe Pass to get to Kawagoe on the Tobu Tojo Line in just 30 minutes from Ikebukuro Station in Tokyo.

Further north from Tokyo in Tochigi Prefecture, you can find the small town of Nikko, sitting on the edge of a giant National Park. The area is known for a surplus of natural hot springs and lush nature, as well as housing some of Japan’s most historically significant temples and shrines. Another unique factor about Nikko is their ice purveyors who continue to use traditional methods that remain unchanged for centuries. During the peak of winter, they collect the frozen high quality spring water which flows from the Nikko mountain range and store for use in the summertime.

There are various establishments in Nikko which sell the natural ice served as ‘kakigōri’ – a traditional Japanese summer favourite. With a history dating back hundreds of years, traditional kakigōri is shaved so thin and fluffy that it is like fresh fallen snow and is completed with flavoured syrups and other toppings. Although this dessert can be found all over the country, not many places offer kakigōri made with natural ice like Nikko does. The café located inside the Nikko Kanaya Hotel offers shaved ice served with special syrup made from local speciality – ‘tochiotome’ strawberries. Another local legend – Shogetsu Himuro has a wide selection of sweets including kakigōri topped with locally grown fruits.

Nikko is a 2-hour express train ride on the Tobu Railway from Asakusa station in Tokyo. The Tobu Railway offer the Nikko Pass ALL AREA – a special pass for foreign travellers visiting Nikko which includes a round trip from Asakusa to Nikko, as well as unlimited travel on trains and busses in the Nikko area.

The Tobu Railway Co., Ltd. is one of Japan’s largest commuter railway networks which operates in Tokyo as well as in large portions of the surrounding prefectures of Chiba, Saitama, Gunma, and Tochigi. It opened in 1899 and was the first railway in the Kanto region to adopt the use of quadruple tracks, and to this day is Kanto’s largest private railway. Tobu Railways is part of the Tobu Group, which is engaged in other transportation sectors such as bus and taxis, they also operate Department stores, Hotels, health clubs, golf courses and theme parks, as real-estate. They are the largest investor in the TOKYO SKYTREE – the tallest structure in Japan, which is the centrepiece of the large commercial development.