↓
Home→EUROPE→Germany→Experience palaces and castles in Germany 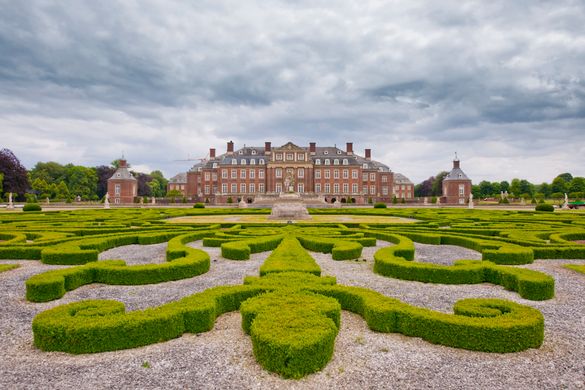 All over North Rhine-Westphalia, grand palaces and imposing castles have exciting tales to tell from different eras. Many of the palaces and castles are great places to visit for a weekend day trip, with their English landscaped gardens, baroque parks, museums and art exhibitions.

The palaces in Brühl in the Rhine-Erft district are considered to be the first outstanding rococo buildings in Germany, and were the model for a large number of homes for the German aristocracy. The Grand Staircase designed by Balthasar Neumann stands out in particular. You can take a virtual tour of the palaces here: www.dein-nrw.de/panoramas/bruehl_1_2_0s_VR/bruehl.html

The castle in Altena in the Sauerland region is the first and oldest youth hostel in the world. It is idyllically situated above the valley of the small Lenne river. If you don’t feel like hiking up to the castle, you can simply make the ascent in a modern lift that allows visitors to experience the castle’s history. Six stops in a time tunnel display the castle’s 900-year history. www.burg-altena.de

In this palace in Weeze on the Lower Rhine, which is still owned by an aristocratic family, there are six very special hotel rooms. One of these is the “Star room”, a loft-style suite in a former garage, with skylights that guests can open and sleep under the stars. Tours of the palace are also offered, which are usually given by the owner himself. www.hertefeld.com

Schloss Burg in Solingen is the largest restored castle complex in western Germany. The castle is particularly famous for festivities and markets of all kinds, but also for its ceremonial hall and the ways that visitors can choose to approach it. The castle can be reached on foot through idyllic forests or by a chairlift that has been bringing people up the hill since the 1950s. www.schlossburg.de

Halfway up the world-famous Drachenfels (“Dragon’s Rock”) hill in the Siebengebirge hills near Bonn, you’ll find Schloss Drachenburg. There are many strange stories surrounding this impressive castle complex, which are retold in an entertaining way during a guided tour. The stories are worth hearing, while the journey up by cog railway or a night in a small holiday apartment with a bay window room looking out over the landscape below are also recommended.
www.schloss-drachenburg.de

Schloss Hugenpoet in Essen in the Ruhr region is surrounded by moats and is located not far from the nature conservation area around the Ruhr water meadows. This 17th century moated castle now houses a first-class hotel

with a gourmet restaurant and top-quality chef. www.hugenpoet.de

Visitors can walk for hours through the park grounds of Schloss Dyck and admire the wide variety of gardens there. It’s no coincidence that the palace is an international centre for garden design. Children play in the water playground or in the climbing park, while a café under mature trees is a good place to stop for a rest. Guests can now stay overnight in nine hotel rooms in a restored carriage house. www.stiftung-schloss-dyck.de

Schloss Nordkirchen in the Münsterland region is also known as the “Westphalian Versailles”. On the one hand, this is due to the impressive size of the palace, but also to the park, which has been designated the most beautiful gardens in Europe. In one of the most beautiful gardens in Europe, visitors can take a stroll all year round, and discover the special garden designs here. www.schloss.nordkirchen.net

The former Benedictine monastery of Corvey near Höxter and the westwork from the 9th century are the most recent addition to the list of UNESCO World Cultural Heritage Sites in North Rhine-Westphalia. The Monastery-Garden Route passes the impressive complex, where visitors can discover the medieval attractions and monastery gardens by bike, in Corvey as well as in other secretive places.

Palaces and castles follow on one from the other along the Wasserburgen-Route (“water castles route”) between the three cities of Aachen, Cologne and Bonn, and make it a popular destination for cyclists.

Along the overall length of 380 kilometres, most of which only has low ascents, the network of cycle paths extends from the Eifel to the Rhineland where the nobility once built huge castles and palaces. www.die-wasserburgen-route.de

If you can’t get enough of palaces and castles, the 1,000 kilometre-long, 100-Schlösser-Route (“100 Palaces Route”) in the Münsterland region has a hundred stately homes and noble houses waiting to be discovered. Some sections of this queen of cycle paths are best explored by bike or e-bike, although it’s also worth taking a detour on foot or by car from one palace to the next. www.muensterland-tourismus.de/5116/100-schloesser-route-radtour