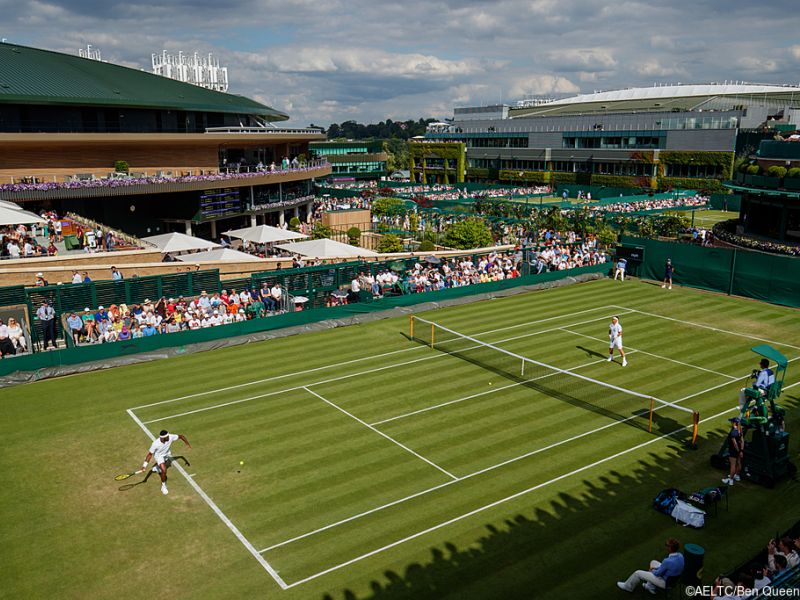 Although Wimbledon’s hallowed green turf won’t be seeing any jaw-dropping serves, volleys or backhands this summer, the heritage and tradition of The Championships continues to be appreciated worldwide. From indulging in traditional strawberries and cream to discovering tennis-inspired fashion, or simply re-watching past show-stopping matches, there are still plenty of ways to enjoy a taste of Wimbledon – the world’s oldest and most prestigious tennis tournament.

The very first lawn tennis championship was held in 1877 at The All England Croquet Club, off Worple Road in Wimbledon, south-west London. This exciting event saw a men’s only Grand Slam played by 22 amateurs, which ended in a thrilling finale watched by around 200 spectators. Won by local sportsman Spencer Gore, he proudly received twelve Guineas prize money (equivalent to circa £790 of purchasing power today). Ladies’ Singles and Gentlemen’s Doubles competitions were added to the mix in 1884, with Ladies’ Doubles and Mixed Doubles introduced in 1913. Such was its growth, that 1922 saw the Championships move location to a bigger venue on Church Road, in the same area of south-west London, where it remains to this day.

The courts of Wimbledon have changed a lot since their move, with one weather-proof addition saving the British event a lot of time – since 2009, Wimbledon’s centre court has not succumbed to rain delays thanks to a retractable roof. Able to cover the green turf in just ten minutes, the improvements also included a state-of-the-art air conditioning system that acclimatises the stadium. The first full match to be played under a closed roof was the clash between Scottish legend Andy Murray and Switzerland’s Stanislas Wawrinka, the year it was installed.

Before Wimbledon’s Grand Slams rose to fame, tennis was predominantly enjoyed by the British upper classes and royals. England’s oldest surviving example of a tennis court dates back to the 16th century and can be found nestled in the grounds of the historic Hampton Court Palace. A favourite game of King Henry VIII, ‘royal tennis’ was a sport loved by some of the highest nobles and richest people in the land.

Lawn tennis, which differs from ‘royal tennis’ and requires less space, was first played in 1873 by Major Walter Wingfield. Created as a game to be enjoyed outside, it was usually played on the greens of large manor houses belonging to the British elite.

Today, matches at Wimbledon attract fans from all around the world and are watched in over 200 countries. Although the tournament boasts 18 grass courts, some of the most nail-biting point scoring and exciting relays are often seen on Centre Court; a 15,000-seat stadium that is considered the most iconic tennis court in the world. The calibre of guests who nab the coveted Centre Court seats is high too; with the Royal Box reserved purely for the use of the royal family and their guests.

Celebrity spotting at the Centre Court adds another level of excitement to Wimbledon, with David Beckham, Claire Foy of The Crown and Dame Maggie Smith among those spotted in previous years, alongside royals such as Kate Middleton and Meghan Markle.

Alongside the designer dresses and linen suit jackets regularly seen in the stands, the outfits worn by the competitors adhere to a simple rule, they are all white from head-to-toe. These rules have been at play at Wimbledon since the very beginning, dating back to the 1800s where tennis would be played in certain social gatherings and players wore ‘tennis whites’ to stop embarrassing sweat patches emerging! With the exception of a one centimetre ‘trim’ of colour, today it remains the case that players must wear a completely white outfit – even down to their pants and the soles of their shoes!

The courts of Wimbledon have also influenced fashion directly through three-time champion, Fred Perry. This great British brand’s logo is the laurel wreath, inspired by Wimbledon’s emblem – a patch which is sewn onto the front of each iconic Fred Perry polo shirt. Launched at the 1952 Wimbledon championships, the white tennis shirt shot to style success, leading to the creation of a more colourful collection that became a fashion statement for numerous British subcultures during the 1960s and beyond.

A number of British players have tasted success at the prestigious tournament, including Fred Perry himself, who won three consecutive Wimbledon Championships in the 1930s. Dorothy Round Little was a winner just the year after Perry, while Angele Mortimer took the trophy in 1961, followed by Ann Haydon-Jones in 1969. In 1977, the tournament’s centenary year, Virginia Wade walked away a winner, having been watched by Her Royal Highness the Queen, who had not attended a final since 1962.

The most recent British win came in 2013, when Scottish talent Andy Murray became the first British male to take the trophy in 77 years. Meanwhile Swiss tennis star Roger Federer has won the Wimbledon title the most, enjoying success on a jaw-dropping eight occasions to date.

Andy Murray’s success has been honoured by the unofficial renaming of the grassy area around Wimbledon’s No. 1 Court, now affectionately known as ‘Murray Mound’. Previously called ‘Henman Hill’ after the well-loved British player Tim Henman, it is known for being a top spot for spectators, as excited crowds gather to watch the matches on giant screens while tucking into traditional Wimbledon treats.

A taste of Wimbledon comes in a simple yet delicious serving of fresh strawberries and cream, washed down with some refreshing Pimms (with a selection of fruit, fresh mint and lemonade for good measure) or a glass of fizz! Strawberries and cream is the quintessential Wimbledon staple, with around 140,000 portions usually gobbled up across the two-week event. This tournament takes great pride in providing the highest quality Kent-grown strawberries which are picked the day before and arrive with the birdsong at 5am the next day!

Want to relive the thrill of Wimbledon and dream of tournaments to come? Why not dive into this gripping fourth round replay, of Andy Murray versus Richard Gasquet, shared by Wimbledon.