Located directly on the Pacific Ocean and surrounded by mountains, at the end of Route 66, Santa Monica enjoys an average of 310 days of sunshine each year. With average temperatures in the mid to upper seventies year-round, this beachside city’s weather is one of its most attractive assets and being outdoors is a part of the city’s lifestyle.

But there is more to discover in Santa Monica than great weather, and visitors to the Los Angeles area miss out if they don’t spend a bit of time in this eclectic community.

Many of the attractions that make the beach-front city special have found residence in our collective conscience, and you may find yourself surprised at your osmotic familiarity with some of the key points of interest in Santa Monica. 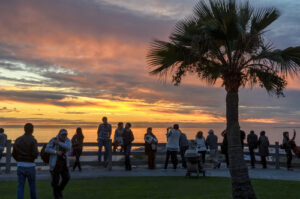 The 26 acres that make up the park are encompassed in a thin 1.6-mile section of Ocean Avenue from which you can see not only the ocean but the mountains surrounding the city as well. The park’s boundaries stretch from the Santa Monica Pier at its southern tip and run north to Adelaide Drive. Palisades Park includes terrific public art and a rose garden, picnic areas, and more than 30 species of plants and trees. The park is a favorite spot to engage in people-watching, with a continual presence of joggers and strollers taking advantage of the air and the scenery. 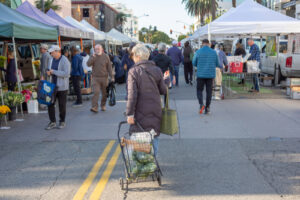 One of the largest and highest-rated Farmer’ Markets in the entire country, the Santa Monica Famers’ Market consists of several different venues that pop up on different days of the week. The produce is primarily locally grown and consist of fresh fruit, vegetables, nuts, dairy, a variety of meats and fish, as well as flowers and processed farm products like jams, juices, pickles, and salsa. 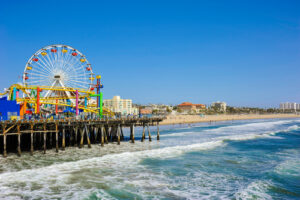 Running the length of Santa Monica itself, Santa Monica State Beach is, as you might expect, one of the most popular local divertissements and is well attended by the local population. The world-renowned Santa Monica Pier is the beach’s man-made focal point and is home to a plethora of attractions and recognizable landmarks like the Santa Monica Ferris Wheel, which happens to be the only solar-powered Ferris Wheel in the world. The Pier has been the setting for scenes in many movies and television shows, from an early Charlie Chaplin film in 1914, as well as Forrest Gump and Iron Man, among many others. The Heal the Bay Aquarium is underneath the Pier, as well as a vast array of arcade games, carnival rides, and food booths at the Pier’s Pacific Park. 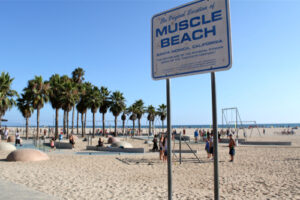 Extroverted Muscle Beach Venice has an older relative. Santa Monica’s exercise jungle gym for adults is the Original Muscle Beach stretching back to the 1930s. A Works Progress Administration (WPA) project installed exercise equipment in a city park, and it quickly caught on with those willing to sport their physical, gymnastic, and acrobatic prowess on the swings, parallel bars, and other fitness apparatus available to the public. 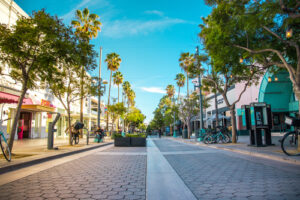 Shopping in Santa Monica is way too easily accomplished, and the variety is huge, from unique boutiques to familiar chain stores. The two most prominent shopping areas are Santa Monica Place and Third Street Promenade. Santa Monica Place has many high-end retailers as well as dozens of dining and wine shops. Third Street Promenade is the most popular shopping venue with easy access to restaurants and the Wednesday Farmers’ Market. Street performers provide plenty of impromptu entertainment and a pedestrian-friendly experience at this open-air shopping setting.

There are many excellent hotels  and be sure to take advantage of other outdoor opportunities like bike rides, Tongva Park, and the Santa Monica Mountains National Recreation Area.