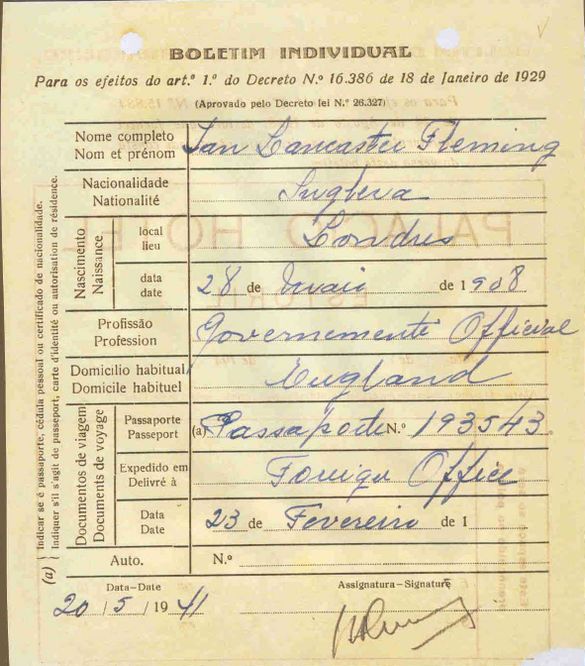 The region hosted many European personalities, several royal families, and charismatic artists, running away from an Europe at war in search of a safe place. The concentration of such important people forced the belligerent countries to send their secret agents here.

Portuguese hospitality has soon seduced many of these early visitors to stay here until the end of their days.

As Josef von Habsburg of the Austrian Royal House said “We feel at home here.”

The necessary ingredients of magic and mystery were created, giving the Portuguese Riviera a unique atmosphere that still prevails.

It was not by chance that Ian Fleming created his famous character – the secret agent 007 James Bond – in 1941, shortly after his last stay in this region.
James Bond is quite possibly the most charismatic character of the seventh art. Up to a total of six actors have played Agent 007, who wraps himself in an atmosphere of glamor and luxury.

The region also served as backdrop of the James Bond movie from 1969 “On Your Majesty’s Secret Service” that is often considered one of the film series’s most faithful adaptations of an Ian Fleming novel.

It is important to understand the environment where Ian Fleming portrayed the double agent Dusan Popov, who liked to relate with the bourgeoisie of the time and who lived an endless number of hilarious adventures in the village of Estoril during the World War II:

Palacio Estoril Hotel – It’s also known as the ‘whispering hotel’, due to the English and German accommodation during World War II. Built in 1930, the Palácio is one of the most sophisticated and luxurious complexes in Estoril, with elegant and classic decoration and personalized attention. In addition, its wonderful garden – combined with a fantastic spa – is a haven of relaxation. In addition, since its foundation the Hotel Palácio has been not only the second residence of the Spanish, Italian, French, Bulgarian and Romanian royal families (is still the place chosen by their descendants), but also a choice for the millionaire Charles Guggenheim, the French writer Antoine de Saint-Exupéry, the British writer and spy Ian Fleming, the future Prime Minister of India Indira Nehru or the economist John Keynes, among many others. Further info: http://www.palacioestorilhotel.com/

English Bar, Restaurant Cimas – It’s the place where English spies used to meet and that Dusan Popov and Ian Fleming used to frequent. Its location is reminiscent of Agent 007’s 1950s films: narrow, with a cobbled street and a poster from the era that reads ‘English Bar’. Currently, it is the Cimas Restaurant, one of the most renowned in Portugal and Cascais, whose dining room offers some fantastic views of the sea. Further info: http://www.cimas.com.pt/home.html

Estoril Casino – This casino inspired agent 007’s first novel and film ‘Casino Royale’. It is the largest casino in Europe and the largest gaming and leisure complex in Portugal. It was also one of the scenarios in the filming of the movie ‘007: On Her Majesty’s Secret Service’, which starred Australian actor George Lazenby after the seasonal departure of Sean Connery. In this casino, agent Dusan Popov used to play Black Jack and it is rumored that one day he ruined the German spies. Ian Fleming himself, eager to repeat the feat, asked the English intelligence service for money to emulate Popov at the table. It’s a place where dreams can come true. Further info: http://www.casino-estoril.pt/en/

Cascais Promenade – The Promenade of Cascais is also one of the key points, where the encounters and disagreements between the spies of both sides happened. The oldest people of the place tell that the fights were continuous. Now it has become a calm and relaxing enclave, embraced by the sea breeze, which allows to discover the beauty of Cascais beaches.

Guincho Beach – This is one of the longest beaches in the region. It has some of the best restaurants in the country, such as Fortaleza do Guincho – awarded with a Michelin star – and the Porto de Santa María, which has attracted celebrities as the USA president Bill Clinton.
Guincho beach and the Hotel Palácio were two of the scenarios that appear in the James Bond movie ‘007: On Her Majesty’s Secret Service’ (1969), in which the secret agent is played by the australian actor George Lazenby.
‘On Her Majesty’s Secret Service’, James Bond is overcome by a woman in a Mercury Cougar car. At the Guincho beach, the agent prevents this same woman from committing suicide.

Casa de Santa Maria – Casa de Santa Maria is one of the city council museums of Cascais. During the period of WW II, this house was owned by the portuguese Espírito Santo family, who there received the Grand Duchess Carlota of Luxembourg and her family, the Counts of Barcelona, King Umberto II of Italy and the Dukes of Windsor. Further info: https://www.visitcascais.com/en/resource/casa-de-santa-maria