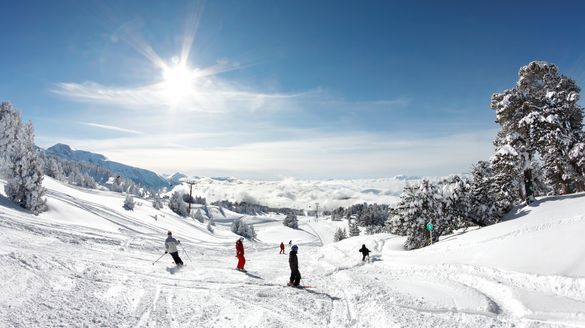 France Montagnes was proud to launch its forthcoming winter season on 30 September 2021, alongside 17 partners. The event introduced 36 skiing, travel and lifestyle journalists to the latest news from the French ski industry and new developments in France’s mountain resorts.

Following the DSF (Domaines Skiables de France) Congress held in Chambéry on 30 September, the situation regarding the forthcoming ski season appears encouraging. Secretary of State for Tourism, Jean-Baptiste Lemoyne, verbally indicated that the pass sanitaire (health pass) would not be required to access resorts and lifts, although he suggested that it could be reinstated at any time if the health situation declined. We are awaiting the official statement. For useful guides regarding travel from the UK to France, including information on the travel rule changes from 1 October and the pass sanitaire, please consult the French Embassy’s website here.

The coming winter will bring a brand new helping of snow, holidays and fun for ski and mountain enthusiasts, with many new experiences and activities on offer. Step into the void at over 2,000m on a new glass walkway in Morzine’s Pas de l’Aigle, whizz along a giant zip line in Serre-Chevalier, and try splitboarding in the Haute-Maurienne: split your board into two large touring skis on the way up, and snap them back together for the run down.

These are accompanied by a number of exciting new resort developments. In Saint-Gervais-Mont-Blanc, €1.5 million has been invested into a dedicated, high-altitude beginners’ skiing area in the Mont d’Arbois area. At the resort’s thermal spa, a five-day post-lockdown programme promises to restore respiratory health, alongside a series of post-Covid supervised medical treatments. Cheese fans will love the new Reblochon slope in La Clusaz, where you can learn about the famous mountain fromage during the 2.5km descent. In Les Arcs, non-skiers can enjoy a new pedestrian pass with its complimentary access to activities and experiences within the ski area.

Among the new ski lifts open for the forthcoming season, worthy of note are the Eau d’Olle Express linking Oz-en-Oisans with the Alpe d’Huez ski area, and a 10-seater panoramic gondola ascending to the Cime Caron summit, bridging the gap between Orelle and Val Thorens. Also this year, the ESF French Ski School is back with two initiatives: Team Étoiles to introduce kids to freeriding, freestyle and competition skiing, and Neiges & Montagne to enhance off-the-beaten-track ski touring experiences.

Some of the French mountains’ top hotel openings include the four-star Marielle Hotel in Val Thorens, whose name is a nod to international ski champion Marielle Goitschel; the luxury Bear Lodge in Arc 1950; a four-tridents Club Med residence in La Rosiere; and two new trendy hostels: Base Camp Lodge in Les Deux Alpes and Tignes’ first hostel, The Hideout.

Eco-friendly accommodation is making steady advances in the form of the new Charlemagne ecogite in the Haute-Maurienne-Vanoise, with its impressive list of sustainable materials and facilities, surrounded by wildlife to allow true immersion in nature. Les Contamines-Montjoie has opened its first winter refuge in France’s highest-altitude nature reserve, while in Arêches-Beaufort, guests can spend the night in a cosy igloo, complete with campfire and mountain guide. France’s ski domaines are still committed to their goal of achieving zero carbon emissions by 2037.

French mountain restaurants are also going from strength to strength. Chef Sylvestre Wahid has returned to Courchevel, where he earned two Michelin stars in 2012, to open an intimate restaurant in the Les Grandes Alpes Hotel. Homage is paid to Leonardo da Vinci at new restaurant Cucùcina by Val d’Isere’s La Folie Douce, while diners can soak up the sumptuous views of Lac de Serre-Ponçon and the Ecrins mountains from Le Pic Vert (2,230m) in Les Orres.

As we move into 2022, the events calendar is set to come alive with the return of the Tomorrowland Festival from 19-26 March 2022. Headliners so far announced include Afrojack, Armin van Buuren, Martin Solveig and Kungs. In the same month, Courchevel and Méribel will host the finals of the Skiing World Cup (16-20 March 2022) and, looking ahead to 2023, the Alpine Skiing World Championships (6-19 February 2023).

In terms of access to the French mountains, eco-conscious travellers will be cheered by the launch of the Travelski Express train, replacing the former Eurostar service and linking London with Moutiers and Bourg-St-Maurice. Chartered by Compagnie des Alpes and operating on weekends from 18 December 2021 – overnight on Fridays from St-Pancras and returning from France during the daytime on Saturdays – this direct service is bookable as part of a package including accommodation, ski passes and shuttle services to six resorts: La Plagne, Les Arcs, Les Menuires, Méribel, Tignes and Val d’Isere.

Atout France (France Tourism Development Agency) is responsible for promoting the development of the tourism industry, the country’s largest economic sector. Atout France’s primary mission is to monitor and analyse the supply and demand in the tourist market. Atout France is also committed to promoting destinations and tourism partners in and from France. This is achieved through marketing campaigns, online promotion, PR and working closely with the travel trade sector. Atout France is represented in the UK and Ireland from its office in London.