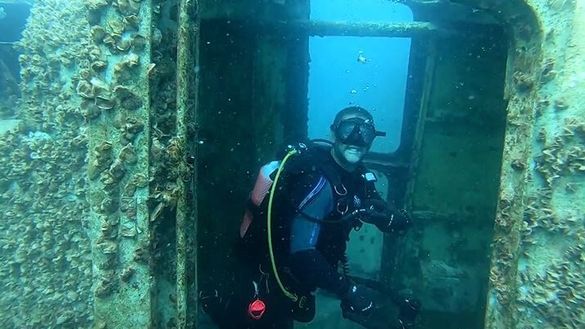 A rush of scuba divers from around Australia is expected to begin exploring the underwater wonderland created by the ex-HMAS Tobruk after the launch of commercial operations on February 25.

Fraser Coast Tourism & Events general manager Martin Simons said many divers had been waiting for months to dive on the wreck and operators were likely to be busy in the coming months as they worked through long waiting lists.

“The ship is resting on her starboard quarter about 25 nautical miles from Hervey Bay in 28 metres of water and it will be an extraordinary experience for beginner and experienced divers alike,” he said.

“The side of the ship will be within about 10m of the surface and divers of all skill levels will have access to the vessel’s major compartments as well an outside view of the propeller and rudder.”

When in service with the Royal Australian Navy, the 127m amphibious heavy-lift ship could carry up to 18 tanks, had two helicopter decks and provided accommodation for up to 520 troops.

The uniqueness of the Tobruk as a naval dive wreck was its size, Mr Simons said.

“There is plenty of room to move around its wide companionways and large transport decks,” he said.

Fraser Coast Mayor George Seymour said tourism was a major employer and economic driver on the Fraser Coast so the development of new attractions to entice visitors to the region was welcome.

“I look forward to working with the State Government on campaigns to promote the dive wreck nationally and internationally,” he said.

Mr Simons said the State Government was investing $1 million to promote tourism in the Wide Bay region with $500,000 spent promoting dive tourism and the other $500,000 marketing the major natural attractions of the Fraser Coast and Bundaberg regions.

“The sea life is extraordinary,” he said.

Mr Gibson added a grouper had even taken up residence at the wreck.

“We’ve got a mountain of people on a waiting list to dive the ship.”

Dive Hervey Bay owner Glenn Bowman, a dive instructor with more than 35 years of experience and retired paramedic, said the ex-HMAS Tobruk would be one of the best dives in Australia.

He said the safety and comfort of passengers were among his main concerns and his staff would be highly trained.

Mr Bowman will operate the dive side of the business while joint venture partner, Spirit of Hervey Bay owner, Glen Dorn will supply the transport to the wreck.

He said a new, high-speed vessel was due to be ready in about April-May and would replace the craft they would use to start operations.

Weather permitting, both companies will be out at the dive site with their first customers on the day it opens.

Ex-HMAS Tobruk, with the motto faithful and strong, was launched on March 1, 1980 by Lady Anne Cowan.

The vehicle deck had a roll-on, roll-off function and held 40 armoured vehicles and personnel carriers.

Its cabins provided accommodation for up to 520 troops.

It was involved in 26 major operations including to the Middle East, Fiji, the Solomon Islands, Bouganville, East Timor and Philippines before being decommissioned on July 31, 2015.

We are a regional tourism organisation bringing to life our spectacular part of the world. Visit us if you want to enjoy: