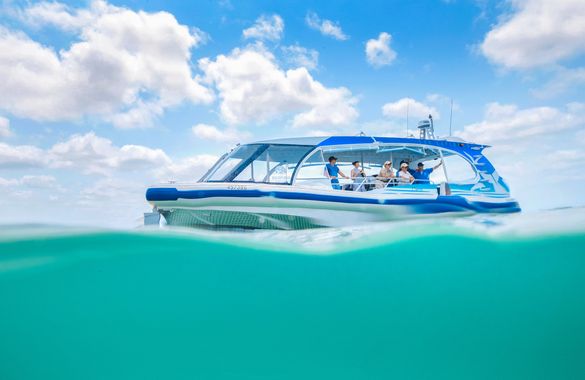 This state-of-the-art boat has arrived on Fraser Island’s shores, connecting guests with the destination’s magnificent scenery, and one of the most unique marine habitats in the world.

Once a previously inaccessible and unexplored part of Fraser Island, this untamed paradise can now, for the first time, be experienced directly from Kingfisher Bay Resort. Travellers will have the opportunity to swim, stand-up paddleboard, kayak and wander along the vast coastline, on this immersive nature experience exclusive to resort guests.

The Great Sandy Region was awarded Biosphere Reserve status by UNESCO in 2009, placing it in the same class as the Galapagos Islands, Central Amazon, the Everglades, and Uluru. The area comprises a mosaic of various habitats including seagrass, sandflats, mangroves, coral reefs, salt marsh and rocky shores.

In addition to granting the region’s protection status, these unique habitats also attract one of the world’s most inconspicuous yet intriguing marine species; the dugong.

“We’re host to one of the largest dugong populations in the world. Between welcoming these remarkable species to our shores and to now be officially named a Whale Heritage Site just reinforces how valuable this ecosystem is to our marine life” says Kingfisher Bay Resort Ranger, Cassie Duncan.

The 2500km squared expanse of the Great Sandy Marine Park’s calm, protected waters support an abundance of seagrass meadows; with these seven seagrass species acting as the feeding ground and primary food source of the dugong.

Sightings are rare, yet sought-after within the Fraser Coast region, with this mysterious mammal casting a strong appeal for many domestic and international visitors.

With a bachelor’s degree in Marine Science, Animal ecologist Cassie is one of the 7-strong team of Ranger guides that will each accompany Sea Explorer’s expert local skipper on the daily eco cruises, offering interpretation and showcasing the various natural sights and wildlife along the way, including dolphins and sea turtles.

During the months of August to October, passengers will also have the chance to spot some of the majestic humpbacks whilst aboard Sea Explorer, as thousands of whales famously migrate to the region each year.

In addition to daily cruises, Sea Explorer operates sunset sessions along the island’s western bay, featuring an onboard bar with a complimentary beverage and canapes, with resort transfers from Hervey Bay also available upon demand.