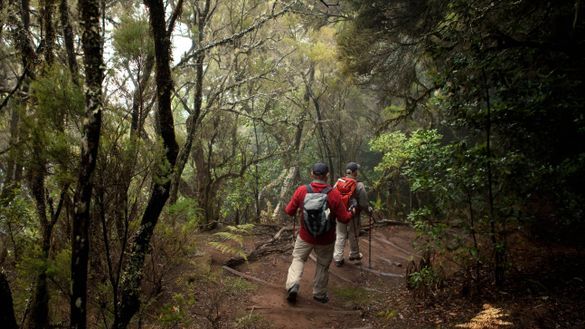 Garajonay National Park, located in the heart of La Gomera, is home to a green paradise of mist-covered trees reaching heights of over 30 metres, towering over their trunks, roots and the stones below. The laurel forest of Garajonay National Park is one of the most important of its kind in the world. It’s a relic that allows us to travel to the tertiary age, as was the subtropical forest that covered the entire Mediterranean basin and North Africa 20 million years ago. “This forest is a living organism that is affected by everything,” explains Marcelino del Arco, professor at the University of La Laguna, “and has existed for more than two million years.”

The laurel forests are spectacular subtropical forests typical of humid and warm places, home to large trees, vines and lianas. With thanks to Del Arco, a professor specialised in Canarian vegetation, the vegetal cartography of this park was declared a World Heritage Site by UNESCO in 1981. “You have to have the soul of an explorer when you walk through this extension of almost 4000 hectares” says Del Arco. He adds “The interesting thing is seeing the importance of its antiquity and its conservation“.

“The forest,” Del Arco says, “is not just a forest of laurels, but of plants from different families, with leaves that resemble those of the laurel and turn reddish, as well as linden trees, which prefer the very wet soil and fog“.

The mocan, palo blanco, barbusano, heather and faya are just some of the 484 species of flora that can be admired in the Garajonay National Park. In the more humid valleys facing north, we find the laurel forest of the valley with vines and lindens. On the same humid slopes lives the laurel forest comprised of laurel, faya and small-leaved holly. On the summits, where the trade wind is greater, the enigmatic summit heath appears while the faya and tree heath dominate on the southern slope. There are native species to the island such the wild orange tree, the Macaronesian cedar and barbusano. Moreover, a multitude of lichens, fungi and mosses can be found, as well as numerous invertebrates, amphibians, reptiles and birds – such as the native laurel pigeon and Bolle’s pigeon.

Even before mankind roamed the planet, there was laurel forest on La Gomera “brought by birds leaving their seeds in the ground,” says Pedro Oromí Masoliver, professor of zoology. Walking along its paths one understands that the forests are not only the lungs of the planet, but also its memory.

Juana María González, professor of the biology department at the University of La Laguna, explains that “for an unforgettable excursion in Garajonay you have to take a magnifying glass and observe this kind of species that live inside the laurel forest, inside the mosses, where smaller mosses live.” Oromí Masoliver also believes that to really feel the power of nature in this forest “you have to lift stones, looking closely at the bark of the trunks, or go and look under the branches, and find unique animal species and their way of living.” The biologist explains that one of his most exciting discoveries “was in Garajonay cave, finding species that have evolved to live outside the caves.” He remembers the first time he walked through Garajonay, when he had never seen the laurel forest “and this Dantesque landscape, which seems decrepit, left me astonished; for a clean forest is not a forest rich in life. The more logs, moss and clutter on its paths, the more alive it is,” he says.

Its trails are walked on by animals unique to this place and its endemic mosses have developed the ability to retain water for months like sponges. “We must bear in mind that the Garajonay forest is at the gates of a desert, and yet,” he adds “it is one of the most important forests in the world and one of the few remaining with specimens from the Tertiary Era.”

Experts say that the mist is the crucial element for the life and magic of this forest. “The horizontal rain mist is especially noticeable in the crest area. A very intense fog rain is formed there that allows this whole ecosystem to grow,” says Del Arco, “the trade wind, if it blows hard, helps to bring in and capture the water, which benefits the whole forest.”

Garajonay has a Visitor’s Center in the area called Las Bolas, which can be easily reached by car, bus or bicycle from the capital, San Sebastian de La Gomera. Mountain lovers can spend the night in the rural lodgings of this area and enjoy the spectacular sunrise.

Check out some other laurel forests in the Canary Islands…

The 511 hectares of the El Canal and Los Tilos estates in La Palma are located between ravines at an altitude of 1000 metres on an island that has been declared a Biosphere Reserve. The laurel forest lives there thanks to the water that emanates from the rocky walls and falls into the ravine, becoming a stream. This subtropical forest boasts trees of about twenty meters high including laurels and lindens as well as vines and species such as the white pigeon. Under these trees, the ferns also receive the horizontal rain from the trade winds that flow into the ground and moisten it to fill it with life.

The Anaga forest in Tenerife

The laurel forest is one of the treasures hidden in the Anaga Massif Biosphere Reserve, with a special proliferation in the Monte del Agua trail. Heathers, olive trees, barbusanos, vines and lindens receive the humidity of the trade winds. Here in Tenerife, the island where the Teide Volcano, the highest peak in Spain is located, lies this living fossil from the Tertiary Age, the laurel forest.

The 91 hectares of the forest of Los Tilos de Moya in Gran Canaria, where more than 100 endemic species live, is a Special Natural Reserve due to its great environmental value. The lush vegetation of the laurel forest is located in the municipality of Moya, in the north of the island, sheltered by low clouds and emerges a subtropical forest that has survived after millions of years.

The Hezal Forest in El Hierro

The westernmost region of the Canary Islands, and the second smallest after La Graciosa, is home to the El Brezal rainforest. This is the domain of the so-called ‘monteverde’, where some species typical of the laurel forest mix with fayas, heathers, ferns and other endemic species, creating a magical atmosphere that can be enjoyed thanks to the route that crosses through it.