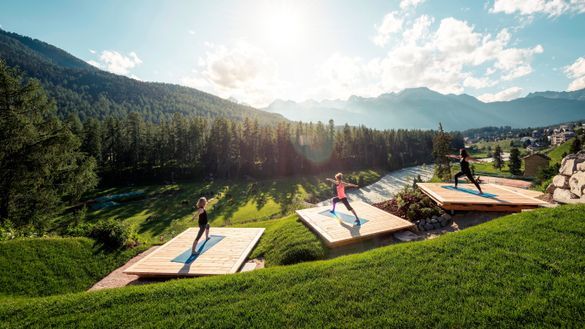 Pontresina, Switzerland – Grand Hotel Kronenhof (www.kronenhof.com) has found the perfect solution to ease all the anxiety generated by the Covid-19 pandemic: it has created outdoor spa platforms for the summer 2020 season that are perfect for socially-distanced yoga, Pilates and meditation classes.

The four wooden platforms, which have been assembled on slightly different levels on the slope that leads from the Grand Hotel Kronenhof gardens down to the Flaz river, add another level of seclusion for yogis while making the most of the calm-instilling Engadine Valley panorama: the glistening Val Roseg glacier is clearly visible to the south while the beautiful Staz forest lies directly in front, the other side of the Flaz.

This means classes, which are provided on a complimentary basis by the hotel as part of its daily wellness programme (that also includes aqua aerobics, TRX Workout and more), are accompanied by the gentle rumblings of the river below and the sweet fragrance of wildflowers, creating the most idyllic environment for a relaxing wellness session.

The yoga platforms build on Grand Hotel Kronenhof’s already well-established focus on wellness in the great outdoors. In addition to some of the more obvious activities on offer in the Swiss Alps, such as hiking, mountain biking, stand-up paddling and wild swimming, the hotel has incorporated goat yoga, whey baths and forest bathing into its repertoire in recent years, making it the obvious choice for those who want to get out into the open, away from it all and simply switch off.

Grand Hotel Kronenhof summer rates start from CHF455 (approx. £390) for two people sharing a double room on a half-board basis. Alternatively, upgrade to a “Suite Summer Deal” from CHF599 (approx. £515) for two people sharing a Suite on a B&B basis. Both rates include unlimited access to the Kronenhof Spa, Kulm Golf and Kulm tennis courts, as well as unlimited use of all the mountain railways in the Engadine and St Moritz area. Book online at www.kronenhof.com or call +41 81 830 3030. Grand Hotel Kronenhof closes on 18 October 2020.

Grand Hotel Kronenhof (www.kronenhof.com), located in Pontresina, six miles from St. Moritz, offers the best of both worlds: the chance to enjoy the glitz of St. Moritz, while staying in a peaceful mountain village.

Grand Hotel Kronenhof has a rich and interesting history, having first opened its doors in the first half of the 19th century as a guesthouse. However, the main part of the current building, which is a registered historical landmark, was built at the very end of the 19th century in Neo-Baroque style. The latest wing, completed in November 2007 and costing CHF 35 million (approximately £24 million), consists of 28 new guest rooms and a stunning spa complex covering more than 2000 square metres. More recently, the internationally-renowned interior architect Pierre-Yves Rochon has been renovating a few guest rooms per year, in his own inimitable style, along with the creation of an elegant cigar lounge and adjoining billiards room.

The spa is certainly one of the hotel’s highlights and has been named “the best Alpine spa” (according to Tyler Brule writing in the FT, November 2009). Facilities include a 20m indoor infinity pool with counter-current system, a flotation pool with underwater music, a wide range of saunas and steam rooms, a luxurious private suite for couples to enjoy wraps and massages together, and – for the perfect final touch – a crackling log fire in the relaxation room.

Gourmet cuisine is also a specialty at the Grand Hotel Kronenhof. Awarded the title of GaultMillau Hotel of the Year in 2009, it has three restaurants (the formal Grand Restaurant in an elegant Neo-Baroque vaulted room, Gourmet Restaurant Kronenstübli serving Italian-Mediterranean cuisine with 16 GaultMillau points and the informal Le Pavillon for light lunches). In addition, the hotel features a 19th-century original bowling alley where Swiss raclette is served.

Finally, Grand Hotel Kronenhof is renowned for its extensive children’s activities and facilities (a kids’ playroom and Rondelle, a restaurant just for younger members of the family).

Recent awards for the Grand Hotel Kronenhof include:

Both the Grand Hotel Kronenhof and its sister property Kulm Hotel St. Moritz are owned by the Niarchos family.