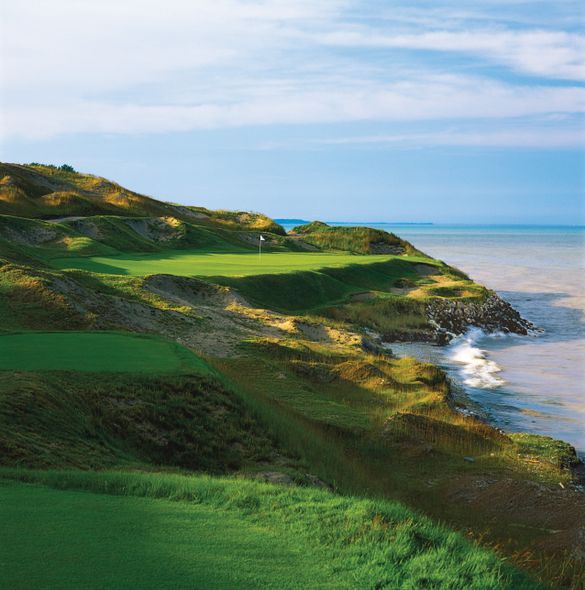 In 2020, the Great Lakes USA region plays host once again to the Ryder Cup when the biennial competition takes place in Whistling Straits, Kohler in Wisconsin, 22-27 September.

This is the fourth time since 2004 that the Ryder Cup has taken place in the region, which consists of the states of Michigan, Illinois, Minnesota, Wisconsin and Ohio. In 2016, it was held at Hazeltine Golf Club in Minnesota which hosts it again in 2028. Medinah, Illinois was the destination in 2012 and in 2004 Oaklands Hills in Michigan hosted the event.  The sheer number of courses, their top quality, their affordability and the sunny weather, with an average temperature of 26 degrees celsius in the summer months, make the Great Lakes states a mecca for golf.

The 2020 Ryder Cup is expected to be one of the largest sporting events ever hosted in the state of Wisconsin and Whistling Straits is the first public course in a generation to host the Ryder Cup; it also hosted the 2004, 2010 and 2015 PGA Championships.

Wisconsin is home to over 60 golf resorts and 500 public golf courses. North-west of Milwaukee, Erin Hills Golf Course in Hartford is a public course that played host to the 2017 US Open, while Lawsonia at Green Lake, which dates back to 1930, has 36 holes of championship-quality golf – the Links Course, with gently rolling terrain and 90 steep bunkers, and the Woodlands Course, with tree-lined fairways and about 80 traps.

Golfers will find more than 500 courses scattered throughout Minnesota, 90 percent of which are public. The season can stretch from April to November depending on the weather. The wide variety of places to tee off ranges from city and suburban courses to rugged north woods terrain and sweeping Mississippi River Valley vistas.

The Ryder Cup was held in Minnesota in 2016, at the magnificent Hazeltine National Golf Club. And as far as public courses are concerned, The Classic at Madden’s Resort in Brainerd, The Quarry at Giants Ridge in Biwabik, and The Wilderness at Fortune Bay, Tower, are reckoned to be the three best in the state.

The Legend at Giant’s Ridge is set on more than 250 acres. The course, designed by Jeff Brauer, plays alongside the base of the resort’s ski mountain and has gentle undulations up and down. The third hole has a most unique feature — a giant paw-shaped bunker, paying tribute to the legend of the Ojibwe Native American legend of Mesabi, a giant who lived in the area and collected treasures, which would come to be the area’s abundant wildlife.

Ohio is home to many beautiful golf courses, some of which are recognised nationally for their difficulty, landscape and competitions. Muirfield Village Golf Course in Dublin (near Columbus) was founded by Jack Nicklaus and he holds the Memorial Tournament there every June; it was also the location for the 1987 Ryder Cup. Inverness Club in Toledo will host the 2021 Solheim Cup.

Great public courses include Virtues Golf Club near Columbus, a top 100 ranked course and The Quarry Golf Club near Cleveland which is built on an old quarry dating back to the 1800’s. The Avalon Lakes course at the semi-public Avalon Lakes Golf and Country Club in Warren is a parkland layout designed by world-renowned golf-course architect Pete Dye.

A must-see attraction in Ohio for golf enthusiasts is the Jack Nicklaus museum in his hometown of Columbus. Here you can take an immersive tour through the great golfer’s career and view one of the greatest collections of golf memorabilia.

Northern Michigan is known as America’s Golf Capital. This region has lured the world’s finest golf architects in search of the perfect setting to create 29 championship golf courses. Featuring bent grass fairways and greens, America’s Golf Capital tours will overwhelm and impress with their beauty and playability. Discover glacial-carved rolling terrain, fairways cut through dense forests, and sweeping vistas of pristine lakes and rivers. The Loop at Forest Dunes in Roscommon features 18 greens that can be played two ways – the Black Route clockwise and the Red Route, on the same greens off a different set of tees, counter-clockwise. Forest Dunes Club now has two new courses to go along with its Tom Weiskopf-designed flagship course that is ranked among the nation’s top 25 public tracks.

With more than 650 public golf courses in Michigan, the state has a course for every level of play. When you golf the Great Lakes Bay area of Michigan, get ready for miles upon miles of lush, rolling greens with nothing but jaw-dropping landscapes as your backdrop. That’s because the region is home to four Championship courses and more than 20 other exciting places to play. Michigan will host two PGA Tour Champions tournaments in 2020 as well as the annual Rocket Mortgage Classic at Detroit Golf Club.

The Pete Dye Golf Trail is a one-of-a-kind collection of golf courses, only found in Indiana.  He started his career in Indiana and his legacy is dotted across our landscape. The Pete Dye Golf Trail takes players from the scenic lakeside community of Culver through the bustling college town of West Lafayette Indiana. The hub of the trail revolves around the thriving suburbs of Hamilton County and the distinctly urban experience available in Indianapolis. Finally, the trail culminates at the breath-taking French Lick Resort. Originally conceived as a sketch by Dye on a napkin at a nearby restaurant, this hilltop course (it’s built on the highest point in Indiana) offers 40-mile panoramic views of the Hoosier National Forest. While the course stretches to over 8,100 yards from the tips, it features five sets of tees – beginning at 5,100 feet – making it playable by golfers of every skill level.

Maple Creek Golf and Country Club was the first 18-hole course designed and built by Pete and Alice, created in October of 1961. Due to the long history, Maple Creek has a large collection of Pete Dye memorabilia in the newly renovated clubhouse.  Included in the memorabilia is the world’s only complete logo golf ball collection of each Pete Dye golf course, which includes over 150 golf balls displayed in a beautiful custom lit shadow box in the clubhouse’s Dye History Hallway.

Illinois has a wealth of great golf courses, including the world-famous Medinah which offers three world-renowned golf courses and the highest quality facilities and family-oriented amenities to its members.

Harborside International’s quirky city golf courses were designed by Dick Nugent to bring the great Scottish tradition of seaside links golf to Chicago. This fascinating course, built on a former landfill and scoured by the winds from Lake Michigan, is often compared to the iconic public golf courses of Scotland. Minutes from Chicago’s Loop, Harborside offers two courses, Port and Starboard, a driving range and practice facility.

Set amid the rolling hills of north-western Illinois, Eagle Ridge has four golf courses. Their jewel is the multi award-winning General, an 18-hole, par 72 course with over 250 feet of elevation changes throughout.  Eagle Ridge offers a wide range of places to stay, three restaurants, a spa and fitness centre with indoor/outdoor pool, sauna and steam room.

The Great Lakes USA is the largest expanse of freshwater in the world with a unique and diverse landscape. This region which is the size of continental Europe includes the U.S. states of Illinois, Indiana, Michigan, Minnesota, Ohio, and Wisconsin. For further information on the Great Lakes USA, please contact Fiona Pettitt at Cellet Marketing & Public Relations on 01295 722816