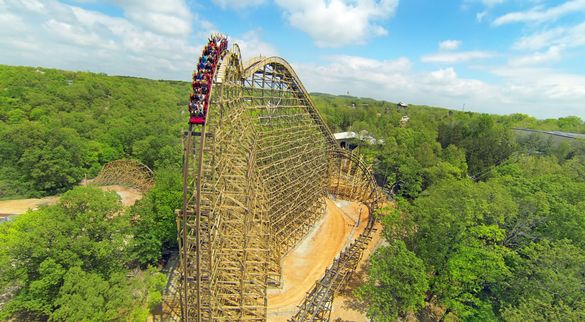 Notable rides in the 40-attraction collection include world footprint coasters such as  the towering Time Traveler roller coaster that vaults guests over a 10-story, 90-degree drop in a steampunk-inspired time machine at a top speed of 50.3 miles per hour and is the “Fastest, Steepest & Tallest Spinning Coaster in the World.” Outlaw Run, a record-breaking wood roller coaster, inspired by the historical journeys of pioneers heading west into unknown territory, has stagecoach-themed coaster cars mimicking an out-of-control run from an outlaw on this Guinness World Record-holder for “Steepest Drop on a Wooden Coaster.” The newest adventure, Mystic River Falls raft ride features a 4.5-story waterfall drop, earning it the title “Tallest Drop on a Raft Ride in the Western Hemisphere.”

The park is also home to family-friendly rides, with areas designed for smaller children in Fireman’s Landing and in the park’s version of an 1880s World’s Fair—The Grand Exposition.

Performers on outdoor stages range from Bluegrass to Gospel to SpectraPop.  Many of the City’s home-style restaurants and artisan shops are opening, adding to a variety-filled getaway.

The internationally-awarded 1880s theme park in the Ozark Mountains near Branson, Missouri, is celebrating a 60th Anniversary Diamond Jubilee and is the reigning “America’s Best Amusement Park” as awarded by readers of USA TODAY 10Best. Known as a showcase of the spirit of adventure, Silver Dollar City steps back in time to America’s 1880s with more than 40 rides & attractions, world-class festivals, much heralded and ever changing home-style food offerings, shows on stages throughout the park plus a demonstrating artisan colony 100-strong. Founded above a massive cave six decades ago, Silver Dollar City is the original property of Herschend Family Entertainment Corporation, the largest family-owned themed attractions company in the nation.  silverdollarcity.com