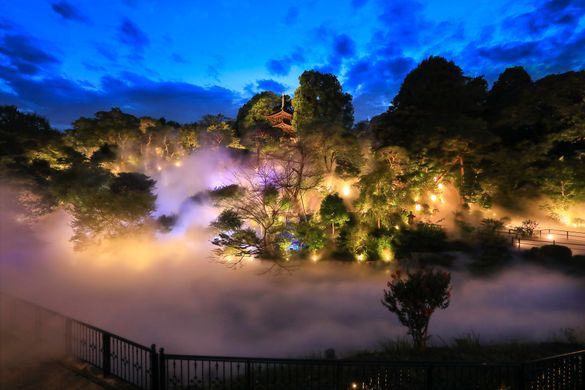 Hotel Chinzanso Tokyo, a luxury urban resort, will launch “Tokyo Sea of Clouds” and “One Thousand Lights” on October 1st to celebrate a notable milestone in the history of its renowned Japanese garden.

For hundreds of years, the Chinzanso garden’s location, now in the middle of Tokyo, has been cherished for its abundant wild camellia trees. In 1918, Baron Heitaro Fujita acquired the property from Gensui Prince Aritomo Yamagata, who had named the estate Chinzanso, meaning “villa on the hill of camellias.” Fujita Kanko, leading hotelier and the owner/manager of Hotel Chinzanso Tokyo, debuted the garden to the public in 1952, making 2022 its 70th anniversary. To commemorate this milestone, it will plant 10,000 additional camellia trees over the next three years and host various events.

“Our garden is what sets up apart,” says Shinsuke Yamashita, the hotel’s General Manager. “No other Tokyo hotel can ever offer such a vast green oasis. Many guests keep coming back to enjoy the garden, so we constantly come up with new ways to entertain.”

Tokyo Sea of Clouds: Normally seen in nature under specific conditions, the hotel will be artificially creating a sea of clouds several times a day, making this urban resort even more tranquil and one of a kind. Guests can marvel at the dreamlike views as if they were looking over the delicate clouds and greenery from the tops of mountains.

One Thousand Lights: From sundown to 11:00 pm each night, the garden will be illuminated by 1,000 LEDs, adding to the magic. The hotel is upgrading its popular night garden with dramatic effect for the first time in 12 years. Some of the garden’s scenic points such as the waterfall and historic buildings/artifacts will be illuminated.

Special dining and accommodation packages will also be offered for a limited time.

For more information on all related events/programs, visit:

Hotel Chinzanso Tokyo was rebranded and opened in January 2013. It is owned/managed by Fujita Kanko Inc., a publicly-traded tourism industry corporation headquartered in Tokyo, which operates 70 properties/facilities. The hotel’s facilities include 267 guest rooms/suites, nine restaurants, 38 meeting/banquet rooms, and a full-service spa with Japanese onsen. Its garden contains a wide variety of botanical species including 120+ cherry trees and 1,000+ camellia trees.