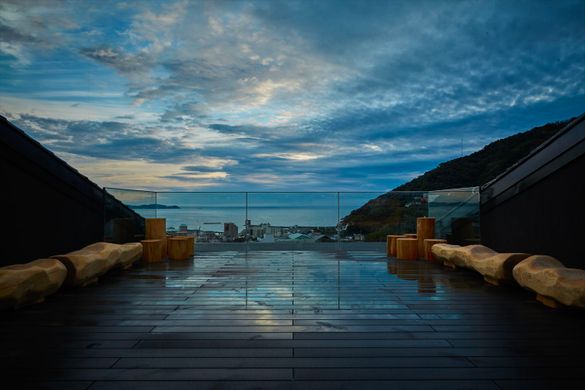 The coastal resort town of Koarashicho in Atami, the gateway to Shizuoka’s spectacular Izu Peninsula, is home to a new hot spring hotel, SOKI ATAMI. Offering panoramic ocean views and set within luscious green landscape the property, which opened its doors to guests on 1st November, is a relaxing and peaceful retreat for travellers to the region and just 40 minutes or so from Tokyo by bullet train.

All of the hotel’s 54 modern and spacious rooms come complete with their own private onsen (hot spring bath) either indoor or on an open-air terrace overlooking Atami Bay. There is also a larger communal onsen available as well as a steam sauna for female guests. Natural hot springs are thought to offer a wealth of healing and health benefits and are popular across Japan, but some of the oldest and most famous onsen resort towns can be found on the Izu Peninsula.

Other facilities at SOKI ATAMI include a garden planted with citrus trees and local flora and a top floor Tea Salon and Bar. Here guests can enjoy local tea, seasonal Japanese snacks and impressive views from an outdoor terrace of the region’s famous firework displays which are held regularly throughout the year.

In the south of Shizuoka prefecture, the Izu Peninsula is often referred to as “Japan’s Riviera”.  It was designated a Global Geopark by UNESCO in 2018 and boasts a spectacular natural environment from scenic mountains and idyllic beaches to rugged coastlines including the breathtaking Jogasaki Coast. Shizuoka is also home to the majestic Mount Fuji, and the western coast of the Izu Peninsula offers particularly fine views of this iconic mountain.

Within easy reach of Tokyo, Shizuoka is not only an ideal wellness destination with its wealth of natural onsen but is also a perfect choice for those wanting an active experience with sports including cycling, hiking, scuba diving, surfing, horseback riding, paragliding, mountain climbing and golf available. Rich in history and home to a number of spiritual shrines, traditional temples and historical castles, the region is also famous for its gastronomy, from delicious local street food and the freshest of  seafood to being a major producer of some of Japan’s most loved ingredients such as green tea and wasabi.

For more information about the SOKI ATAMI hotel, visit: www.so-ki.jp

Just one hour from Tokyo by bullet train, Shizuoka prefecture is home to the iconic Mount Fuji. It boasts a spectacular natural environment of coastline, mountains and lakes including the beautiful Izu Peninsula, which has been described as “Japan’s Riviera” and was designated as a Global Geopark by UNESCO in April 2018. The region is steeped in history, has a huge choice of traditional ryokan inns and onsen hot springs, and is also a gourmet paradise. Its natural environment produces some of the country’s best food and drink, from green tea and wasabi to fresh seafood. In fact, Shizuoka is Japan’s biggest producer of green tea.