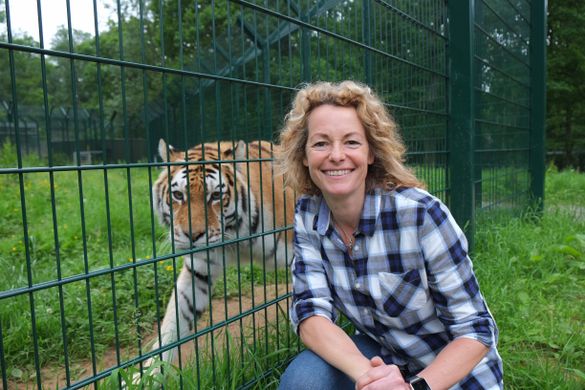 The guided tour, features video footage and gives viewers the chance to still enjoy the experience of travelling through the world-famous Safari Park from their own homes.

It will go live on the Wiltshire wildlife attraction’s Facebook page at 10am on Saturday, the time the park usually opens its gates to visitors, and will also be free to view on the Longleat website and across its digital platforms.

Utilising a mix of audio commentary with video footage and photos, the virtual tour also includes a newly-recorded introduction by Kate Humble.

Following the drive-through route through the park visitors will begin their virtual journey among the giraffe and zebra of the East Africa Reserve before heading into the notorious Monkey Drive Thru.

The 40-minute tour also features close encounters with Longleat’s big cats, including their famous lions, as well as tigers, cheetahs and wolves.

“I should be at Longleat now, filming a new series of Animal Park.  We hope to be able to return soon, but in the meantime, I’m going to be enjoying seeing all my favourite animals virtually too!” said Kate.

Longleat is hoping people will also make use of additional content available on their app including quizzes, factsheets which will accompany the tour.

“While Longleat is closed to visitors we wanted to give people the opportunity to still learn about and see the animals we have at the park,” said Longleat’s Marketing Director James Bailey.

“We have deliberately decided to launch it at the same time we normally open our gates to visitors and we’re hoping as many people as possible will watch it together.

“We’ve combined the existing Safari Park audio commentary by Kate, which visitors use when driving through the park, with video footage and photos to try and replicate the actual drive-through experience.

“The virtual tour also features drone footage and video which gives viewers unique new perspectives into the park and its animals.

“Hopefully it will help keep people entertained whilst restricted movement is in place, give Longleat’s many fans something new to watch and also provide a learning opportunity for youngsters.

“We’re making it freely available to everyone via our social media channels and website,” he added.