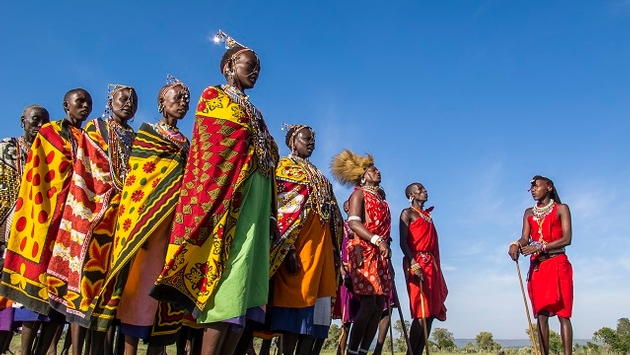 2012, Maasai elders from Amboseli, Chyulu, and Tsavo took the bold move of developing an alternative to the traditional Maasai rite of passage into manhood, which had always included hunting a lion.

The group of leaders developed the Maasai Olympics and redirected the age-old hunting tradition towards wildlife and habitat conservation.

The athletic event, which takes place in Kenya, has since grown to be a resounding success, and now men and women gather on the plains biennially, in the shadow of Mount Kilimanjaro, to compete in a showcase of endurance, skill, and strategy.

Extraordinary Journeys has just announced that it is partnering with Great Plains Conservation to offer a unique and rare vacation experience that includes attending this year’s Maasai Olympics on December 15.

Maasai warriors meanwhile, participate in sporting events ranging from track and spear-throwing to rungu-throwing a symbolic wooden club, and the traditional Maasai high jump (the most recognizable ritual, “the jumping dance,” of this culture).

Six regional competitions are held from July through October, culminating in the Olympics Day final in December. Each team represents a different manyatta (village), and they compete in front of their friends and family, international media, celebrities, government officials and a select group of travelers.

A life-impacting competition, the Maasai Olympics allows winners to earn educational scholarships, a stud bull and other honors and awards.

What’s more, surveys have found that the Olympics are an effective way to encourage conservation in the area. As of 2016, up to 93 percent of Maasai warriors reported they were less interested in lion killing and more interested in conservation due to the Maasai Olympics.

Extraordinary Journeys is offering three- and four-night trips built around the Olympic event. Departures will take place between December 13 and December 17.

This itinerary for this unique vacation also features excursions and wildlife experiences including afternoon and early evening game drives. There will also be guided bushwalks, bush breakfast and dinners, night drives, hiking, horseback riding (for all guests, novice to professional), mountain biking, tracking, and sleep-outs on private “star beds.”

Pricing for the Maasai Olympics itinerary starts at $2,930.00 per person. Space is extremely limited. For additional details and to book, call (212) 226-7331 or email info@ejafrica.com.