↓
Home→AIRLINES→Make the Most of Your Stopover in Western Australia 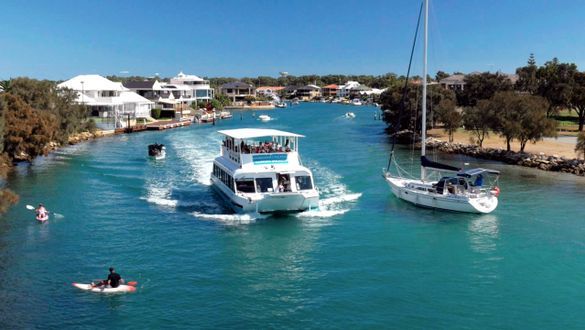 Qantas is now flying daily direct on the Perth – London route and people are making the most of the new service to take some time out and explore Western Australia.

For Australian passengers travelling to or from other parts of the country on the direct route, Qantas is offering a Perth stopover with no additional stopover fee, depending on fare type.

This is a fantastic way to break up the journey and see more than just Perth. Only an hour south of the capital by train or car, Mandurah and the Peel Region showcases the best of everything that WA is renowned for including stunning beaches and waterways, unrivalled seafood, world-recognised golf courses, spectacular views, history and culture, wineries, breweries, shopping and adventure.

Mandurah is Western Australia’s largest and fastest growing regional city and is set against a backdrop of magnificent beaches and an estuary twice the size of Sydney Harbour.

It has recently been named Western Australia’s Top Tourism Town and is the perfect base to take day trips to explore the wider Peel Region. In an easy half hour drive you’ll find beautiful wineries, breweries, winding waterways, rolling green hills and tiny timber towns nestled in the forest.

Mandurah and the Peel Region is home to one of Australia’s healthiest dolphin populations which you spot on a dolphin cruise or while dining in one of the many waterfront restaurants.

Seafood lovers will rejoice in the number of dining options available from the great Mandurah tradition of a picnic fish and chips on the newly refurbished foreshore to ‘catch and cook’ cruises featuring blue manna crabs, native to Mandurah waters, and rock lobster. If you enjoy a spot of fishing, you’re sure to land a catch in the Peel Region.

Mandurah boasts Western Australia’s own modern Venice, with a network of canals featuring luxury homes. You can hire a boat and cruise them yourself or join an organised tour. The canal homes are particularly spectacular on the warm summer nights of December when the locals participate in a spectacular Christmas lights display.

If it’s a holiday with a difference you’re after, Mandurah is the only place near Perth you can hire a houseboat. Completely unwind and take in the views while slowly meandering down the Murray River or Peel-Harvey-Estuary for days at a time.

Mandurah is less than an hour south of Perth. When driving, travel the Kwinana freeway south, easily accessible from many points in Perth, and exit at Mandjoogoordap Drive. Trains and buses operate between the two cities and depart from the Perth city centre. www.transperth.wa.gov.au

Mandurah and the Peel Region has a range of accommodation to suit all tastes and budgets. There is a choice of resort hotels, caravan and camping facilities, charming bed and breakfast accommodation, self-contained apartments, forest cabins and even houseboats for hire.

Buses operate around Mandurah, but if you want to explore the Peel Region extensively you can hire a car or join a tour. Taxis and Uber drivers are also available in Mandurah.

The Peel Region can be visited any time of the year. Being on the coast, it’s spectacular in spring and in summer. But during winter, the scenery is amazing. You can find something to do all year around.

Further Information on Mandurah and the Peel Region visit www.visitpeel.com.au