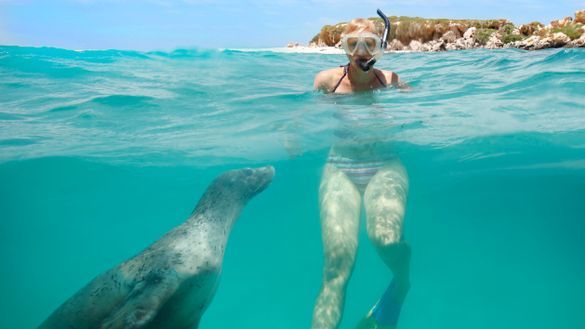 Sea lion tour operators in Jurien Bay continue to run impressive sea lion tours, now with the aid of new state-of-the-art boats. Thanks to the rise of social media, chiefly Instagram, sea lions have consistently drawn positive attention, with many visitors wishing to meet the creatures. Their puppy-like nature and unreserved curiosity towards swimmers often result in impressive underwater footage. Turquoise Safaris‘ new boat, Sound Waves, has been touring from early November and will continue to operate year-round. The vessel is a custom built, ten metre long fibreglass catamaran, which can carry up to 12 passengers and is universally accessible with on board facilities.

J-Bay (named by the locals) offers fantastic fishing, snorkelling and 4WD conditions. Additionally, only a stone’s throw from Jurien Bay is Nambung National Park, home to the iconic Pinnacles Desert – a favourite pit-stop for road trippers.

Sea lion tours continue to rise in popularity among visitors to the Indian Ocean Drive area, and depart daily from Jurien Bay and Green Head. The Australian sea lion is one of the most endangered pinnipeds across the globe; it’s believed there are less than 12,000 remaining along the country’s southern coastline. Large colonies inhabit areas off the coast of Jurien Bay, leading to an increased chance of spotting the creatures whilst on tour. Hundreds of sea lions live on the isolated Buller and North Fisherman islands, as well as Essex Rocks only a few kilometres off the coastline.

Jurien Bay has firmly established itself as a family-favourite destination, and continues to be a short break destination of choice – especially among Perthites. An easy 2.5 hour drive north of Perth, Jurien Bay boasts affordable accommodation options embracing a nostalgic seaside getaway where minimal effort is required.

Visit australiascoralcoast.com for more information regarding Jurien Bay sea lion tours, Turquoise Safaris or planning your next getaway to J-Bay.