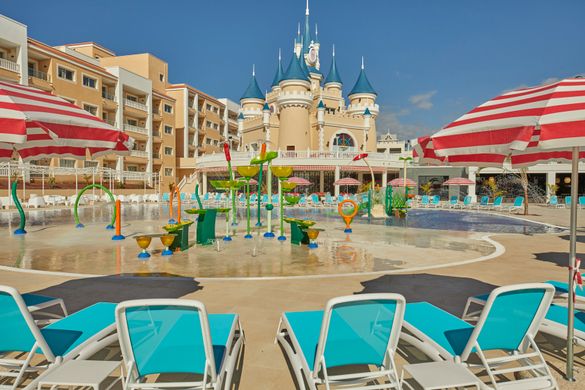 New hotel, Fantasia Bahia Principe Tenerife, is the latest themed hotel concept from the Bahia Principe hotel group and the most recent property to open on the Canary Island of Tenerife. The new hotel offers a magical family holiday filled with unique and memorable experiences for all ages. With over 370 rooms, including 286 Family Master Suites (capacity five people) and swim-up rooms (adults only), themed areas, five restaurants and six bars, the all-inclusive hotel will set the standard in comprehensive, multi-generational breaks. The star of the show is an enchantingfairytale castle in the centre of the property which plays host to spectacular, multi-media theatrical shows every night. Other special features include a large-scale waterpark; tailor-made kids spa treatments at the Bahia Spa; exclusive teens club, The Loft, complete with private disco; and kids club with a range of activities from costume workshops and cooking experiences to island expeditions.  Fantasia Bahia Principe is the perfect spot to explore family-friendly festivals and events taking place during the winter months in Tenerife. These events include:

The ‘Reyes Magos’ is Spain’s version of Christmas, taking place from 5 to 6 January, during which children across the country receive presents from the ‘Reyes Magos’ (Four Kings). The main celebrations take place on 6 January in Santa Cruz on the north of Tenerife, when the kings arrive by helicopter before winding their way down the streets of the capital distributing presents to local children. Festivities also take place in other parts of Tenerife such as in Los Cristianos, where the kings arrive by boat into the harbour and the parade through the centre of the city on camel back. www.webtenerife.co.uk

Every Thursday afternoon from 4pm until 10pm in Los Cristianos in the south of Tenerife, visitors can come and enjoy the Canaries Folk Fest – a traditional food, art and crafts market that takes place until the end of March. The festival offers a glimpse into Tenerife’s local culture, history and gastronomy with a number of events including dance performances from folkloric bands, as well as food tastings and handicraft exhibitions. www.webtenerife.co.uk/what-to-do/culture/festivals/canarias-folk-fest-arona.htm

From 18 February to 10 March 2019, Tenerife will come alive for the Santa Cruz de Tenerife Carnival with colourful parades, live concerts and plenty of entertainment to keep the whole family happy. One of the most popular festivals in the world and declared a ‘Fiesta of International Tourist Interest’, the Tenerife Carnival lasts several weeks and mainly takes place in the city of Santa Cruz on the north of the island. Visitors can expect samba dancing, beauty pageants, and a stunning parade of vintage and classic cars. www.webtenerife.co.uk/what-to-do/carnival

Overlapping with the Santa Cruz de Tenerife Carnival, the Puerto de la Cruz festival, from 18 February to 10 March 2019, will also feature spectacular parades and special events, all taking place in a fun-filled and joyful atmosphere. Highlights of the festival include the men’s high heel marathon and the closing ceremony, during which revellers take part in the burial of the sardine – a satirical event with fake mourners who burry a large fake sardine to mark the end of the festivities. www.webtenerife.co.uk/what-to-do/carnival/other-regions/puerto-cruz-carnival.htm

Grupo Piñero’s Bahia Principe hotel chain has a presence in the Dominican Republic, where it is the market leader in terms of the number of hotel beds, as well as the Riviera Maya (Mexico), Jamaica and Spain (in the Canaries and Balearic Islands). Year after year, the Bahia Principe hotels receive a large part of the most prestigious international awards for quality that are given in