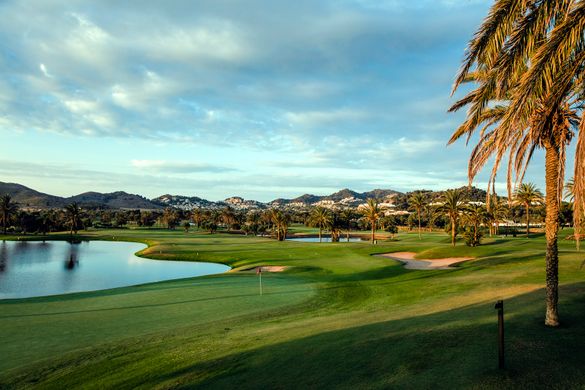 La Manga Club is celebrating unprecedented success in the golf travel market after being named as Spain’s best golf resort for an amazing eighth year in a row.

The top sports and leisure destination in Murcia, south-east Spain, which has been at the forefront of golf in Europe for more than 45 years, received double the number of votes of its nearest rival on its way to claiming one of the leading accolades at the 2019 Today’s Golfer Travel Awards.

Voted for annually by readers of the UK’s best-selling golf magazine, the awards recognise the most prestigious golf venues in the UK and Europe, with La Manga Club winning the top honour in Spain every year since it was introduced.

Eduardo Ruiz, general director of sports at La Manga Club, said: “To be named as the best resort in Spain for the last eight years is an incredible achievement, and is continued recognition for the key role La Manga Club has played in promoting golf travel across the UK and Europe.

“The long-term appeal of the resort to a variety of the different markets and groups is something that we’re very proud of, and this new honour is a fantastic way to launch our 2019 season.”

Kevin Brown, travel editor at Today’s Golfer magazine, said: “Some outstanding golf resorts have emerged in Spain and throughout Europe in recent times, but La Manga Club still remains the best of the bunch and the benchmark for the best part of half-a-century as far as our readers are concerned.

“The world-class resort, which impressively delivers both on and off the golf course, not only won its latest award but did so by an overwhelming margin. It’s a sheer class act.”
Nestling across 1,400 acres, La Manga Club is well-established as a firm favourite with golfers from the UK, Europe and beyond, with its extensive facilities including three acclaimed 18-hole golf courses, a nine-hole, par-47 academy course and first-class golf training centre.

The latest honour to be bestowed on the resort means that it has started the new year in the same award-winning fashion that it ended 2018.

The official overseas training base of the Lawn Tennis Association (LTA), the resort’s other facilities include a 28-court tennis centre and 2,000sqm spa and fitness centre, while the resort is the host to Spain’s only official Chelsea FC Foundation Soccer School. In addition, La Manga Club features the choice of a five-star hotel, four-star serviced apartments and townhouses and more than 15 bars and restaurants.

Press release written and distributed on behalf of La Manga Club by Azalea.

Located in a magnificent natural environment next to Calblanque National Park and the Mediterranean Sea, with a mild year-round climate and enjoying exceptional security and privacy, the exclusive resort of La Manga Club (Los Belones, Cartagena, Murcia) offers luxury, leisure and sport in the same place, and is set just 20 minutes from Murcia airport, a 30-minute drive from the city’s new Corvera airport – which opens in January 2019 – and is an hour away from Alicante.  Founded in 1972, the resort now covers an area of 566 hectares containing accommodation, professional sports facilities, relaxation zones, first-class real estate and a private community of 2,300 residents, in a region which boasts more than 350 days’ of sun and is surrounded by natural parks and untouched beaches. La Manga Club’s extensive facilities include:
– A five-star hotel: Hotel Príncipe Felipe 5*- Tourist apartments: Las Lomas Village 4*- Luxury villas- Three 18-hole golf courses, an academy and par-47 pitch-and-putt course- A 28-court tennis centre- Eight FIFA-sized football pitches- 2,000m2 Wellness Centre  – The resort’s famous La Cala beach and restaurant, overlooking the Mediterranean – More than 15 bars and restaurants

Additionally, there is the opportunity to rent a property, purchase a plot of land or buy any of the villas already available that have been built on the complex, and benefit from the services and commodities that a five-star hotel has to offer, such as the sports facilities on the resort. With the variety of activities and facilities available, La Manga Club has firmly established itself as one of the best sports and leisure destination resorts in Europe, and has been the proud recipient of a host of prestigious international awards and accolades over the last four decades.