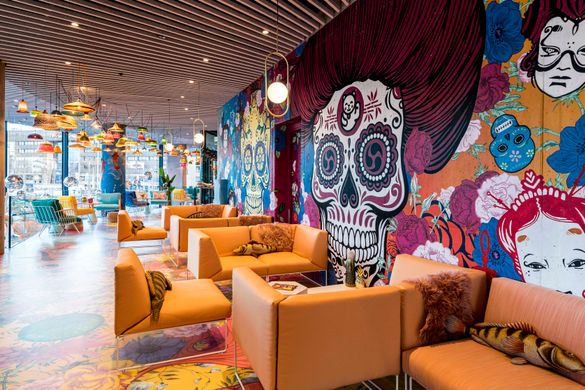 Amsterdam, metropolitan and cosmopolitan city that it is, is seen as a cultural melting pot. Inspired by that idea, the first nhow hotel in the Dutch capital, an iconic four-star hotel, has opened its doors as a meeting place where contemporary art, design, fine dining and cultural expression echo the multicultural spirit that characterises this great city.

Cultural influences from all around the world are on display throughout the hotel’s 24 storeys. A vibrant mix of colours, lights and patterns come together with international symbols such as the mandalas of India, skulls of Mexico and the cherry blossoms of Japan to create an exciting and striking cultural fusion. The hotel’s 650 rooms have been designed to follow the six cardinal points to which the hotel points: north, northeast, east, south, southwest and southeast.

Its location, beside the RAI Amsterdam Convention Centre and just a 10-minute walk from the city centre, makes this hotel an ideal destination for business travellers. nhow Amsterdam RAI has nine new meeting rooms, with capacity for 145 people, all of which are located on the 23rd floor, giving them stunning views over the city.

The food offering is spearheaded by The Entourage Group, an internationally renowned hospitality group. nhow Amsterdam RAI brings the city two new eateries: a restaurant and bar on the first floor and a sky lounge and bar on the top floor, at a height of 91 metres with panoramic views out over the city.

Hermann Spatt, nhow Amsterdam RAI’s General Manager, said, “at nhow, we believe a hotel should be an active part of the city; a crossroads for people, ideas, art, good food and cultural adventures. We want to welcome tourists, business travellers and locals”. He went on to note that “the building’s interior design crystallises the cultural melting pot this city has been for over 400 years. We encourage everyone to come and experience nhow for themselves”.

The history of Amsterdam, the source of inspiration for the architects

The newly-built nhow Amsterdam RAI has taken up its place as the largest hotel in the Benelux market. The iconic building housing the hotel was designed by Reinier de Graaf, an architect from the OMA Studio, founded by Rem Koolhaas. It is made up of three overlapping triangles pointing in different directions, symbolising the multicultural backdrop that characterises the past, present and future of the city of Amsterdam.

Maarten Markus, Managing Director for Northern Europe at NH Hotel Group said, “2020 is off to a brilliant start. Only a matter of days into this New Year and we are already inaugurating our second nhow. nhow London opened its doors on 2nd January only to be followed by the largest newly built hotel in Benelux, nhow Amsterdam RAI”. Maarten added, “we are really raising the bar in terms of offering guests unforgettable experiences; in this instance, literally, with a building that stretches 91 metres tall. We are very proud to be able to offer business and leisure travellers in Europe these two new extraordinary and mould-breaking hotels”.

NH Hotel Group remains strategically committed to its nhow brand and its growth. Over the next three years the Company plans to open another four establishments under this trademark:  nhow Brussels, nhow Frankfurt, nhow Rome and nhow Lima.

For more information, please visit https://www.nhow-hotels.com/en/nhow-amsterdam-rai. The following link will bring you to a video showing how the hotel was built.

nhow is NH Hotel Group’s disruptive hotel brand, known for its iconic establishments. Inspired by the cities in which they are located and designed by the leading creative minds of our times (Foster+Partners, OMA, founded by Rem Koolhaas, Karim Rashid, Sergei Tchoban, Teresa Sapey and Matteo Thun, among others), nhow is simultaneously a hotel and a creative hub. Each nhow establishment becomes a landmark in its city, a melting pot for creativity.

At a nhow hotel everything is unexpected, through-provoking and surprising. Every room, restaurant and lobby are an invitation to meditate, a call to take action in our lives, as embodied by the slogan #changenhow. Each guest will live their own personal experiences with one thing in common: the wow factor! Located in key urban districts undergoing a transformation, the nhow hotels quickly emerge as landmarks for self-discovery and experimentation through ‘artivism’. Why wait? The time is now, nhow.