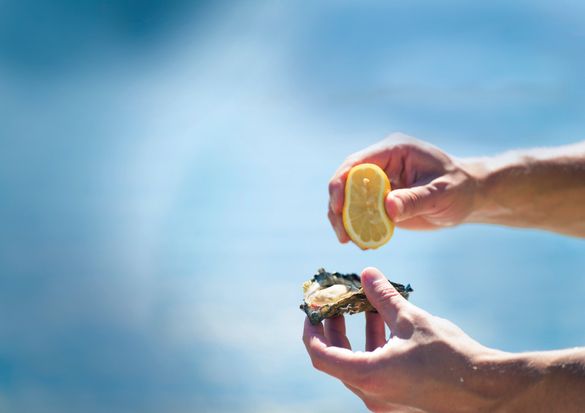 There’s no bad time of year to eat oysters across New South Wales — they regularly take home awards for their creaminess and flavour. But August is the prime time to sample this coveted mollusc, with Sydney rock and Pacific oysters both at their peak at this time. Discover the characteristics of the state’s oysters, and where to sample them on an epic self-guided trail, regardless of when you visit.

Choose your oyster
Complex flavours and lingering sweetness are just two of the reasons why Sydney rock oysters are regularly voted among the tastiest of their kind in the world. Native to Australia, these molluscs have been cultivated since the late 1800s, and can now be found across the state’s coastline.

While Pacific oysters are a relative newcomer to Australia’s waters, introduced from Japan in the 1940s, they’re now the country’s most common farmed variety. Despite this, they can only be enjoyed from the source in a few places along the NSW coast, including Port Stephens, north of Sydney, and Shoalhaven, south of Sydney. There’s a reason for their popularity: slightly larger and firmer than Sydney rocks, Pacific oysters have a fresh, salty flavour that is truly addictive. Also native to Australia is the Angasi, a type of flat oyster that is full bodied and rich. These tasty morsels are rather rare, so if you find one, don’t miss the opportunity to have a slurp.

The trail: North of Sydney
Around 400km north of Sydney on the state’s mid-North Coast, Port Macquarie sits at the mouth of the Hastings River. Its estuary is a popular playground for bottlenose dolphins and migrating whales (May through November). Once you’ve explored the region’s beaches and rainforest, and picked up a bottle of wine from a local vineyard, start your oyster adventure just to the south in the laid-back town of Laurieton. Savour freshly-shucked oysters overlooking the Camden Haven waters, or from the farm gate at Rockin’ Oysters. If you’re visiting Port Macquarie in December, be sure to attend Oysters in the Vines at Cassegrain Wines, the event uniting local drops with mountains of oysters.

Just 80 kilometres south of Port Macquarie lies Taree, where Stones Oysters & Seafood is the ultimate place to stock up on fresh oysters, plus prawns, lobsters, crabs and just-caught fish. It’s another 40km on to Forster, where you can discover these molluscs at Graham Barclay Oysters, the state’s largest supplier of Sydney rocks. This is part of the Great Lakes area (which includes Myall Lakes National Park), where you can surf, fish, swim and kayak around crystal-clear waters.

Further along the coast, the Soldiers Point peninsula juts from the southern shore of Port Stephens. It’s here you’ll find family-owned Holberts Oyster Farm, where you can enjoy a dozen or so at a waterside table with a bottle of wine.

The Hawkesbury River is 200km south; the oyster industry here dates back to the 1870s. In the town of Mooney Mooney, the Hawkesbury River Oyster Shed shucks while you wait. Nearby, the waterside hamlet of Ettalong Beach hosts the Brisbane Water Oyster Festival every November.

Sydney
There are dozens of places to sample oysters in Sydney, but you can’t go past the perennially bustling Sydney Fish Market for a selection of the state’s finest (alongside everything else from the sea). Pick up a dozen and head for a bench to enjoy them overlooking the water.

South of Sydney
Shuckers don’t get any faster than the owner of Jim Wild’s Oysters, occupying a shack at Greenwell Point near Nowra (160km south of Sydney). The estuary of the Crookhaven and Shoalhaven rivers is the breeding ground for Jim’s distinctive Greenwell Point rock and Pacific oysters.

Travel south 115km to discover the Oyster Shed and Pearly Oyster Bar on the banks of the Clyde River at Batemans Bay. Order shucked Sydney rocks as well as native Angasi oysters while soaking up sublime views.

From here south to Tathra (160km) is oyster heaven, the coastline characterised by oyster sheds, wharves, markets and restaurants where you can sample freshly shucked produce. At Tathra Oysters try Sydney rocks grown in the waters of Nelson’s Lake in Mimosa Rocks National Park, also known for its sea caves and towering rock stacks.

It’s a 30km drive on to Wheelers seafood restaurant in Pambula, where you can take a guided tour of the oyster factory. If you’ve ever wanted to learn how to shuck your own oysters (then enjoy with a squeeze of lemon), this is the place. This part of the NSW Sapphire Coast is home to a number of other oyster farms, including Broadwater Oysters, Hazelgrove Oysters and JJ Oysters, all selling produce from Pambula Lake.