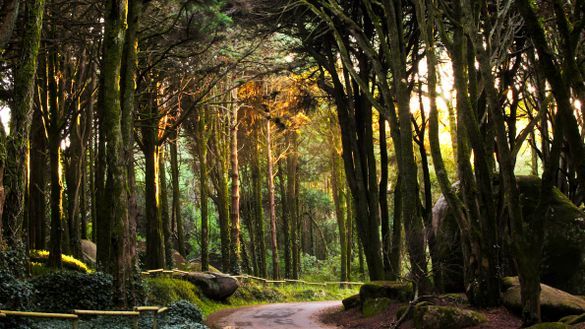 Lisbon Region is well-known as one of Europe’s most popular city break destinations, but it also offers tantalising choices for travellers looking to relax – or get active – in more natural surroundings. From breathtaking nature parks and wildlife protection zones to almost 100 km of spectacular beaches, Lisbon Tourism Association highlights some of the best options for a break away from the city.

Just 30 minutes south of the centre of Lisbon, the Arrábida Nature Park is one of the region’s most beautiful areas, with its deep blue seas, idyllic beaches and vibrant green hills as well as the 380m Serra do Risco cliff, the highest point on the Portuguese continental coast. Dotted with steep trails which are guaranteed to put the most avid hikers to the test – some areas are only accessible when accompanied by an official guide – caving, diving and climbing are also on offer for adventurous travellers who enjoy a challenge. Meanwhile, those looking for a more relaxing escape can head to the secluded beach of Portinho da Arrábida for its tranquil setting and breathtaking vistas.

Wetlands and Wildlife
Both the Sado Estuary Nature Reserve and Tagus Estuary Nature Reserve – the largest wetland in Portugal – are home to countless species of birds, the latter also welcoming a vast number of migratory birds every year, including spectacular flocks of flamingos that arrive every autumn.  For more “down to earth” wildlife, the Sado Estuary conservation area is a region of great importance for the bottlenose dolphin – known locally as the “dolphin of the Sado” – and home to several threatened species, such as the black bat and otter. The best way to explore this area is by joining one of the cruises that depart from the city of Setúbal while, in the Tagus Estuary, the Parque Linear Ribeirinho do Estuário do Tejo, offers a great alternative for those keen to explore on foot or by bike with several trails to choose from.

Go West …
Whilst Sintra is best known for its UNESCO World Heritage status and many architectural and historical gems, the Sintra-Cascais Natural Park is a place of great natural beauty. It covers an area of around 17,000 hectares with luxuriant, pine-scented hills rolling down to the Atlantic Ocean at continental Europe’s most westerly point, Cabo da Roca, where the land drops into the sea from a 140m high cliffs offering once in a lifetime views. The ocean winds which shape the dunes and whistle through the trees also make this a great area for windsurfing, surfing and bodyboarding. Running along the north of the park, the Sintra tram connects Sintra with the coast at Praia das Maçãs, for a traditional and slower-paced way to take in the rural panoramas.

The Lisbon region’s natural landscapes are home to even more options for visitors looking for an active escape. On the water, canoeing, rowing and sailing are the perfect way to make the most of the river, coastline and ocean while, on land, its unspoiled countryside can be explored on mountain bikes, horseback and even jeep safaris.

Turismo de Lisboa is a non-profit organisation established through an alliance of public and private bodies operating in the tourist sector. It has around 900 associated members. Since its inception in 1998, the main objective of this association is to improve and increase the promotion of Lisbon as a tourist destination and therefore enhance the quality and competitiveness of the city.