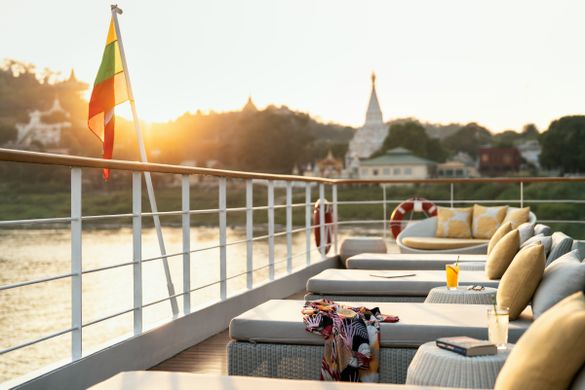 The Strand Cruise on Myanmar’s Ayeyarwady River has recently announced that it is offering 15% off published rates on all sailings between now and the end of the season in April 2020, including departures coinciding with the 2019 Festive season, as well as Chinese New Year, Easter and Myanmar’s annual Water Festival.  The 25-cabin luxury river cruiser will also be waiving all single occupancy surcharges from January 2020 onwards.

Sister property to the legendary hotel, The Strand Yangon, The Strand Cruise plies the majestic Ayeyarwady River between Mandalay and the ancient temple city of Bagan, recently inscribed on UNESCO’s World Heritage List.  Both hotel and cruise are offering 15% off all published rates for travel between now and the end of April 2020 when booking directly online and entering the code GLAM at check out.  Additionally, passengers booking any four-night cruise for travel between now and the end of December 2019 will receive a complimentary 60-minute massage during their cruise.

Highlights from The Strand Cruise’s regular schedule for the coming months include a four-night New Year’s Eve cruise from Bagan to Mandalay departing on Monday 30 December 2019.  Festivities will include a special party on-board on the evening of 31 December with a live band and fireworks from the banks of the river.  The Chinese Year of the Rat will be welcomed during a three-night cruise from Mandalay to Bagan departing on Friday 24 January 2020, while the Easter break can be celebrated during a three-night sailing departing Mandalay on 10 April 2020.

A very special and fun local celebration that passengers can participate in is Myanmar’s annual Thingyan water festival.  Taking place over four days each April, it is a time of great joy and playfulness, as well as religious observance, and is one of the most significant cultural and religious festivals in the Buddhist calendar as the New Year is welcomed.  The Strand Cruise passengers can a voyage to the very heart of Thingyan on a four-night cruise from Bagan to Mandalay departing on 13 April 2020, the first day of the festival.  According to ancient Myanmar tradition, dousing with water is synonymous with New Year as it cleanses you ready for the coming year, so the first four days of Thingyan are marked by lots of water throwing!

The lead in price for a three-night journey on The Strand Cruise between Mandalay and Bagan is from USD 1,300 per person (from GBP 1,005).  The lead in price for a four-night cruise from Bagan to Mandalay is priced from USD 2,100 per person (from GBP 1,623).  Rates include all suite cabin accommodation, excursions and activities as described in the set itinerary, three meals during full sailing days, breakfast on day of disembarkation, soft drinks & local beer, house wine during meals, port charges, English speaking guides and WI-FI in all cabins and public areas.