↓
Home→AUSTRALIA→Queensland→Ovolo the Valley in Brisbane 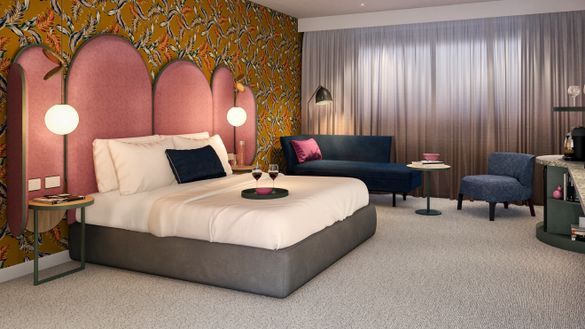 Following its acquisition of Emporium Hotel in January, award-winning Ovolo Hotel Group is continuing to stamp its mark on Queensland’s capital, today announcing a major multi-million-dollar evolution of the iconic property which will see it become the flagship Queensland hotel for the group.

Brisbane’s newest hotel will open as ‘Ovolo The Valley’ in November. The project by acclaimed global architecture firm Woods Bagot, the award-winning designers behind the revitalisation of Brisbane’s Howard Smith Wharves and The Ivy in Sydney, will take Emporium into the new era with a hotel theme inspired by the eclectic culture and iconic history of Fortitude Valley. Ovolo The Valley will draw guests into a whimsical oasis of colour, art, and surprising hints of quirk, curated throughout its 103 rooms.

“There are many new comers to the Brisbane hotel market, but Ovolo’s biggest point of difference is our exceptional customer service and design. We strive to exceed expectations and our rankings and customer feedback says it all. We are confident Ovolo The Valley will be a market leader for Brisbane in the near future,” he said.

“Our brief to Woods Bagot was that each of our hotels must have their own unique personality and style, inspired by local surrounds, culture, heritage and Ovolo’s playful, forward-thinking spirit, and they’ve delivered exactly that with The Valley.

“There is an element of fantasy, escapism and play in The Valley. We’re positioning it as the perfect contemporary oasis to escape our busy urban lives,” said Mr Jhunjhnuwala.

“We’re proud that Girish has chosen yet again to bring his unique Ovolo style and sensibility to Brisbane,” she said.

“The group have seized the opportunity to reposition and deliver one of the city’s most well-known hotels into a new era with the Ovolo The Valley.

“Following on from the Ovolo Inchcolm opening last year, we see the group’s second hotel as a major vote of confidence in Brisbane.

“With investments totalling around $90 million this project is helping to solidify Brisbane’s reputation as a world-class destination.”

Woods Bagot’s Principal and Hotel Sector Leader (Australia), Bronwyn McColl, says the design of Ovolo The Valley celebrates Fortitude Valley’s eclectic mix—the rich colours of the streets and laneways, its social and cultural diversity. At the same time, with rooms inspired by nature for a whimsical luxe experience, it provides an unexpected, private oasis for guests.

“With an eccentric mix of art, fashion, style and a whole lot of fabulous, we’ve created a new personality in Brisbane’s hotel market.

“We started by exploring the spaces behind The Valley’s indiscernible facades and the spaces in-between and translated them into playful yet sophisticated experiences that take the Ovolo guest by surprise – including the most incredible rock star suites in honour of the late David Bowie with 1970s inspired velvet lounges and a gold bar for those who dare!” said Ms McColl.

The interior design for the new hotel’s 103 rooms focus on creating a whimsical oasis for guests, replete with playful and colourful elements and commissioned art pieces, including custom wallpaper and eccentric furniture and illustrations.

Ovolo’s effortless living ethos is no stranger at The Valley with 24-hour room service, large, flat screen televisions, Google Chromecast, additional wall plugs, phone chargers in rooms, and Amazon’s Alexa cloud-based voice service, able to assist guests with just about every command. Ovolo The Valley, like the group’s other hotels, will be a home-away-from-home for those who stay.

While Ovolo The Valley will open next month, work by Woods Bagot in collaboration with former Brisbanite, Chloe Want from AvroKO in New York, will continue on the hotel’s standalone restaurant and bar concept to open on the ground level of the property early next year.

Starting from $300 per night, the opening of Ovolo The Valley will mark another milestone for the boutique hotel brand behind two of Australia’s top five hotels*, and the second Queensland hotel to fall under its design-lead hotel group, following the successful opening of Ovolo Inchcolm in Brisbane’s Spring Hill last year.

Ovolo The Valley is set to lift Brisbane’s hotel market to new heights through design, art and Ovolo’s signature experience.

Welcome to Ovolo The Valley!

For more information and to book, visit: www.ovolohotels.com.au/ovolothevalley/

Renders can be downloaded here.

Founded by Girish Jhunjhnuwala in 2002, Ovolo Hotels has become one of Hong Kong’s largest independent owner, operator hospitality firms, by providing business and leisure guests with the best in effortless living. The company keeps in touch with the modern traveller through award-winning interior designs, detail-driven comforts, focused all-inclusive service and cutting-edge ensuite technology, all done in Ovolo’s signature style.  A proud Hong Kong brand, Ovolo remains a family-owned and privately-operated business with a charitable core. The company now runs four hotels in Hong Kong, and six hotels across Sydney, Melbourne, Canberra and Brisbane.  Ovolo has also recently launched a new brand Mojo Nomad, In Central which opened in September 2018 and in Aberdeen Harbour Hong Kong which opened its doors in December 2017. Mojo Nomad is a co-habitation concept for global nomads that combines travel, lifestyle and community at its core and will be entering the Australian market in the near future.