↓
Home→JetsettersMagazine.com→Peace on the Platforms in Pontresina in Switzerland 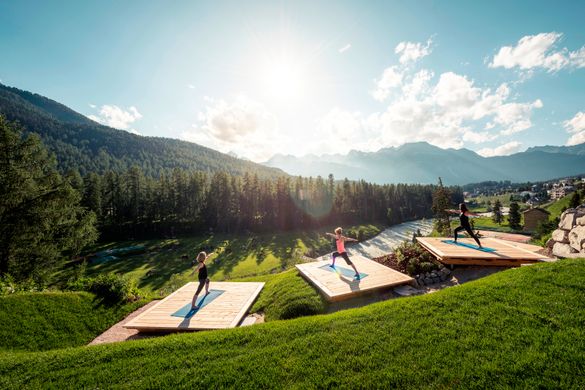 Pontresina, Switzerland – August 2020: Grand Hotel Kronenhof (www.kronenhof.com) is inviting guests to escape for a little peace and quiet on its new socially-distanced spa platforms at one of its Yoga Summits; the first takes place from 7 to 9 August, the second from 4 to 6 September.

The two-night, three-day Yoga Summit gives yogis a chance to find inner calm through meditation, Hatha and Yin Yoga classes, while being at one with nature in the unique Engadine landscape. The view from the spa platforms down across the valley and the sound of the river Flaz gurgling below, plus the scent of the wild flower meadow, provide a wonderful, soothing and inspiring setting that guests can take away to use as an effective visualization tool at times of stress when back home.

The Summit’s Vinyasa Flow morning classes start at 7:30am so that the group can experience the first rays of sunlight touching the platforms at around 8:30am. During these morning classes, nature lies fresh and pristine all around, creating a special energy and atmosphere that provides strength for the day ahead. The late afternoon Yin Yoga sessions with Meditation start at 5:00pm, so that participants can witness the “golden hour” with the slow setting of the sun and, weather dependent, a local phenomenon called the ‘Maloja snake’, a stream of wispy white clouds that float through the valley; a super relaxing way to end the day.

The Yoga Summit is led by Alessandra Stecher (https://www.yogaengadin.com/), a qualified yoga, Pilates, gymnastics and contemporary dance teacher, who focuses on flexibility, body awareness and deeper relaxation through conscious breathing. The hotel’s motto – “come up (to the mountains) to slow down” – perfectly summarises the benefits of this long weekend programme. And, with a maximum of just six participants per Summit, each guest is guaranteed individual attention as and when they need it.

Grand Hotel Kronenhof (www.kronenhof.com), located in Pontresina, six miles from St. Moritz, offers the best of both worlds: the chance to enjoy the glitz of St. Moritz, while staying in a peaceful mountain village.

Grand Hotel Kronenhof has a rich and interesting history, having first opened its doors in the first half of the 19th century as a guesthouse. However, the main part of the current building, which is a registered historical landmark, was built at the very end of the 19th century in Neo-Baroque style. The latest wing, completed in November 2007 and costing CHF 35 million (approximately £24 million), consists of 28 new guest rooms and a stunning spa complex covering more than 2000 square metres. More recently, the internationally-renowned interior architect Pierre-Yves Rochon has been renovating a few guest rooms per year, in his own inimitable style, along with the creation of an elegant cigar lounge and adjoining billiards room.

The spa is certainly one of the hotel’s highlights and has been named “the best Alpine spa” (according to Tyler Brule writing in the FT, November 2009). Facilities include a 20m indoor infinity pool with counter-current system, a flotation pool with underwater music, a wide range of saunas and steam rooms, a luxurious private suite for couples to enjoy wraps and massages together, and – for the perfect final touch – a crackling log fire in the relaxation room.

Gourmet cuisine is also a specialty at the Grand Hotel Kronenhof. Awarded the title of GaultMillau Hotel of the Year in 2009, it has three restaurants (the formal Grand Restaurant in an elegant Neo-Baroque vaulted room, Gourmet Restaurant Kronenstübli serving Italian-Mediterranean cuisine with 16 GaultMillau points and the informal Le Pavillon for light lunches). In addition, the hotel features a 19th-century original bowling alley where Swiss raclette is served.

Finally, Grand Hotel Kronenhof is renowned for its extensive children’s activities and facilities (a kids’ playroom and Rondelle, a restaurant just for younger members of the family).

Recent awards for the Grand Hotel Kronenhof include:

Both the Grand Hotel Kronenhof and its sister property Kulm Hotel St. Moritz are owned by the Niarchos family