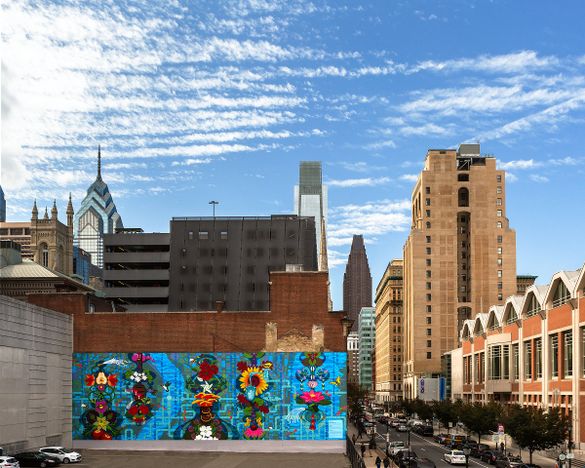 With open-air experiences and wide-open spaces likely to remain popular once international travel returns, Philadelphia CVB has put together a list of outdoor hidden gems that future travellers to the East Coast city can experience when walking around Philadelphia’s Downtown City Centre.

Thanks to its easily walkable streets lined with colourful public art, urban explorers can wander through the city’s open-air gallery of Mural Mile marvelling at mosaics or enjoy exploring the buzz of Philadelphia’s East Market District, home to America’s largest and oldest public market. Philadelphia’s Downtown City Centre also has an abundance of green spaces such as Rittenhouse Square, which is home to a year-round farmers market and many of the city’s most popular outdoor sculptures.

Below are some of the hidden gems of Philadelphia’s walkable Downtown City Centre:

Marvel at Mural Mile
Unknown to many, Philadelphia is home to the US’ largest public art program which gives UK travellers to the city the chance to walk through Downtown Philadelphia’s vibrant commercial district to marvel at the city’s open-air art gallery. Weave through residential streets on foot and be inspired by the extraordinary public art that makes Philadelphia the Mural Capital of the World. A walk along the Mural Mile highlights art both tucked away in unassuming corners and those that act as soaring additions to the cityscape, like the incredible Water Gives Life artwork, by local artists Euhri Jones and David McShane.

Explore Philadelphia’s Buzzing East Market District
Serving as the gateway to the city’s business, shopping and entertainment district, East Market District has a buzzing atmosphere year-round thanks to attractions such as Reading Terminal Market, one of America’s largest and oldest public markets, City Hall and a number of independently owned boutiques which give the area a distinctly local flavour. Future visitors to this district should consider a stay at the recently opened Canopy by Hilton Philadelphia Center City. The 236-room property is perfectly situated for those keen to explore the city by foot or on one of the hotel’s complimentary Canopy Bikes. Travellers can unwind after a day of sightseeing at the hotel’s 10,000 square foot courtyard compete with swings and café tables or at its brasserie The Wayward which serves American classics complete with notes from French bistros and some of the best oyster and gin offerings in the city.

Take in the Sights, Sounds and Smells of Rittenhouse Square on Foot
The perfect spot for a relaxing weekend walk thanks to its location in the heart of Philadelphia’s city centre, Rittenhouse Square is known for its green spaces, charming brownstones, alfresco dining, and the year-round Rittenhouse Square Farmer’s Market, held every Saturday morning on Walnut Street. Travellers can take in the sights of the tree-filled park when strolling alongside its fountains and sculptures before relishing in the sounds and smells of the market. Walkers will soon find themselves lost between stands selling hand-painted chocolates, local wines and spirits and artisan bread, as well as an abundance of other goods from farmers throughout the Philadelphia region. Why not take a moment of peace to rest and feast on a picnic of delicacies purchased from sellers, on one of the parks manicured lawns.