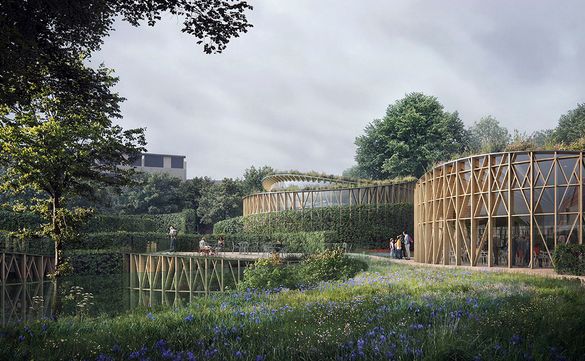 In the summer of 2021, the new Hans Christian Andersen museum will open in Odense in Denmark. It will be a brand-new museum that will rethink how the story of Andersen’s life and work is told.

The Danish author Hans Christian Andersen is among the most famous and read authors in world history, admired everywhere for his fantastical fairytales. Starting in the summer of 2021, his stories will serve as the foundation of a brand-new type of museum, which will not simply communicate about Andersen, but as Andersen:

“We have to dive into the fairytales as the very first thing, because they are what everyone knows. The idea is not to retell the stories, but rather to communicate their familiarity and inspire further reading of Andersen,” says Torben Grøngaard Jeppesen, the head of Odense City Museums.

The vision for H.C. Andersen’s House is to create a complete artistic experience in which architecture, sound, light and a stream of images constantly invite new encounters between each visitor and Andersen’s fairytales.

”Hans Christian Andersen’s artistic universe is fantastic, because it reverses how you imagine this world you thought you knew, but without putting anything else in its place. His fairytales do not point towards a universal truth, but rather into the open – towards the peculiarity and multiplicity of the world,” explains Creative Director of the new museum, Henrik Lübker.

“In the new museum, we maintain this ambiguity by using Andersen’s own artistic strategies as the starting point for how the garden, the house and the exhibition have all been shaped, as well as for the many artistic contributions that will also be part of the museum,” continues Lübker.

Poetic museum architecture
The new museum is designed by esteemed Japanese architect Kengo Kuma and his team, who are also behind the new Olympic stadium in Tokyo. As part of the design process, Kuma has found inspiration in Andersen’s fairytale ‘The Tinderbox’, in which a tree reveals an underground world full of new perspectives.

”The idea behind the architectural design resembled Andersen’s method, where a small world suddenly expands to a bigger universe,” explains Kengo Kuma.

The site covers an area of 5,600 square meters and contains a children’s house and an underground museum, which intertwines with a surrounding magical garden.

The new museum will be one of Denmark’s largest and most ambitious museums, and it has been made possible through a substantial donation from The A.P. Møller Foundation, and contributions from Nordea-fonden, The Augustinus Foundation, Knud Højgaards Fond and the City of Odense.