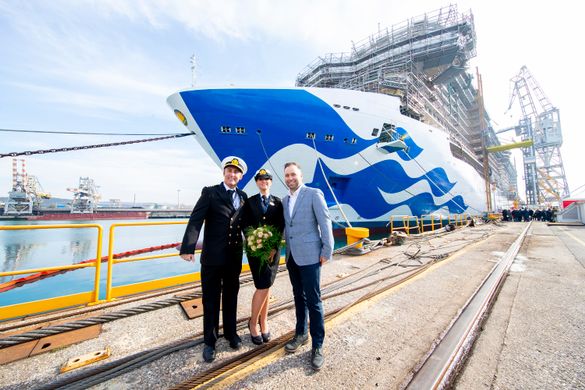 Princess Cruises has celebrated significant milestones for each of its three ships currently under construction. In an industry-first, events took place at Fincantieri shipyard in Monfalcone, Italy, to mark the construction progress for each of the 3,660-guest Sky Princess, Enchanted Princess and a sixth Royal-class ship yet to be named.

For Sky Princess, which will launch in October this year, a ‘Madrina’ ceremony was held. The ceremony saw Kerry Ann Wright, a Glasgow-based second officer for Princess Cruises, wish the ship a safe onward journey with a blessing at the shipyard. Kerry Ann began her career at sea working in the onboard hotel department before beginning her own deck cadetship.  After several years of study she qualified as an officer of the watch in 2015 and gained her Chief Mates license in 2018, leading to her present role on sister ship, Royal Princess. She was nominated as Madrina by her fellow crew members.

For Enchanted Princess, which is due for completion next year, a keel laying ceremony took place. Following a traditional blessing, executives from Princess Cruises and Fincantieri kicked off the countdown to completion of the fifth Royal-class ship by ceremoniously lowering a 500-tonne keel – the bottom-most part of the ship – into position in the drydock. Representatives and invited guests then participated in a traditional ‘good luck’ coin ceremony, which comprised welding an Ocean Medallion into the ship.

Enchanted Princess will launch in Southampton in June 2020.

Finally a steel-cutting ceremony was held for the final Royal-class ship. The ceremony took place during a live broadcast from Naples, Italy, and marked the cutting of the first plates of steel. These signaled the beginning of construction of the ship scheduled to launch in 2022.

With two further ships on order for delivery in 2023 and 2025, Princess Cruises will increase its capacity by 32% over the next six years.

Jan Swartz, Princess Cruises and Carnival Australia group president, said: “The number of people enjoying cruise holidays has increased, on average, by more than one million every year over the last decade, an increase of more than 68 percent.

“As we continue to grow our fleet with five new ships arriving by 2025 – maintaining our position as the fastest growing premium cruise line in the world – we’re proud to not only celebrate these three major construction milestones in the same day but also to continue to innovate our product with cutting-edge technology and elevated guest experiences that will be offered on all of these ships.”

Following the launch of both Sky Princess and Enchanted Princess in 2019 and 2020 respectively the ships will spend a short season in the Mediterranean. They will be the first new ships to join the Princess Cruises fleet fully-activated with Ocean Medallion.

Recently-announced features to appear on Sky Princess and Enchanted Princess include:

·        Two ‘Sky Suites’, the largest balconies at sea, which will be centrally located on the ships’ top decks. One will measure 1,012 square feet and the other 947 square feet, each around the size of half a tennis court. The suites will provide a private vantage of the ships’ top deck Movies Under the Stars cinema screen, offering 270-degree panorama views and sleeping up to five guests. They will feature two bedrooms, two bathrooms and a dining area with skylight

·        The Ocean Medallion, which is around the same size as a 10p piece and is fully-automated with no visible technology such as an on-off switch or charging function. The Medallion offers enhancements to the guest experience such as a streamlined embarkation process, keyless stateroom access, on demand beverage delivery and OceanCompass, which provides interactive directions throughout the ship and allows guests to easily locate friends and family

·        A redesigned Sanctuary area, the spa-inspired top deck retreat reserved for adults. The Sanctuary will feature an upgraded, contemporary design including twice as many private cabanas as its sister ships, new lounge furniture and the option for guests to indulge in a spa treatment

For more information or to book visit www.princess.com, speak to your local travel agent or call 0344 338 8663.

Images can be downloaded here – https://spaces.hightail.com/receive/6HQOUbughe

Fare price based on two guests sharing an inside stateroom.

About Princess Cruises:
One of the best-known names in cruising, Princess Cruises is a global premium cruise line and tour company operating a fleet of 17 modern cruise ships, carrying two million guests each year on 170 itineraries to more than 380 destinations around the globe, including the Caribbean, Alaska, Panama Canal, Mexican Riviera, Europe, South America, Australia/New Zealand, the South Pacific, Hawaii, Asia, Canada/New England and World Cruises. Itineraries range in length from three to 111 days.

In 2017 Princess Cruises, with parent company Carnival Corporation, introduced MedallionClass cruises enabled by the Ocean Medallion – the cruises industry’s most advanced wearable device, provided free to each guest sailing on a MedallionClass ship. The award-winning innovation offers the fastest way to a hassle-free, personalised cruise, giving guests more opportunity to enjoy their time onboard. Ocean Medallion will be activated on five ships by the end of 2019. An activation plan will continue across the global fleet in 2020 and beyond.

Three new Royal-class ships are currently on order with the next new ship, Sky Princess, under construction scheduled for delivery in October 2019. Princess recently announced that two new (LNG) ships which will be the largest ships in the Princess fleet, accommodating approximately 4,300 guests with expected delivery in 2023 and 2025.  Princess now has five ships arriving over the next six years between 2019 & 2025. The company is part of Carnival Corporation & plc (NYSE/LSE: CCL; NYSE:CUK).