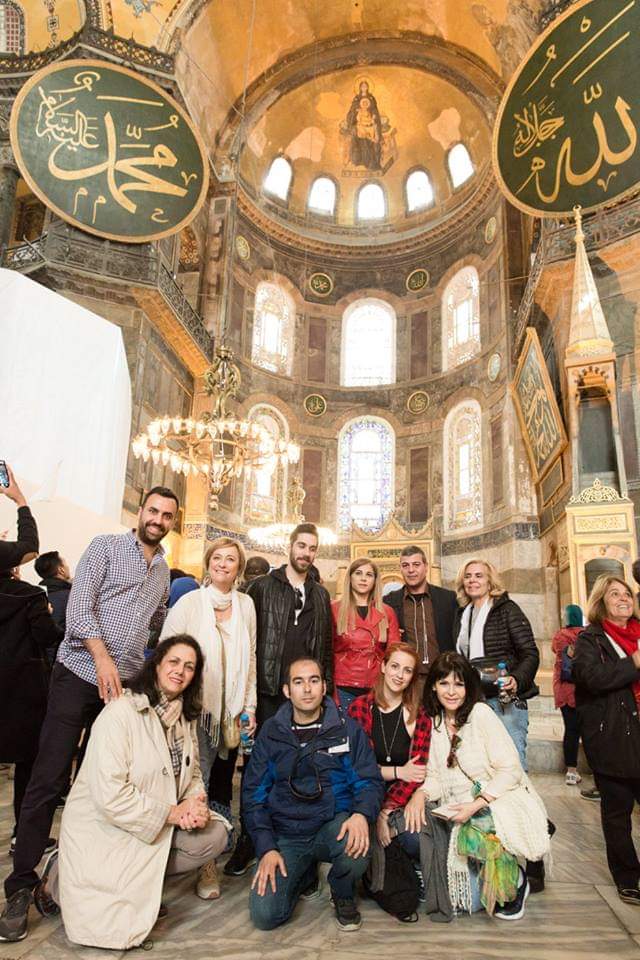 Day 1 – Istanbul (-,-,-)Arrive to Istanbul and transfer to the hotel. Free day at leisure

Day 2 Istanbul (B,L,-)After breakfast full day old city tour and visit St. Sophia, Blue Mosque, Hipodrome Square, Topkapi Palace and Grand Bazaar. St. Sophia, officially the Holy Hagia Sophia Grand Mosque and formerly the Church of Hagia Sophia, is a Late Antique place of worship in Istanbul, designed by the Greek geometers Isidore of Miletus and Anthemius of Tralles.Built in 537 as the patriarchal cathedral of the imperial capital of Constantinople, it was the largest Christian church of the eastern Roman Empire and the Eastern Orthodox Church, except during the Latin Empire from 1204 to 1261, when it became the city’s Latin Catholic cathedral. In 1453, after the Fall of Constantinople to the Ottoman Empire, it was converted into a mosque. In 1935, the secular Turkish Republic established it as a museum. In 2020, it re-opened as a mosque. Topkapi Palace, or the Seraglio, is a large museum in the east of the Fatih district of Istanbul in Turkey. In the 15th and 16th centuries it served as the main residence and administrative headquarters of the Ottoman sultans. Sultan Ahmed Mosque, also known as the Blue Mosque, is an Ottoman-era historical imperial mosque located in Istanbul, Turkey. A functioning mosque, it also attracts large numbers of tourist visitors. It was constructed between 1609 and 1616 during the rule of Ahmed I. Its Külliye contains Ahmed’s tomb, a madrasah and a hospice. Hand-painted blue tiles adorn the mosque’s interior walls, and at night the mosque is bathed in blue as lights frame the mosque’s five main domes, six minarets and eight secondary domes. It sits next to the Hagia Sophia, the principal mosque of Istanbul until the Blue Mosque’s construction and another popular tourist site. The Blue Mosque was included in the UNESCO World Heritage Site list in 1985 under the name of “Historic Areas of Istanbul”. Sultanahmet Square, or the Hippodrome of Constantinople is a square in Istanbul, Turkey. Previously, it was a circus that was the sporting and social centre of Constantinople, capital of the Byzantine Empire. The Grand Bazaar in Istanbul is one of the largest and oldest covered markets in the world, with 61 covered streets and over 4,000 shops on a total area of 30,700 m2, attracting between 250,000 and 400,000 visitors daily. In 2014, it was listed No.1 among the world’s most-visited tourist attractions with 91,250,000 annual visitors. The Grand Bazaar at Istanbul is often regarded as one of the first shopping malls of the World.

Day 3 Istanbul (B,L,-)After breakfast full day Princes Islands Tour. Take a leisurely 28-kilometer cruise through the Sea of Marmara to the unspoiled charms of Buyukada. The largest of the Prince’s Islands, Buyukada boasts lush foliage, pine forests, turn of the century wooden mansions and incomparable views of Istanbul. Best of all, cars are banned, so you travel by horse-drawn carriage

Day 4 Istanbul (B,L,-)After breakfast full day Bosphorus tour and visit Spice Market, Eminonu, Dolmabahce Palace and Cruise on Bosphorus. A leisurely cruise along the fabulous Bosphorus, starting near the Black Sea and taking us past Ottoman palaces, wooden 19th century waterfront mansions, modern pleasure palaces and fortresses. The perfect opportunity for taking photographs along both shores of this fabled waterway. The Spice Bazaar in Istanbul, Turkey is one of the largest bazaars in the city. Located in the Eminönü quarter of the Fatih district, it is the most famous covered shopping complex after the Grand Bazaar. Eminönü is a former district of Istanbul in Turkey, currently a quarter within the Fatih district, which is the capital district of Istanbul and of Istanbul Province. Dolmabahçe Palace located in the Beşiktaş district of Istanbul, Turkey, on the European coast of the Bosporus strait, served as the main administrative center of the Ottoman Empire from 1856 to 1887 and from 1909 to 1922.

Day 5 Istanbul (B,L,-)Take a break from the crowded streets of Istanbul with a day-trip to the city of Bursa! After a convenient hotel pick-up, scenic drive and ferry trip, you’ll arrive in Bursa. Our guide will take you to see all the main sights including the Grand Mosque, the Green Tomb and its famous Iznik tiles, a 600 year old tree, and the Bursa Silk Market. There are many delicious treats you might like to buy too such as freshly made Turkish Delight, jams and honey. Next, take the chair lift up to the famous Uludağ Mountain and enjoy the view. Uludağ Mountain is 2,543 metres high and is a very popular place for winter sports in Turkey. If the cable car is closed due to bad weather, you’ll be driven to our lunch spot in our tour vehicle. Lunch will be served at a restaurant 800 metres up the mountain! If the weather is fine, you’ll have some free time to explore the beautiful National Park as well. In the late evening, you’ll be returned to your hotel in Istanbul with many wonderful memories of Bursa!

Day 6 Istanbul (B,-,-)After breakfast free day at leisure and transfer to the airport and flight back home