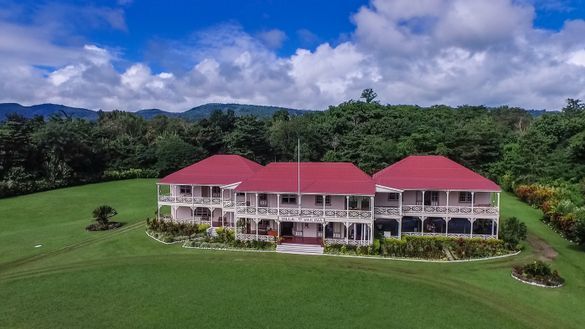 November 13th marks Robert Louis Stevenson’s 170th Birthday. Many recognise the writer for his famous novels The Strange Case of Dr. Jekyll and Mr.Hyde and Treasure Island. Yet if you ask a Samoan about Stevenson, they will know him more intimately as a much-loved figure of the island’s past, being described as the man with great ‘manas’, or spiritual power. The Samoan people also granted Stevenson the fitting nickname of “Tusitala”, meaning “Storyteller”.

Seeking a warmer climate due to his declining health, Stevenson set off on a yachting holiday into the South Seas in 1888. However, after visiting Samoa and becoming captivated with its people and beautiful surroundings, the writer never returned to his birthplace of Scotland. Instead, he lived his remaining days in Samoa, becoming a much-esteemed member of the community. Stevenson had found his very own Treasure Island, brimming with the golden warmth of the Samoan community and rare jewels of unique wildlife and scenery. Sadly, the novelist died in 1894 aged 44, being buried on Mount Vaea which looks out onto the sea that bought him to the island many years prior.

Emeritus professor at the University of Strathclyde, Joseph Farrell, visited Samoa on five occasions, being inspired by his surroundings to write his book, Robert Louis Stevenson in Samoa. Farrell uses Stevenson’s very own words from a personal letter sent in April 1891 to describe his experiences of the islands:

“This place is beautiful beyond dreams; some fifty miles of the Pacific spread in front, deep woods all around, making the sky a corded profile of huge trees upon our left; about us, the little island of our clearing (Vailima) … it is a good place to be, night and morning; and the moon makes the night a piece of heaven. If you could see this place! It will be a home for angels.”

Traces of Robert Louis Stevenson’s touch on the islands has remained with his house in Vailima, near Apia, the largest house in Samoa. Yet, it can also be seen that Samoa touched Stevenson too as his study is adorned with tapa, an authentic Samoan bark cloth, and a photo of the writer and his Samoan companions can be found amongst his personal belongings.
Today, visitors can explore Stevenson’s house which is now a museum displaying personal items, family memorabilia and excerpts of his work, making it the most visited house in Samoa. Visitors can also pay their respects to the author of their favourite classics by visiting the burial site on Mount Vaea which looks down upon Stevenson’s house and can be found three kilometres away from Apia city centre. The attraction won a Trip Advisor Travellers’ Choice award this year, meaning that it is one of the best and most consistently rated properties on the popular review site.
Whether you are a fan of the works of Stevenson, or simply want to learn more about the great “Tusitala”, come and discover the setting behind author’s final chapter. Happy Birthday Robert!
More information on Joseph Farrell’s book, Robert Louis Stevenson In Samoa (2017, MacLehose Publishing), can be found here.
For updated information on future travel to Samoa visit www.samoa.travel, www.samoagovt.ws as well as the UK FCO website.
-ENDS-
For more information please contact:
Samoa Tourism Authority
Tel: +44 208 877 4512
E-mail: samoa@representationplus.co.uk
Visit: www.samoa.travel
Notes to editors:
Samoa: The Treasured Islands of the South Pacific
The islands of Samoa – The Treasured Islands of the South Pacific – are the true heart of Polynesia. Ten islands of stunning wild beauty, Samoa – or Independent Samoa as it is now known so as to avoid confusion with American Samoa, is paradise waiting to be explored. From powder soft beaches, to warm tropical seas, colourful coral reefs alive with marine life. The rugged, lush interiors reveal endless wildlife, waterfalls and hiking trails.