↓
Home→USA→Florida→Miami→Run, Sun and Plenty of Fun in Florida 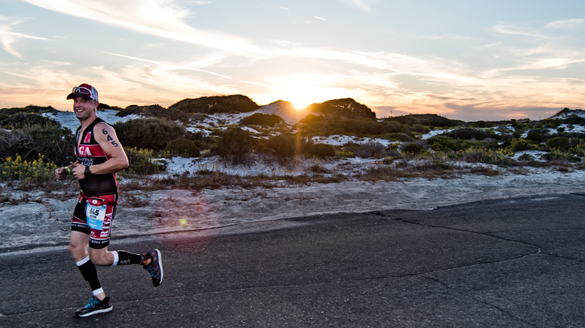 A good run is an escape in itself, but with the Sunshine State’s diverse range of fun runs, marathons and triathlons, that wind through Florida’s landmarks and natural beauty, there’s even more reason to get outdoors and explore Florida.

‘Rock out’ while you run at the fun and unique Blue Angel Rock ‘N’ Fly Run on March 23. A fighter jet flyby launches the 5K or half marathon course which trails through scenic Pensacola Naval Air Station. With plenty of rock ‘n’ roll music stops, DJ and musical water stations along the route, you won’t want the course to end! Fear not. After completing the race, you can join continue to party at the great post-race event with waterfront views, more live music, and refreshments. Yee- haw!

The aptly named island of Marathon, in the Florida Keys, hosts one of Florida’s most scenic fun run. The 38th Annual 7 Mile Bridge Run sets the pace on April 6, when runners stride across the iconic Seven Mile Bridge; one of the longest segmental bridges in the world. It’s the centerpiece of the 113-mile Overseas Highway, which connects the Florida Keys to mainland Florida. You’ll be guaranteed stunning ocean views the whole way.

The 4th annual 30A Half Marathon and 5k run combines food, running and charitable giving over three sun-filled days from October 11, in South Walton, located in Northwest Florida. The event starts with a bang(er) at the 30A BBQ festival, where local businesses compete for ‘Best BBQ on the coast’. Saturday sees racers take part in Packet Pickup and Expo day, featuring unique local business offering silent auction items and special offers. Sunday is race day, when the real hard work starts. Beginning with the half marathon, then a 5K race, followed by awards and entertainment. The entire event benefits The Sonder Project, which builds schools and wells in Africa.

What began as a challenge between groups of Navy SEALS has become one of the most recognised endurance events in the world. IRONMAN returns to the shores of Panama City Beach on May 11 for the half triathlon (perfect for first timers) while the full marathon returns on November 2 (for avid athletes). Athletes swim 1.2 or 2.4 miles in the Gulf of Mexico, bike for 56 or 112 miles, and then run a half or full marathon, which loops through St. Andrews Park (a favourite among participants for its shaded areas and wildlife). The challenge serves as one of the most popular races on the circuit and is one of the longest in North America. Panama City Beach has proven to have the best combination of temperature and terrain for this triathlon competition.

As the Sunshine State’s No. 1 industry, tourism was responsible for welcoming 126.1 million visitors in 2018. Based on the latest economic impact study, in 2016, Florida visitors spent $112 billion, supporting 1.4 million Florida jobs. According to the Office of Economic and Demographic Research, for every $1 the state invests in VISIT FLORIDA – the official tourism marketing corporation for the State of Florida – $2.15 in tax revenue is generated. VISIT FLORIDA promotes tourism to Florida through sales, advertising, promotions, public relations and visitor services programs.