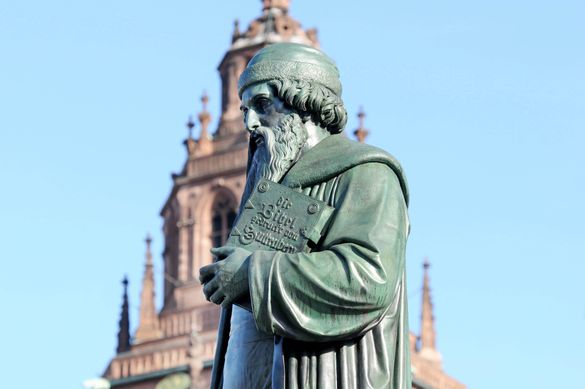 The histories of the various Romantic Cities are associated with many famous and distinguished visionaries who had somewhat set the course for the present as we know it. Philosophers, bishops and athletes: numerous personalities have left their mark. See this for yourself. Set off on a journey of discovery and immerse yourself in the more than two millennia of history of the Romantic Cities on the Rhine and Moselle.

Koblenz
Clemens Brentano, German author, poet and main exponent of Heidelberg Romanticism, is considered one of the city’s most famous sons: born and raised in Ehrenbreitstein, today’s Koblenz, he was forever immortalised in the chronicle of German poetry, primarily with his ‘Des Knaben Wunderhorn’, a collection of German folk poems and songs.

Maria Magdalena van Beethoven, mother of the future world-famous composer Ludwig van Beethoven, was also born in Koblenz. Her birthplace in Ehrenbreitstein today houses a museum. It is indisputable that the city of Koblenz abounds with historical figures. Queen Victoria also joined the ranks when she visited Koblenz and stayed at Stolzenfels Castle during her journey down the Rhine in 1845. If the name Baedeker appears on your travel guide while on your next trip, you would be holding a piece of Koblenz history in your hand: Karl Baedeker was a German publisher and the author of the eponymous travel guide; his publishing company was located in Koblenz.

Worms
A certain convocation of politic worms are e’en at him. Your worm is your only emperor for diet.’ William Shakespeare alluded to the Diet of Worms in the immortal words of Hamlet, bringing it to the attention of the English-speaking world in the early 17th century. Almost 400 years earlier, an English royal wedding between Frederick II and his English queen Isabella Plantagenet had taken place in Worms Cathedral, where Pope Leo IX had been elected pope in 1048. A commemorative relief is still displayed at the town hall.

Tradition has it that Richard the Lionheart was imprisoned in Worms during his period of captivity. However, the city of Worms was primarily influenced by its Jewish heritage: Rabbi Meir of Rothenburg is the city’s most famous Jewish son—his grave can be visited at Heiliger Sand, the Jewish cemetery. Martin Luther also visited the city in the course of the Reformation: he appeared before the Diet in 1521, where the emperor and the Holy Roman Empire demanded that he revoke his writings.

Trier
Karl Marx, one of the most influential socialism and communism theorists, is a constituent of Trier’s historical heritage. Born in 1818, the future father of Marxism spent the first 17 years of his life in Trier. The permanent exhibition at his birthplace on Brückenstrasse attracts numerous visitors from all over the world every year.

The story of Constantine the Great can also be traced back to the city on the Moselle: the former Roman emperor and future autocrat administered his territories from Trier. It was due to him that Trier became the imperial residence and Christianity finally became a European religion. His mother, Empress Helena, also has a place in Trier’s past. She is regarded as one of the city’s most influential female figures: her son Constantine brought her to Trier and granted her imperial honours when he was proclaimed emperor. The Basilica of Constantine, which has been a UNESCO World Heritage Site since 1986, still dominates Trier’s skyline. Built as a throne room at the beginning of the fourth century, it is nowadays a Protestant church.

Mainz
The most famous son of the city of Mainz is undisputedly Johannes Gutenberg. The inventor of letterpress printing with movable type, born in today’s state capital in 1400, laid the foundation for modern mass communication as early as the 15th century. This is why tourists from all over the world flock to the Gutenberg Museum year after year, immersing themselves in history.

The most prominent of Mainz’s contemporary personalities is most certainly Jürgen Klopp, aka Kloppo: kicking off his career at 1. FSV Mainz 05, he moved to Borussia Dortmund and finally Liverpool F.C., where ‘the Normal One’ soon became the darling of the people.

Speyer
The city of Speyer is renowned for its rich variety of culinary delights. Former German Chancellor Helmut Kohl was well aware of this, as his frequent visits to the city clearly demonstrate. The Rhineland‑Palatinate native was interred in Speyer’s old cemetery in 2017. The Emperor’s Table, an 800-m-long imperial dinner table laid for more than 1,000 guests, is traditionally held in Speyer. This extraordinary culinary event has its origins in the 12th century when Emperor Constantine III stationed his retinue of some hundred soldiers in Speyer and demanded that the city provide them with food and drink.

Idar-Oberstein
What do Bruce Willis and Idar-Oberstein, the gemstone town, have in common? The son of an American soldier, the Hollywood star spent the first two years of his life in Germany, until the family finally moved to the United States in 1957. He started acting while still at school and achieved fame with a guest appearance in Miami Vice and his role in the successful Die Hard franchise.

The town’s history dates back to antiquity and the Middle Ages when it was governed by the Lords of Oberstein. The story of the von Oberstein brothers Wyrich and Emich is closely entwined with that of the town’s famous landmark, the Felsenkirche church: legend has it that Wyrich, in atonement for the murder of his brother out of jealousy, built the chapel with his own hands on the exact place where his brother died.

GDKE
The Rhineland‑Palatinate Directorate General for Cultural Heritage is responsible for the state’s cultural heritage. This also holds for Ehrenbreitstein Fortress, the second largest preserved fortress in Europe. At 118 metres above the Rhine, it is not only the impressive panorama that makes a lasting impression: vibrant and authentic enactments and tours led by guides in period costume familiarise visitors with military life and make for an unforgettable experience for young and old.